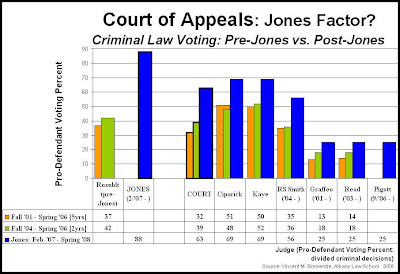 The graph does so by depicting the frequency with which the court rendered pro-defendant decisions in criminal cases before and after Jones' appointment. More specifically, it depicts the before and after percentages of the nonunanimous criminal decisions in which the majority of the court took a position more favorable to the rights of the accused than did the dissenter(s) on whatever issue divided the judges. In short, the percentage of times the majority (the court) was more pro-defendant than the dissent. And the graph does so for the five year period (fall '01 through spring '06) prior to Jones' appointment and for the nearly one and one-half year period (February 2007 through spring '08) since his appointment. (The most recent two year period of the pre-Jones five years (fall '04 through spring '06) is also depicted to show that the pro-defendant shift actually did begin with Jones' appointment, and not sometime shortly beforehand.)

The graph also depicts the voting percentages for the individual judges. Most notably, perhaps, is the difference in the voting pattern between Jones and the judge he replaced, Judge Albert Rosenblatt. Whereas Rosenblatt's voting record was 37% and 42% pro-defendant, respectively, for the five-year and two-year pre-Jones periods, Jones' record to date is 88% pro-defendant. [That's a figure that has not been seen at the Court of Appeals since Judge Vito Titone--by far the most sympathetic to the rights of the accused of any member of the court during his tenure.]

The remaining three members of the court--all Pataki appointees--Judges Victoria Graffeo, Susan Read, and Eugene Pigott, have strongly pro-prosecution voting records. They have each voted 25% pro-defendant since Jones' appointment.

There is much else to note in the decisional and voting records depicted on the graph. Suffice it to say that on the seven member New York Court of Appeals, three of the judges compiled strongly pro-defendant voting records in the year and a half since Judge Jones joined the court: Kaye, Ciparick, and Jones himself. Additionally, the voting record of Judge Smith reveals that, more often than not, he too has been siding with the defendant in the difficult, divisive cases. Indeed, he has been voting for the accused twice as frequently as the other three Pataki appointees, Graffeo, Read, and Pigott.

And the result, as we've been discussing, is that the court has been deciding cases in favor of the accused much more frequently than it was previously. Jones' 88% certainly seems to be a factor.