Supreme Court: Justices In The Majority 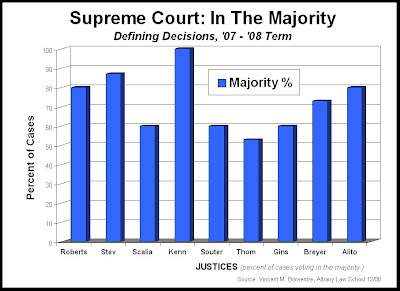 This graph (along with the reorganized one at the end of this post) depicts how frequently each Supreme Court Justice was part of the Court's majority in the "defining decisions" discussed in several earlier posts. In other words, the graph shows the percentage of those particularly revealing cases decided in the '07-'08 term in which each Justice voted with the winning side. The figures reflect a fairly wide range among the Justices of agreement, or alignment, with the Court's decisions. From Justice Kennedy's 100%, to Justice Thomas's 53%.

Following Kennedy, Justice Stevens and then Chief Justice Roberts and Justice Alito were most frequently in the Court's majority. Following Thomas, Justices Scalia, Souter and Ginsburg were equally in the majority the least. Justice Breyer fell midway between the two groups.

Notably, the division between those Justices who were most frequently in the majority and those who were least frequently does not break down along ideological lines. Instead, the breakdown is along the grounds of ideological strength or purity. As would be expected, Kennedy, the moderate swing vote, tops the list as the Justice most often a part of the Court's majority. He was on the winning side in every one of the "defining decisions." He was followed by liberal Stevens (87%) and, then, conservatives Roberts (80%) and Alito (80%). At the other end of the agreement/alignment spectrum are the Justices whose records are even more strongly ideological. Hence, Thomas (53%), perhaps the Court's most ideologically conservative member, was the Justice least often on the winning side. He was followed by three other Justices who also have strongly ideological voting records: very conservative Scalia (60%) and very liberal Souter (60%) and Ginsburg (60%), with the same agreement/alignment records. The remaining Justice, liberal Breyer (73%), fell midway between the highest, Kennedy, and the lowest, Thomas.

This order and these figures are somewhat different than those given by others for the '07-'08 term. For example, Supreme Court litigator and SCOTUS blogger, Thomas Goldstein, has agreement/alignment with the majority in the following order: Roberts, Kennedy, Alito, Scalia, Breyer, Souter, and then Stevens, Ginsburg and Thomas in last place together. (His order is, of course, the same when he considers all the Court's decisions or only the non-unanimous ones. When the pool is limited to non-unanimous decisions, Goldstein's percentages do change. But because the same pool of unanimous cases is removed from all the calculations, the ordering is unaffected.)

The difference between the order and figures determined by others, such as Goldstein, and the ones presented here is simply explained. The pool of cases is very different. Goldstein's calculations, for example, are not based upon a particular set of decisions. Rather, his are based on the entire variety of decisions: the non-ideological as well as ideological, the commercial and technical as well as constitutional and criminal, the purely procedural as well as the substantive and policy-laden, non-political as well as political, the non-controversial as well as the hot-button, etc., etc. As explained in earlier posts on the New York Court Watcher, the focus here has been limited to those especially telling, highly charged "defining decisions" which entail strong ideological, philosophical and cultural values and interests. (See GRAPH-ic Total Recap - Supreme Court's 2007-08 Term: The Defining Decisions (Discrimination+Cultural Issues+Law & Order+Political Process), Nov. 26, 2008, and the several preceding posts in the series which are cited therein.) Just as those decisions are more revealing, so too are the order and figures based on them for agreement/alignment with the majority. They tell which Justices are in the majority and not--i.e., winning and not--in the cases which the Justices and the American public care most deeply about, have the strongest feelings about.

The next post will take a closer look at these agreement/alignment order and figures. In the meantime, as promised above, here's another graph. It provides another way to look at the same data depicted in GRAPH 1 above. It puts the Justices in order of their respective agreement/alignment with the majority, the scale is the actual number of decisions rather than percentages, and it also includes the flip-side of agreement/alignment--i.e., voting in dissent.

GRAPH 2: Frequency in the Majority and Dissent (#)
(click to enlarge) 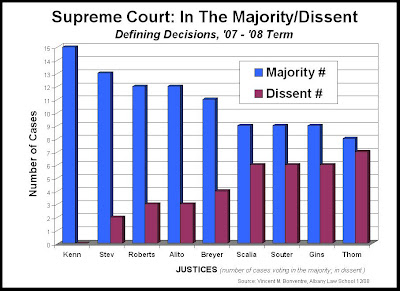