Chief Justice Abrahamson Gets Another Term!! -- and other Great Women Chiefs

It's a wonderful piece of news for all who care about having the very best judges on our courts--and who care about the quality and direction of case law in America. Wisconsin's venerable Chief Justice, Shirley Abrahamson, has won another term. A landslide reelection on Tuesday earned Abrahamson her fourth 10 year term on the state's Supreme Court.

Actually, what earned the Chief Justice a fourth term is the fact that she is a legal and judicial treasure, not only for her state, but for the entire nation. Among those who study courts in America, state as well as federal, she certainly ranks as one of the country's truly great judges. She would be on any legitimate list of the nation's very best judges. She is extraordinary. Extraordinarily bright, energetic, capable, sensible, effective, influential, etc., etc., etc.

And lovable. [E.g., she recently braved a blizzard, a canceled flight, a night stranded at the airport, and the next morning's dawn's early flight to get to Albany, participate in a symposium at the Law School, absolutely wow the SRO audience as well as the other Chief Justices on the panel, answer a slew of questions from students and faculty, and then immediately rush to the airport for a flight back home to make a family celebration which obviously could not be the same without her. And all with that New York City-born spunk and confidence and delight of hers. She's amazing!]

Shirley Abrahamson is Wisconsin's first woman Justice and, in a few years, with 37+ years on the state's high court, she will become the longest serving Justice in Wisconsin history as well.

What about some other women Chief Justices in America? There are some pretty extraordinary ones. What about a group of 9? Kind of a dream team Supreme Court. And indeed, if our Presidents were wise enough, they would have appointed some from this list to the nation's highest court. Here are my 9. [The order is simply alphabetical.]

Judith S. Kaye, Chief Judge of New York (Retired 2008). Appointed to the New York Court of Appeals, the state's highest court, in 1983 and elevated to Chief in 1993. She was the court's first woman and its longest serving Chief Judge.
[I'm including her because she would not be retired except for New York's moronic law that requires its high court judges to retire at the age of 70, just when many of them are at their prime in deciding the kind of fundamental questions that appeals courts of last resort must resolve. Just think, Shirley Abrahamson would have been forced to retire 5 years ago! Idiotic or what?] (More about her at: http://www.nycourts.gov/courts/appeals/jkaye.htm) 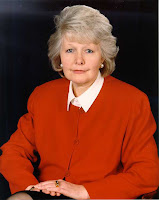 Margaret H. Marshall, Chief Justice of Massachusetts. She was appointed to the Supreme Judicial Court in 1996 and to the position of Chief Justice 3 years later.
(More about her at:
http://www.mass.gov/courts/sjc/justices/marshall.html) 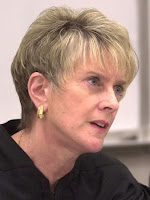 Ruth V. McGregor, Chief Justice of Arizona. She was appointed to the state's Supreme Court in 1998 and has served as its Chief since 2005.

Mary Mullarkey, Chief Justice of Colorado. She has been on the state's Supreme Court since 1987 and been its Chief since 1998.

Leah Ward Sears, Chief Justice of Georgia. She is the first woman and youngest person ever to sit on the state's Supreme Court. She has served on the court since 1992, becoming the first African-American to serve as Chief in 2005.

Marsha K. Ternus, Chief Justice of Iowa. She has sat on the state's Supreme Court since 1993, and became its first woman Chief Justice in 2006. 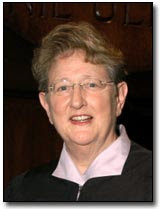 Jean Hoefer Toal, Chief Justice of South Carolina. She has served on the state's highest court since 1988, and as its Chief since 2000.


So there you have 9 extraordinary women. Each is the Chief Justice of her state, presiding over her state's highest court and overseeing its judicial branch. And each is among America's very finest judges.

Let me put it bluntly. If these were the 9 Justices on the U.S. Supreme Court, we'd have a much better court.

That is not to say that each Justice currently on the nation's highest court suffers badly in comparison to each of the women Chief Justices on my list. By way of example, if Justice Ruth Bader Ginsburg were a state Chief Justice, she surely would be included in my list. But collectively, this group of women Chief Justices would, in my view, constitute a stronger, wiser, more just, and more sensible court of 9 than we now have.

But, of course, their states and their state high courts are so much the better because these extraordinary women have served where they have. So CONGRATULATIONS to Chief Justice Shirley Abrahamson, and lots of admiration and gratitude to her and the other Chiefs.

[One last note. The Chief Justices that I've identified are those who I know personally or by reputation to be extraordinary. There certainly are other women Justices and Chief Justices on our states' high courts who belong on any enumeration of America's outstanding judges. Nothing should be inferred from their absence on my list. On the other hand, go ahead and infer plenty from those who are included!]