Judicial Pay in New York: The Court's Decision, the Chief Judge, and a Commentator (Part 1)

For this post and the next, 3 items related to judicial salaries in New York. The issue has been the source of considerable debate and increasing consternation. First, a recap of the Court of Appeals' recent decision on pay raises for the state's judges. Then, Chief Judge Lippman's public statement applauding the decision and underscoring his determination to insure that the legislature complies. Finally, in the next post (i.e., Part 2) the commentary of Michael Friedman, a prominent matrimonial lawyer in the Albany, New York area, arguing against increased compensation and other expenditures requested in the judiciary's proposed 2010 budget.

The Court of Appeals' Decision 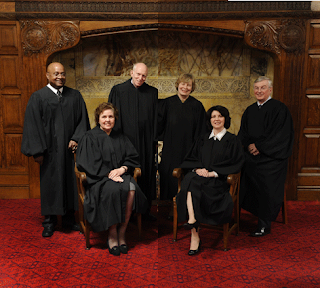 [Through the magic of on-line photo copying and pasting, with a little editing--none of which I understand--I was able to "borrow" the photo from the Court of Appeals website and delete the Chief Judge's image. He recused himself from the case. (He was formally a party inasmuch as one of the lawsuits involved was brought by former Chief Judge Kaye in her official capacity.) The 6 remaining Judges in the photo participated in the Court's decision.]
At the end of last month, New York's highest court ruled on the "current judicial pay crisis" in the state. In an opinion by Judge Eugene Pigott (appointed by Republican Governor Pataki), the Court ordered the state's legislative and executive branches to consider judicial compensation on its own merits. According to the Court, the independence of the state judiciary has been jeopardized--and, thus, the constitutional separation of powers has been violated--by the failure of the other 2 branches of state government to give fair consideration to the salaries of the state's judges. (Maron v. Silver, Feb. 23, 2010.)

As the Court noted, both the legislature and the Governor actually agree that judicial salaries should be raised. Indeed, both have proposed raises. The state's judges have not received a pay raise in over 11 years--the longest dry spell for judges of any state. As a result, the real value of salaries for New York's judges ranks near the very bottom of judicial salaries across the country. A recent independent study of the National Center for State Courts ranks New York 48th out of 50.

In other words, consideration of judicial compensation by the legislature and Governor must be separate and independent of the consideration of other political or policy initiatives--whether that be legislators' salaries, funding for state parks, or dredging the Hudson.

Notably, the Court made clear that it was not mandating that judicial salaries be raised. That decision was left up to the legislature and the Governor. The Court was simply mandating that those branches do consider the issue objectively and on its own, uncluttered merits.

At the same time [You know something to the contrary is coming!], at the very end of its decision the Court made another thing "pellucidly clear." In no uncertain terms, the Court affirmed its role and authority to determine whether the obligation just imposed, to fairly consider judicial salaries, is henceforth satisfied. It then closed with: "We therefore expect appropriate and expeditious legislative consideration." [My emphasis.]

[There are other fascinating aspects to the Court's decision. E.g., the fact that the Judges themselves have a vested interest in their decision on judicial salaries, and the brief but pointed dissent of Judge Robert Smith that the situation is hardly "disastrous" even if the legislature is acting "irresponsibly."] 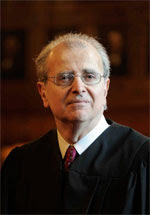 When the decision rendered by his colleagues was released, Chief Judge Lippman called it "groundbreaking" and made clear his expectation that the legislature comply. A few weeks earlier, in a public response to the Governor's criticism of the judiciary's (i.e., Lippman's) proposed budget, the Chief Judge referred to the 11 year inaction on judicial salaries as a "travesty." [That January 19th statement can be found at http://www.nylj.com/nylawyer/adgifs/decisions/012010statement.pdf.]

Here, in full, is the February 23d statement released publicly by his office in reaction to the Court's decision:

"Chief Judge Jonathan Lippman delivered the following message to the
Judges of the New York State Unified Court System via a web cast today at 1:00
p.m.


'The judicial compensation decision handed down by the New York Court
of Appeals today represents a groundbreaking legal precedent. This is the first
decision by a state court of last resort to find a violation of the separation of
powers doctrine based on a legislature’s failure to address, on the merits, the issue
of judicial compensation. Today’s decision vindicates our longstanding position
that the judiciary is an independent, co-equal branch of government, and must be
treated as such.
In essence, the decision says that the legislature, in its present and future
deliberations, must consider the judicial salary issue independently of any
unrelated issues.
I would make clear that while the decision has great force, it does not set a
precise time frame for the legislature to act, and leaves to the legislature the
ultimate decision of whether and to what extent it must increase judicial salaries.
But make no mistake, the legislature is now obligated under the court’s declaration
to consider judicial salaries on the merits. The court also makes clear – and this is
critically important – that whether the Legislature has met its constitutional
obligations in this regard is subject to the continued scrutiny of the court, and that
the court “expect[s] appropriate and expeditious legislative consideration.” The
legislature must now remedy the constitutional violation, and we expect them to do
so in good faith and expeditiously.
I am calling upon the other branches, publicly and privately, to comply with
the court’s decision and honor their constitutional obligations and the respective
functions of the different branches of government. The court has shown sensitivity
and respect for the very different roles of all three branches of government, and the
legislature must do likewise. We are cognizant of the state’s fiscal situation, but
that does not detract one iota from the fact that judges have not received so much
as a single cost of living adjustment in more than 11 years.
If the other branches do not proceed in accordance with the court’s decision,
I will not hesitate to act in a manner consistent with the constitutional duties and
obligations imposed upon me as the head of an independent branch of government.
How exactly all of this develops remains to be seen. I would be less than
forthright if I said to you that this decision represents all that we hoped for in terms
of an immediate remedy. But our resolve is strengthened by the court’s
declaration. Our cause has been upheld, and the independence of the judiciary has
been resoundingly affirmed on the issue of judicial compensation.
The result we have achieved today would never have been possible without
the support and perseverance that you have shown during so many years of unfair
and frustrating treatment. Your hard work and professionalism are the keystones
of the judiciary. We above all remain faithful to our constitutional oaths while
committing ourselves to seeing this journey through to finality. I also want to
express our great appreciation to all the lawyers who labored tirelessly on our
behalf.
After all that we have been through, we have every right to have our spirits
lifted by this landmark decision of the highest court of our state. There is clearly
still much work ahead, but today we have taken a significant and meaningful step
forward toward just and equitable compensation for the judiciary.'

"After his remarks, Chief Judge Lippman added that he had recused himself
from consideration of any of the issues in the judicial compensation lawsuits
because he is the plaintiff in one of the three lawsuits. The remaining judges of the
Court of Appeals decided the cases pursuant to the Rule of Necessity, a legal
doctrine dating back to the 15th century which provides that where no other judge
can be found who is impartial with regard to a particular case, then the court
assigned to the case is compelled to hear it. This doctrine has previously been
invoked by the federal courts and other state courts in judicial compensation cases.


"New York State judges have not received a cost of living increase since
January 1, 1999. They have received only one pay adjustment in the last 15 years,
and only two adjustments in the past 22 years. Of the 50 states, New York has
gone the longest without a judicial pay increase. New York ranks last nationally
when judicial pay is adjusted for statewide cost of living."

Tomorrow, in Part 2, a very different perspective in the commentary of Michael Friedman.