In preparation for what's to come--the cases, issues, arguments, votes, decisions, Justice Kagan replacing Justice Stevens, etc.--let's take a look at the last completed term. The one that ended just before the summer break. The 2009-10 or October '09 Term.
The Court decide 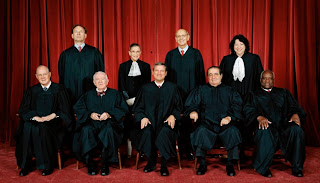 d 72 cases after full argument, and a total of 86 including those treated more summarily. Reviewing this entire decisional output, I arrived at 10 highlights. (I was not looking for a Top Ten; it just turned out that way.)
These were politically or ideologically charged cases. Particularly so. That is, they involved matters of considerable interest to the public. Matters of considerable controversy among the body politic. Church and state. Gun control. The war on terror. Corruption. Cameras in the courtroom. Sentencing juveniles. Miranda rights.

These cases raised vital legal and Constitutional issues. About the role and authority of government. The rights and liberties of individuals. The process and modes of judicial decision-making. And intimately tied to that, the meaning and application of the Constitution.

There were certainly more than 10 important decisions last term. But as I reviewed the term over and over, it was these 10 that kept striking me as the most salient.

For this post, let's just start with the case names, the general matter involved, the very bottom line of the Court's ruling, and the raw vote. In forthcoming posts, we'll take a closer look at the cases, the Court's decisions, the Justices' voting and opinions, and the decisional and voting patterns that emerge.

So here goes. A quick look at the (turns-out-to-be-Top-Ten) highlights of the Supreme Court's last term. For now, we'll list them in chronological order:

3) Padilla v. Kentucky
---Involved an attorney erroneously telling his client that pleading guilty would not affect his immigration status.
---Court's ruling: the client's right to effective counsel was violated.
---Vote: 5-4 [an attorney must correctly advise a client of the consequences]; 6-3 [an attorney can't actively mislead the client].

8) Skilling v. U.S.
---Involved the federal law criminalizing the fraudulent theft of the "intangible right" of "honest services."
---Court's ruling: the law is not too vague if limited to bribes and kickbacks.
---Vote: 6-3.

10) Christian Legal Society v. Martinez
---Involved a student religious group that excludes gays and lesbians in violation of the state university's non-discrimination policy.
---Court's ruling: the university's refusal to recognize and subsidize the group does not violate freedom of religion or speech.
---Vote: 5-4.

OK, there they are. Eight of these decisions were 5-4. (One of those [Graham] was 5-4 on the general issue, even though 6-3 on the specific facts of the case.) In every one of those it was Justice Anthony Kennedy--the "swing vote" year after year--that made the difference. Voting with the conservative bloc of Justices in some cases, and with the liberals in others.

Two of the 10 decisions were 6-3. In those, the swing voting was still between the conservative and liberal blocs. But the Justices who switched sides were not the same.

We'll take a closer look at these votes and the decisions in coming posts. We'll also be examining some patterns. And yes, we'll have graphs to help visualize it all.