Supreme Court: Highlights...(Disclosure--How I Would Have Voted in the Free Speech Values Cases)

Justice William O. Douglas proposed that authors of law review articles and, by extension, other legal analysis and commentary, ought to disclose their predilections. In this way, the reader has a better idea of the possible biases affecting what the author has written. (See William O. Douglas, Law Reviews and Full Disclosure, 40 Wash. L. Rev. 227 [1965].)

I have done so from time to time, in law review articles, live presentations, and in posts here on New York Court Watcher. Particularly when I had strong views about an issue about which I was writing. In the very last post, for example, I made clear my own view about the Court's unsigned majority opinion explaining its decision to stop any televising of the same-sex marriage trial. My strong view is that the majority's explanation was utterly unpersuasive and, perhaps, pretextual.
In any event, I thought it might be a good idea at this point (for any reader who might care) to tell how I would have voted in the 4 "Highlights" cases dealing with free speech and related values. They are extremely important cases. They involve some of the most critical values for a free society. The competing interests at stake in these cases evoke especially intense feelings on both sides. And very likely, on the part of anyone writing about them.

So here goes. Hopefully, without taking myself too seriously. 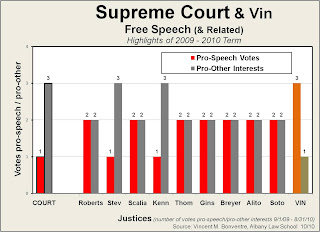 I must admit, however, that on 1 of the cases, my hypothetical vote has changed a few times. In fact, it just changed again after discussing it with my wife. I will get to that case, but let's look at the cases in the order in which we looked at them in the earlier posts in this series. 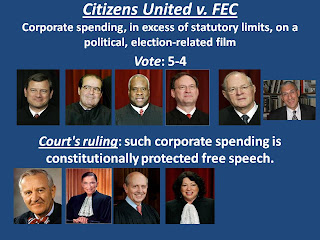 Campaign finance reform is fine in the abstract. But it should not be promoted at the expense of the expression of political opinion. Remember, this case involved paying for a film criticizing then-Senator Hillary Clinton. Can't get more core 1st Amendment free speech than that!

Moreover, any limitation on expressive political activity ought to be as minimal and surgical as possible. That can hardly be said for the numerous restrictions in the campaign finance law which the majority found constitutionally problematic in this case. 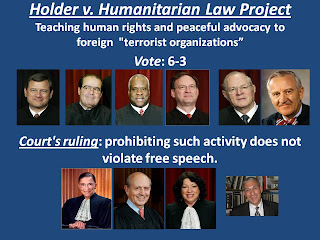 Humanitarian Law Project is the case with which I've had the most difficult time choosing sides. Ultimately, though, what cannot be avoided is the fact that this case involves pure speech. Speech of the type that is at the core of 1st Amendment protection. Speech about human rights. And the speech in this case did not involve any exhorting, triggering, favoring, or approving any illegal or otherwise dangerous actions.

So I would have sided with the 3 liberal Justices in dissent. Yes, the government--and particularly the federal executive branch--must be given a great deal of deference in foreign policy and defense, including the adoption and enforcement of anti-terrorism measures. But, that ought not to be a free pass to the government to prohibit pure speech about humanitarian ideals. At least not when the government can offer absolutely nothing to justify its prohibition on such speech, except to wave the "war on terrorism" flag and to argue generally that the Court should defer to the government's judgments.

Yes the "war on terrorism" and yes general deference to the government's judgments in this area. But something more specific and more explanatory than that when core political free speech is at stake.

And yet, I admit that this is a tough one for me. But some of the most egregious abuses in our history have resulted when the government has been given carte blanche in foreign policy and war. I err on the side of free speech in this one. 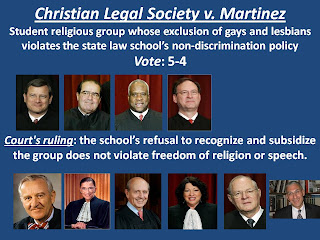 For me, this was an easier case. In Christian Legal Society, the student religious group was not prohibited from speaking or in any other ways expressing its views against homosexuality. It was not ordered to disband. The state law school, under its anti-discrimination policy, merely refused to recognize the group as an official school organization and refused to provide it funding.

In the Bob Jones University case in 1983, the Court--in an opinion by Nixon-appointee Chief Justice Burger (No liberal he.)--denied tax benefits to the religious school because of its discriminatory treatment of Black students. The eradication of racial discrimination, the Court held, was an overriding American goal. That justified denying government benefits to the school, even though its practices were based upon religious beliefs.

I wholeheartedly and enthusiastically agreed with the Court in Bob Jones University. For like reason, I wholeheartedly and enthusiastically agree with the Court's decision in Christian Legal Society. So, I would have voted with the 4 liberal Justices + Kennedy. (One additional point. The conservative Justices have never evinced any particular support for the equal rights for gays and lesbians. Consequently, their votes in support of the group that excluded gays and lesbians from membership was entirely to be expected.) 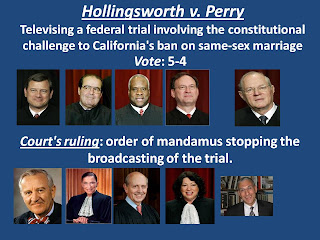 I would have voted with the 4 liberal Justices in Hollingsworth to allow the video broadcast of the same-sex marriage trial. This is the 1 case out of the 4 that I believe the Court majority was clearly wrong. I disagree with the Court's decision in Humanitarian Law Project, but I think that case was very close. This case doesn't seem close at all.

On the one side was a societally important trial to be made open to accommodate a very interested press and public which otherwise would be unable to view it. Also on that side was the considered judgment of the trial judge and the federal appeals court, both of which believed it a good idea to broadcast the trial, and neither of which believed there was a downside. Additionally, there is the rare use of the writ of mandamus by the Supreme Court--only in drastic cases, when irreparable harm is probable, and virtually never, if ever at all, used to interfere with administrative procedures in the lower courts.

On the other side was a swifter than usual changing of an administrative rule in order to allow the broadcast. There was the risk that some witnesses might be harassed. And there was... who knows what. Nothing in the majority's unsigned opinion demonstrated anything compelling or any necessity at all for turning off the television cameras in the trial courtroom.

Well, I think so. And I think that the opponents of same-sex marriage on the Supreme Court are hesitant to see the legal arguments against same-sex marriage exposed to a wide audience for how flimsy they really are.

The only real question for me is the vote of Justice Kennedy with the majority. He has been a strong supporter of equal rights for gays and lesbians. I suspect that his vote has much more to do with insider insights he may have as to the internal administrative procedures of the lower courts involved in the case. As a former judge on the 9th Circuit--the federal judicial circuit that approved the broadcast of the trial--he may have some specific concerns having nothing to do with same-sex marriage.

Anyway, that's my take on these cases. In short, I would have voted in favor of corporate political activity (Citizens United); in favor--after much deliberation--of the humanitarian group teaching international human rights to designated terrorist organizations (Humanitarian Law Project); in favor of the state law's school's anti-discrimination policy against the student religious group that excluded gays and lesbians (Christian Legal Society); and in favor of video broadcasting the same-sex marriage trial (Hollingsworth). That's 3 votes for free speech and related values, and 1 vote for a competing interest.

In the next post in this series we'll get to the "Highlights" cases dealing with religion and the law.