Like painted kites,
Those days and nights,
They went flyin' by.
--Sinatra, SUMMER WIND

Yes they did. For six and a half magnificent weeks. July 22 thru September 5. Like Joe D. at the plate--or in the field. Like Mantle hitting the upper deck. Like Ali dancing and stinging. Like Frank Lady-is-a-Tramp'ing with Ella. Like Nonna's eggplant parm. A thing of the Creator's beauty.

It's been several weeks since closing day. I'm finally emerging from the Post-Saratoga Blues. An Upstate malady. But with the Breeders' Cup a week away, this ain't a bad time to recall the Saratoga meet to get psychologically prepared for the championships.

This year, the Highlights are enhanced by the gorgeous shots taken and supplied by Bob Mayberger--a great lawyer, a great Clerk of the Court of the Appellate Division, Third Department, a great guy, and a great photographer. So let's go.

Right at the outset, highlight #1 for me, Havre de Grace in the Woodward.
click to enlarge any photo
(All by Bob Mayberger, unless noted.) 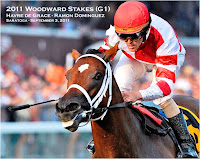 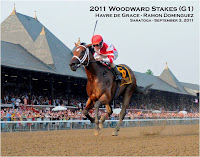 Grace, the 4 year old filly, beat the boys in the 1and 1/8 mile race on Labor Day--i.e., closing--weekend. Among the boys was Suburban winner and Whitney runner-up, Flat Out (who subsequently won the Jockey Club Gold Cup); multiple stakes winner last year and the Birdstone at Saratoga in August, Rule; last year's Florida Derby winner and runner-up in the Run for the Roses, Ice Box; this year's winner of the New Orleans Handicap and Stephen Foster runner-up, Mission Impazable; this year's Donn Handicap winner, Giant Oak; and winner of 2 in a row at Calder, Mambo Meister. Not a bad group.
[Oops! I realized that I had conflated the Woodward and the Travers when I first wrote this paragraph. What you just read is the revised--i.e., ah, corrected--version.]

Grace paced herself in 4th, then in the stretch she went head to head with Rule, left him behind, then finished 1 and 1/2 lengths ahead of Flat Out. It was a wonderful, exhilirating edition of the best race at Saratoga, or anywhere else, year in and year out. Well, in my view it is. For example, in just the last few years....


There was one of the most exciting and emotional events in recent sports history. Yep, that's when that 3 year old diva, Rachel Alexandra, took on the older boys in the 2009 Woodward. She went on to win Horse of the Year. Extraordinary, extraordinary, extraordinary race! Ask anyone who was there. (See Courts, Judges, Cases--But First: Saratoga Highlights!!!, Sept. 12, 2009.)
remember: click to enlarge any photo
(Again, all by Bob Mayberger, unless noted.) 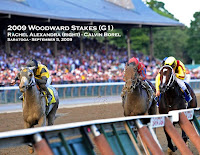 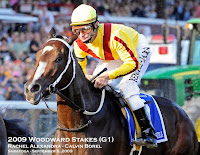 Two years before, it was 4 year old Lawyer Ron. He had just set the Saratoga record for the distance in the Whitney a few weeks earlier, and he returned in the Woodward to win in the same style. Just off the pace, and then blew away--and I mean blew away--the rest of the field down the stretch. That's why you won't see any other horses in these shots. I just loved that little guy, and Cath and I were screaming like lunatics at the rail as he ran by! 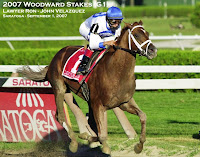 In the intervening 2008 Woodward, it was the reigning Horse of the Year, Curlin, who closed on Wanderin Boy and beat Past The Point in the stretch. The magnificent champ, Curlin, was well on his way to become the richest racehorse in North American history, and the Horse of the Year for the 2d time in a row. 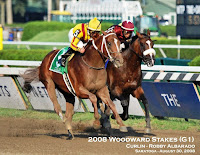 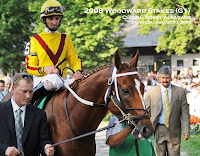 Yes, my favorite race. Other winners of the recent past include Quality Road, Ghostzapper, Mineshaft, Lemon Drop Kid, Cigar (twice, at 5 & 6), and Holy Bull. Before that there was Alysheba, Slew O' Gold, Affirmed, Spectacular Bid, Seattle Slew, and of course Forego (four times at 4, 5, 6 & 7!!!). Wish I was there for those.

Before the weekend is up, I'll have the rest of Saratoga Highlights [A Top Ten with more than 10!] in part 2, and maybe 3.