Criminal Decisions Up at the New York Court

Numbers Nearly Double with Lippman
The Court of Appeals has been deciding around 90 criminal appeals each year with Jonathan Lippman as Chief Judge. 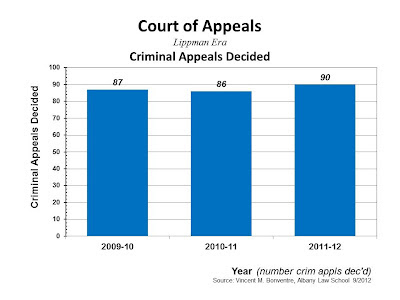 That number is particularly significant when compared to the number of criminal rulings in the years immediately preceding Lippman's appointment. The contrast between the first full 3 years under Lippman and the last full 3 years under Chief Judge Judith Kaye is striking. Take a look. 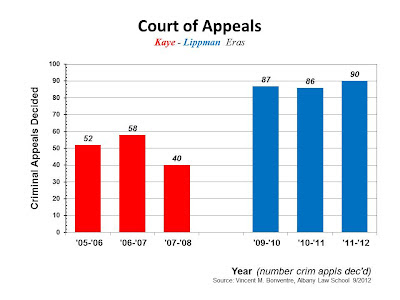 Nor is the contrast a mere happenstance. It reflects more than a coincidental decrease in the number of criminal decisions in those last 3 Kaye years. Take a look at 10 years earlier. Look at the numbers for the 3-year period of the Kaye court at that time. 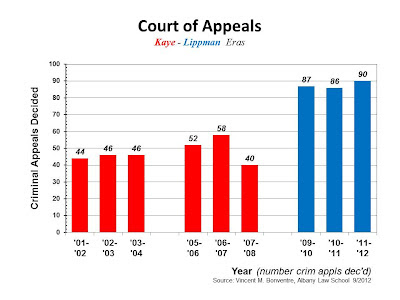 As shown in Graph 3, the number of criminal appeals decided by the Kaye court in the 3 full years, fall 2001 through spring 2004, was actually a bit lower than in the last 3 years of the court under Kaye. The obvious point being that the contrast between the Lippman and Kaye courts in the number of criminal decisions is real. It's not the result of an aberrationally low year or two in the Kaye era.

Just as intriguing is the the number of criminal decisions by the Court in the earliest years of Kaye's tenure as Chief Judge. The Court at that time (Kaye was elevated to Chief Judge in March 1993) was deciding more than twice as many criminal appeals as it would later in the Kaye era. Once that number dropped--and dramatically so--it would rise again only after Lippman became Chief.
Take a look. 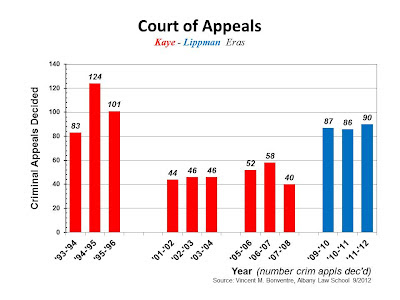 Nor was the higher number of criminal decisions early in the Kaye era a change from the Court's practice at the time. Rather, the Court had been deciding that comparatively higher number of criminal appeals in the preceding years under Chief Judge Wachtler (fall 1990 through spring 1992). It did so, as well, in the Wachtler-to-Kaye transition year (fall 1992 - spring 1993). Take a look. 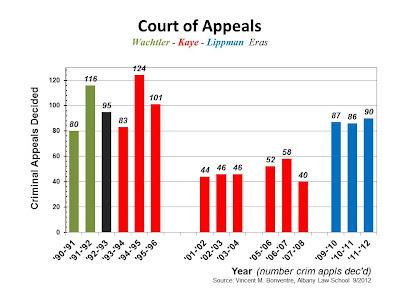 Let's collate and simplify the previous few graphs. Depicting the foregoing data with averages for the respective 3-year periods will underscore the changes over time. The late Wachtler years, to the early Kaye years, through the middle and late Kaye years, to the current Lippman era. Here it is, in averages. 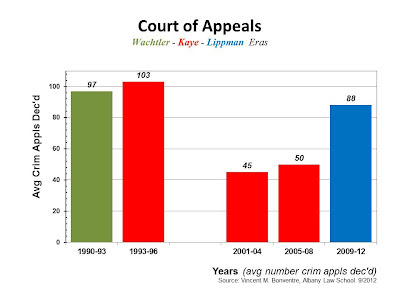 The changes--the up and down and up again--could hardly be clearer!

Lastly, here's a graph depicting every year from the latter part of the Wachtler court, through Kaye's tenure, to the first few years of the Lippman court. All 22 years. 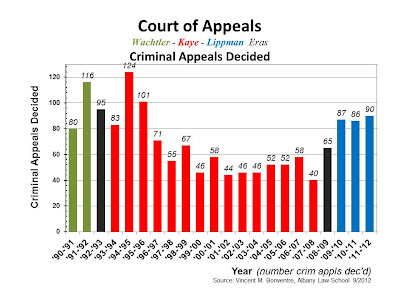 Nearly 3 years ago, in a series of posts on New York Court Watcher, we examined the reduced number of criminal appeals being granted (CLA's) by the Court of Appeals. We noted that there had been much grumbling in the bench and bar about the apparent decrease. Indeed, our research showed that the number of CLA's granted had dropped significantly over the years. Almost in half.
The New York Law Journal, in an article by Joel Stashenko, highlighted the concern about the greatly diminished number of criminal cases accepted by the Court. It also quoted the then-new Chief Judge Lippman expressing similar concern and an intention to address it. [See Joel Stashenko, "Chief Judge to Review Why Court Accepts Few Criminal Appeals," NYLJ, April 22, 2009. Note: I was a source--on the record--for that article.]
The New York Court Watcher series also showed that CLA grants did rise almost immediately thereafter.
As shown in this post, that increase in CLA grants has ultimately resulted in a corresponding increase in the number of criminal appeals decided by the Court.
[For those earlier posts on the drop in CLA grants during the Kaye era, the increase early in the Lippman era, and how often each of the Judges were granting CLA's, see NY Court of Appeals: Granting Criminal Appeals--Up, Down, Now Up Again? (Part 1: Overview), Oct. 27, 2009, through NY Court of Appeals: Granting Criminal Appeals--Up, Down, Now Up Again? (Part 10: Who's Granting Now?), Jan. 26, 2010.]