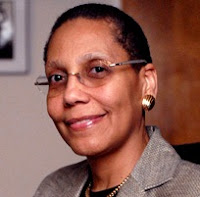 It's hard to find anyone who seriously questions the qualifications of Justice Sheila Abdus-Salaam to sit on New York's highest court.

In fact, it seems that everyone is speaking highly of her. And that's not just publicly--which there's often good reason to distrust. But off-the-record and privately. By all accounts that have come to my attention, she is well-respected and well-liked and a fine choice for the Court of Appeals.

There is certainly none of the controversy and none of the doubts that attended the nomination of Governor Cuomo's first Court appointee, now-Judge Jenny Rivera. That does not mean that Rivera was a poor choice or won't turn out to be a very fine Court of Appeals Judge. It only means that Abdus-Salaam's record is much more traditional for a Court nominee.

Yes, a record of public service. And one that includes a track record as an appellate judge. A track record highlighted by judicial opinions available for all to read, examine, and critique. Check this out: 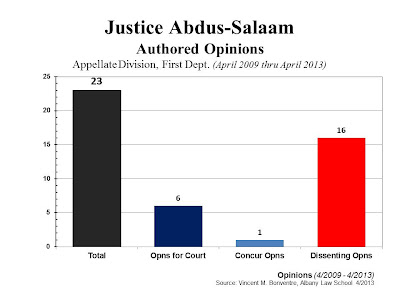 So, 23 authored opinions. [Well, probably a lot more than that. She likely wrote many more shorter, less significant, unsigned memorandum decisions. But there are 23 opinions that we know she wrote.] Opinions which she personally signed. Hence, a body of judicial work that undoubtedly offers clues about what to expect from Abdus-Salaam as a Court of Appeals Judge.


And let's not forget her non-judicial government service. In fact, she has considerable legal experience in government.

3 years as a staff attorney for East Brooklyn Legal Services. 8 years as an Assistant Attorney General for the State. 3 years as the General Counsel in the New York City Office of Labor Services. So Abdus-Salaam has no dearth of substantive, litigating and counseling work in her background.

Then came the judicial experience. 17 years as a trial judge and, to date, 4 on the Appellate Division, First Department (New York's intermediate appeals court that sits in Manhattan).

Now I don't think judicial experience is necessary to be a fine high court judge. Not at all. Many of the greatest ones in history had none. (See e.g., Supreme Court: Kagan Nomination--the "No Judicial Experience" Bugaboo, June 2, 2010.)

Yes, the tough stuff. The vexing, controversial, delicate balancing of competing, even conflicting and irreconcilable interests that are the work of judges and justices on high courts. Courts like the U.S. Supreme Court and the New York Court of Appeals. Judicial experience--and the record emerging from that experience--are certainly indications of preparedness for such labors.

Beyond that, judicial experience provides a record. A record of decisions. Of judgement exercised. Of  opinions authored. Of explanations offered. Of choices made. And yes, as we've already noted, Justice Abdus-Salaam has a record.

From as best as I can determine, her record includes:


Let's look at some of this, and more, in graphs.
(GRAPH 2--click to enlarge) 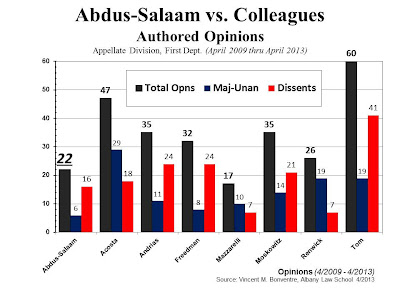 As shown in Graph 2, Justice Abdus-Salaam has not been one of the more prolific members of her court. Since she was appointed to that court in April of 2009, she has actually authored fewer (signed) opinions than most of the several other Justices whose records I randomly surveyed.

Interestingly, compared to the 2 other members of her court who were on the last 2 Nominating Commission's lists with her, she has written the fewest opinions. Justice Roland Acosta wrote more than twice as many as Abdus-Salaam during the very same 4 years. Justice Dianne Renwick, a few more. 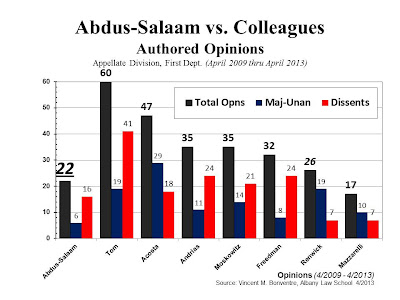 Apparently, several of Abdus-Salaam's colleagues write many more opinions than she does. In fact, only 1 member of  her court that I surveyed has written less. Hmmm.

Not sure what that means. I would need more time to research and more space than this one post to try to get to the bottom of it. [Maybe the Senate Judiciary Committee will explore this with her.]

What about focusing on majority and unanimous opinions--i.e., opinions she wrote for the court? Maybe some of her more prolific colleagues write no more of these than she does, but only lots of dissents, which would account for their (much) higher numbers. Let's look.
(GRAPH 4--click to enlarge) 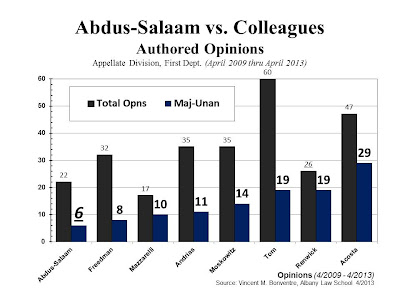 Justice Abdus-Salaam actually wrote fewer opinions for her court--unanimous or majority--than any other member of the court (again, that I randomly surveyed). Interestingly, the 2 others whose names appeared on the last 2 nomination lists authored the most opinions for that court. Acosta  the most with 29; Renwick with 19. Both with many more than Abdus-Salaam.

This is most curious.

OK, what about the number of dissenting opinions. Maybe Abdus-Salaam  is simply the great, frequent dissenter. [Disclosure: I clerked for 2 Court of Appeals Judges who often dissented, and loved another one who dissented even more regularly. I believe that all 3 of them were usually right. Indeed, many of Judge Matthew Jasen's dissents were ultimately vindicated by later decisions of the Supreme Court or the Court of Appeals.] Let's look at how Abdus-Salaam's record of dissents compares with that of her colleagues.
(GRAPH 5--click to enlarge) 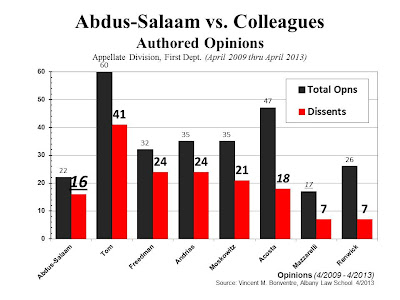 Finally, as far as graphs are concerned, what about her vindication by the Court of Appeals. That is, how many times did New York's high court agree with her when she wrote an opinion--majority or dissent--when her court was split. 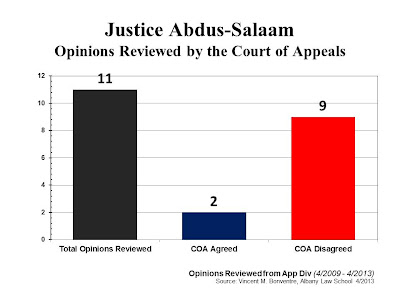 Now let's be clear. This does not mean that she got it wrong. Or that the Court of Appeals got it right. As every law student knows--or should--Holmes, Brandeis, and Cardozo often could not get the votes, but they were right and history proved them to be so.  [As for the Court of Appeals itself, I must repeat, with the pride of a former law clerk, that Judge Jasen's dissents were often ultimately vindicated, and, as for the other Judge I clerked for, Stewart Hancock, some of his dissents appear in casebooks as the obviously better reasoned opinions.]

So, there is no reason to think that Justice Abdus-Salaam was necessarily wrong. Regardless of how frequently she lost at her own court or at the Court of Appeals. [Disclosure, my own view is that she was right in most of those cases, and that she had a better argument than her court and the Court of Appeals.]

But this is nonetheless a matter of concern that, hopefully, she'll be questioned about by the Judiciary Committee.

Finally, what side is she taking in these opinions?  Here are a few of the most revealing:
To conclude this post, here are a few observations drawn from the foregoing.

Justice Abdus-Salaam does not write an abundance of opinions. When she does write, however, they seem to fall into some discernible patterns:
The Senate Judiciary Committee holds its hearing on Justice Abdul-Salaam's nomination tomorrow, Tuesday April 30, 2013. Confirmation does not seem in doubt.

Nevertheless, it is certainly hoped that the Committee will perform its constitutional "advice and consent" duty and do so vigorously. The committee did so last month with then-nominee Jenny Rivera. It should do no less with Sheila Abdus-Salaam.

The Senators should satisfy themselves that she is fit to sit on the Court of Appeals. Indeed, that she is exquisitely fit. Nothing less is sufficient for an appointment to New York State's high court.

There is surely much grist in Abdus-Salaam's record for a thorough vetting by the Senate. The committee must satisfy itself, and not simply rely on assurances by the Governor or anyone else (including me).

Hopefully, the Senate Judiciary Committee under its Chair, Senator John Bonacic, set a precedent in its last hearing that it will continue to follow.