Gay Marriage at the Court

It's condemned in the Bible.
It's immoral.
It's an unnatural perversion.
It's a psychological malady.
It's a threat to traditional marriage.
It's bad for the children.
There's no right to homosexual sodomy mentioned or implied in the Constitution.
The government should not approve the homosexual lifestyle.
There's no discrimination against gays and lesbians, because they can marry members of the opposite sex just like everyone else. 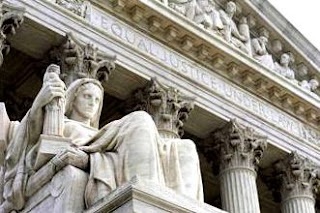 None of this nonsense was argued before the Supreme Court.

No. Such nonsense--frequently mouthed on talk radio, on a certain news network by favored commentators, at right-wing political gatherings, by hate groups, and by others who should know better--was absent at the Court. There was none of that when the Court heard oral arguments in the same-sex marriage cases in March.

[Videos of the interviews with me on the same-sex marriage cases on Liz Benjamin's Capital Tonight are accessible at the end of this post.]


We are talking about Constitutional Law and the Supreme Court. Not about baseless chatter, anger, or crass political pandering. Not about spewing such nonsense to hateful or frightened audiences, or to those who are callous or clueless about constitutional principles of basic fairness, equal treatment, and fundamental rights.

And yes, the advocates arguing those positions at the Court were brilliant, sophisticated, respected lawyers. Not antediluvian dimwits, fanatical fundamentalists, or partisan hacks.

Consequently, their arguments bore little resemblance to that baseless, hateful, angry nonsense that fills the airwaves and much of the public discourse about gays, lesbians, and same-sex marriage. Rather, they raised important questions about democratic governance, about federalism, and about the judicial role.

Regarding both Prop 8 and DOMA, it was argued that these were choices of democratic governance--i.e., respectively, by the voters of California and by the people's representatives in Congress as well as their elected President.

Regarding California's limitation of marriage to opposite-sex couples, it was argued that the voter approved initiative is true to the underlying historical purpose of marriage. That purpose is to provide and encourage a stable unit of the biological parents for the protection of their children. This vital societal interest in "responsible procreation" justifies Prop 8 because only opposite-sex couples can procreate.

At the least, the argument goes, Prop 8's limitation of marriage to opposite-sex couples is a reasonable, if not perfect, means to protect the children who are born to them. And such laws need only be reasonable, not perfect, to be constitutionally valid.

Prop 8, it was also argued, reflects the strong interest of California to proceed cautiously with marriage. To stick with traditional marriage while society's notions of marriage are evolving.

Regarding DOMA, it was argued that the law preserves the federal government's similar interest in proceeding cautiously with marriage. Again, to stick with traditional marriage while society's notions of marriage are evolving.

DOMA, it was also argued, insures uniform federal treatment of marriage. The law provides benefits across the nation to traditional married couples only, regardless of the redefinition of marriage in a few states.

Additionally, DOMA, like the laws in most states that provide only for traditional marriage, serves the underlying historical purpose of marriage. Again, that purpose is to provide and encourage a stable unit of the biological parents for their offspring.

Moreover, it was argued, these are certainly rational, if not perfect, justifications for DOMA's recognition of opposite-sex marriages only. And DOMA is unlike laws that discriminate on the basis of race; those laws can only be valid if they are actually necessary for the most compelling reasons. By contrast, DOMA is like most other laws. Although it does treat traditional and gay marriages differently, it need only be rational--not necessary or compelling--to be constitutionally valid. And it is at least that.

There were arguments regarding the judicial role--and specifically, the role of the Supreme Court itself.

The Court, it was argued, ought to proceed extremely cautiously. It should be very hesitant to impose a significant societal transformation upon the nation. To require all the states to permit same-sex marriages would be to mandate drastic cultural change, would create considerable societal upheaval, and would substitute judicial fiat for choices made by the people.

Along the same lines, the argument goes, the federal judiciary--and, again, specifically the Supreme Court--is the unelected, unaccountable branch of government. In a democratic society, that branch should defer to the democratically elected branches of government. That is, defer to the Congress and the President who, respectively, pass and sign the laws.

Similarly, the unelected and unaccountable Court should defer to the democratically enacted laws of the states. A fortiori, because those governments are closer to the people and, thus, even more democratic.

Accordingly, the argument concludes, consistent with democratic governance, the Court should uphold a duly enacted law, federal or state, unless it is very clearly unconstitutional. And neither Prop 8 nor DOMA, which simply maintain government approval of traditionally defined marriage, can be said to very clearly violate the Constitution.

Now, one need not agree with those arguments or be persuaded by them. But it would be difficult, honestly and objectively, to say that those arguments are wholly without merit. Indeed, some of them are quite pressing. Certainly, the role of the federal Supreme Court vis-a-vis the elected branches of government and the states is, if anything, a pretty fundamental precept of our constitutional system of government.

Likewise, it would be hard, honestly and objectively, to deny that the Court ought to be exceedingly reluctant to mandate a considerable change in the national culture. Or, concomitantly, to effectuate the resulting societal turmoil.

So, there were legitimate, intelligent, meritorious arguments made by the lawyers advocating in support of Prop 8 and DOMA at the Supreme Court. They were entirely different than the nonsense we usually hear.

Now whether the Court--i.e., a majority of the Justices--is persuaded is another story. Remember, there were also arguments made in Court against Prop 8 and against DOMA.

The Court will likely render it's decisions in the Prop 8 and DOMA cases in a couple of weeks. In the meantime, we'll look at the arguments at the Court against those laws.

Albany Law’s Bonventre Explains Latest in Supreme Court Same-Sex Marriage Cases
FEB 25TH - 8:52 PM
Both sides in the same-sex marriage debate are beginning to make their respective cases ahead of the US Supreme Court’s hearings on the issues.The justices will hear arguments into two separate cases next month. One challenges the Federal Defense of Marriage Act, the other seeks to overturn California’s Proposition 8. And the parties in both cases have begun filing briefs with the court.
Albany Law School professor and author of the New York Court Watcher blog Vin Bonventre explains the latest developments.
Vin Bonventre Interview

Albany Law’s Bonventre on Supreme Court and Same-Sex Marriage
DEC 10TH - 8:52 PM
On Friday, the US Supreme Court announced it will hear areguments in two landmark cases involving same-sex marriage. One case originates from New York and challenges the constitutionality of the Defense of Marriage Act, otherwise known as DOMA. The other is a challenge to the state of California’s Proposition 8 vote, which struck down same sex-marriage after courts in the Golden State had legalized it.
No matter which way the justice rule, their decisions will have a lasting and historic impact. Albany Law Prof. Vin Bonventre explains the options.
Vin Bonventre Interview