As the Court's term comes to a close, it customarily releases decisions in some of its most closely watched cases. Some of the most controversial, deeply divided and divisive issues. Blockbusters.

At this point, we are still awaiting decisions on same-sex marriage, affirmative action, and voting rights. There's not much time left in the month. Then the Justices take off for their summer break. So those decisions will come any day now.

In the meantime, however, the Court has already rendered several 5-4 decisions this month that have stirred considerable emotional response--both condemnation and applause--from Court-watchers, the bar, academics, and commentators generally. Let's take a look at two of them. (More will likely come down as soon as I write and post this.)

These two, like most of the Court's decisions, are pretty important. Beyond that, they involve matters of considerable interest to the public generally. Matters which the public generally--and not just Court-watchers, lawyers, etc.--have heard about. Have some familiarity with. Law and order matters.

DNA and the right to be silent.

In the DNA case, Maryland v. King, the Court gave its approval to taking a cotton swab of an arrestee's cheek to obtain a DNA sample. The sample is used to check for a match with an unsolved crime in a national DNA database.

In this particular case, the defendant was arrested for a violent crime--i.e., designated first-degree assault under Maryland law. He was taken to the police station for booking, including photographing and fingerprinting. Under the state's DNA collection law in question, the booking also included taking a "buccal" (cotton) swab of the defendant's inner cheek.

The DNA sample thus obtained from the defendant was then analyzed and compared with those stored in a national database. The defendant's DNA was found to match that of a sample collected years earlier in the investigation of a yet unsolved rape. The match ultimately resulted in the defendant's conviction for that rape.

The Supreme Court, in a 5-4 decision, approved the DNA collection and matching procedure against claims that it violates the 4th (and 14th) Amendment protection against unreasonable searches. In short, the Court concluded that procedure was reasonable. In my humble--sincerely humble--opinion, the Court got it right. 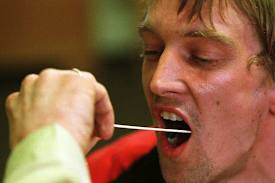 This DNA swab--again in my view--is not nearly as drastic as those government intrusions that the Court has disapproved in the past. It is certainly not on par with the brutish conduct that stirred the Court in some landmark cases.

For example, the DNA swab is surely nothing like police breaking into someone's bedroom, without first obtaining a warrant and without probable cause to believe that the person has committed a crime, and then forcibly taking the person to a hospital where he is tied down, a tube is inserted down his throat, and his stomach is pumped to expel the drugs he has just ingested. As Justice Frankfurter said for the Court in Rochin v. California (1952), that "shocks the conscience."

Nor is the DNA swab anything like police breaking into someone's home, again without a warrant (although lying that a warrant was obtained) and without probable cause, wrestling and handcuffing the person, and rummaging through the person's bedroom. It was that conduct that led the Court to impose the exclusionary rule on the states in Mapp v. Ohio (1961).

Nor is the DNA swab nearly as invasive of private activities as police wiretapping or eavesdropping or otherwise electronically listening to private phone conversations, engaged in private places by private persons--again, without the police having a warrant or any other legal justification. It was such conduct that led the Court to adopt its modern search and seizure standard, intended to protect all our "reasonable expectations of privacy" from unjustified government intrusion, in Katz v. U.S. (1967).

More significant than that, the DNA swab isn't nearly as invasive, intrusive, brutish, or even inconvenient or annoying as police activities that the Court has already approved. Indeed, approved without requiring any warrant, without any probable cause to believe the person has committed a crime, without any reasonable suspicion of the same, without, in fact, any justification or any reason whatsoever.

For example, police hovering over someone's backyard in a helicopter, hoping to find some evidence of criminal activity. The Supreme Court has already approved that. It has held that such police investigation is perfectly constitutional, and that no warrant, or probable cause, or reasonable suspicion, or any other reason for doing so is necessary. Florida v. Riley (1989).

Likewise, the Court has already approved the police entering private property--even ignoring "No Trespass" signs and a fence--hoping to find some evidence of criminality. There is no constitutional search and seizure problem, as long as the police don't get too close to the owner's house, and they don't need any warrant, probable cause, or any reason at all. Oliver v. U.S. (1984).

So too the Court has already held that a driver who is stopped for nothing more serious than a minor traffic violation--say, for instance, not wearing a seat belt, or even a passenger not wearing a seat belt--may be arrested, handcuffed, taken to the police station, searched, booked, and jailed while the ticket is being processed. That no warrant is needed. Nor is any reason to believe that the person has done anything else illegal. Nor any reason to believe that the person has any evidence of a crime or anything dangerous in her possession. That's right: any person stopped for the most minor offense may be arrested, handcuffed, searched, and jailed during "processing"--no reason whatsoever needed to make it constitutional. just a nice, easy bright-line rule. Atwater v. Lago Vista (2001)[Seat belt violation].

So, a DNA swab? A cotton swab rubbed on a person's inner cheek? A person who has already been lawfully and justifiably arrested, for a violent crime, based on probable cause, searched for any evidence or anything dangerous, taken to the station for booking, photographed and  fingerprinted and subjected to other procedures incident to being placed in a holding cell--all entirely reasonable and constitutional.

The DNA swab under such circumstances is hardy as invasive of one's privacy, not nearly as intrusive on one's person or property, not nearly as unjustified as any of those procedures--and many many more--which the Supreme Court has already approved as constitutional.

And beyond that, the DNA swab is light years removed from the breaking and entering and wrestling and stomach pumping and house searching and private call eavesdropping of Rochin and Mapp and Katz--all that the Court properly held to violate constitutional rights because done without a warrant or probable cause or any other legal justification.

The DNA collection approved by the Court in Maryland v. King involves a minimal, painless, quick physical intrusion with a cotton swab. And it is incident to a completely lawful and justifiable arrest for a violent crime, together with photographing, fingerprinting, and other booking procedures.

The DNA sample is then compared to those stored in a database. This database is neither the property of the arrestee, nor does it contain private information about him. Rather, it contains the yet-unidentified DNA samples taken from unsolved crimes.

The value of the DNA swab and the subsequent comparison of the sample with those in the database is unquestionable. Indeed, unquestionably great. Solving unsolved crimes.

As in Maryland v. King itself. There it was a rape that occurred 6 years previous. One that had not been solved. One that the arrestee had committed. Proven with the DNA sample obtained when he was arrested for another violent crime.

The minimal physical intrusion of the swabbing versus the value of the DNA database matching? I'm going with the latter. With solving unsolved rapes and other crimes.

I've made no secret that, in my view, the modern Supreme Court has been nothing less than abysmal in its search and seizure jurisprudence. (You know, very little that the police do seems to the Court to intrude upon a "legitimate expectation of privacy" and, therefore, to be a "search." No "search," no search rights violated! E.g., see Riley and Oliver above. See also, Supreme Court: Right on GPS Surveillance--But BEWARE! (part 1), 1/30/12.)

But on the DNA swab, I think the Court got it right.

Next, we'll look at Salinas v. Texas on the right to be silent.
[Of course, the Court may issue its decisions on same-sex marriage, voting rights and affirmative action before the next post is written. If so, we may alter the order.]