It's time to revisit the matter of criminal leave applications (CLA's) granted by the Court of Appeals. That is, the number of criminal cases New York's highest court has been accepting to review on appeal.

It has now been 4 years since we last took a look on New York Court Watcher. (See notes and links at the end of this post.) We found that the Court under the then-new Chief Judge, Jonathan Lippman, had apparently adopted a policy of granting more criminal leaves than the Court had been doing in the preceding several years.

The resulting increase was stark: 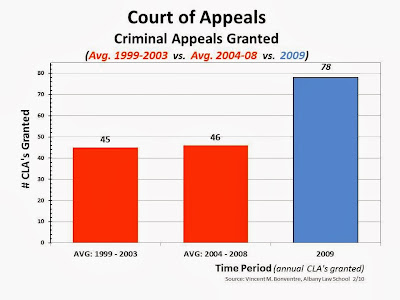 2009 was Lippman's 1st year. (Actually, his 1st partial year, inasmuch as it was Feb. 11 when he took his seat on the Court.) Graph 1 shows what the contrast looked like at the end that year. As we saw 4 years ago, CLA grants by the Court's Judges rose dramatically, and did so right away.

Lippman had expressed concern, shortly after his appointment, about the Court's reduced criminal leave grants in previous years. He made clear that he intended to do something about it. He obviously did.

But what has happened since? Was the increase in 2009 just a one-time spurt? Well, let's take a look.
GRAPH 2 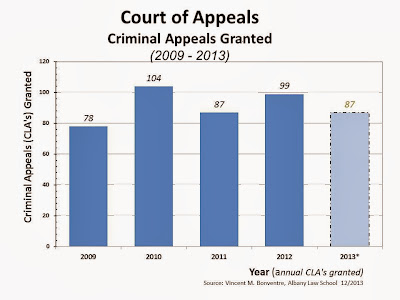 As shown in Graph 2, the increased CLA grants that began in Lippman's 1st year has continued. Indeed, each of the following years has seen an even greater number of grants than in 2009.
[N.B. The figure for 2013 is a projection based on the data available for the year at this time.]


It should be noted that the numbers reflected here are my own findings and not based on the Court's annual reports. Some minor discrepancies are the result of differences in calculation. For example, where multiple defendants were granted an appeal from the very same Appellate Division decision, I counted that as a single grant.

Nevertheless, despite any differences between my own and the Court's figures, the ultimate revelation is identical. The Court has continued to accept more criminal cases for review throughout Chief Judge Lippman's tenure than it had been doing in the years before he assumed the center seat.

To put these Lippman-era figures in context, let's look at the numbers for the past 25 years.
GRAPH 3 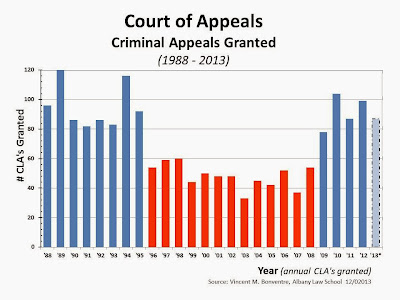 As we discussed in those posts a few years ago--and as made vivid in Graph 3--between 1996 and 2008 the Court reduced the number of criminal leaves it was granting. Indeed, the change was sharp. About half as many CLA's were being granted as before.

After Lippman became Chief and the issue was addressed, the number of CLA grants rose again. The change was just as sharp as it had been before--only in the opposite direction.

To simplify the graphics, let's take a look at the data in 5-year averages.
GRAPH 4 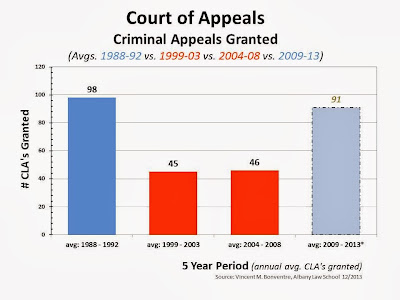 Could it be more clear?

So, the question naturally arises--as it has, and has been explored previously on New York Court Watcher--how many CLA's are being granted by each of the individual Judges? Who grants a lot? Who a little?

AND, therefore, is it luckier for a prospective appellant to have a CLA assigned to some Judge(s) and not to some other(s)? We'll take a look in the next post.

Notes
An article by Joel Stashenko in the New York Law Journal a few years ago reported that criminal lawyers were critical of the significantly reduced number of criminal cases then being accepted by the Court of Appeals. Stashenko quoted the newly appointed Chief Judge Lippman expressing his intention to address the matter. [See Joel Stashenko, "Chief Judge to Review Why Court Accepts Few Criminal Appeals," NYLJ, April 22, 2009. Note: I was a source--on the record--for that article.] A series of posts on New York Court Watcher showed that CLA grants did rise almost immediately thereafter.
Those posts explored the drop in CLA grants during the Kaye era, the increase early in the Lippman era, and how often each of the Judges were granting CLA's. [See NY Court of Appeals: Granting Criminal Appeals--Up, Down, Now Up Again? (Part 1: Overview), Oct. 27, 2009, through (Part 10: Who's Granting Now?), Jan. 26, 2010.]