[Dateline: Back home.
But now I'm beset with some dreadful winter illness. I suppose it's payback for 2 weeks in the glorious Sonoran Desert sun of Arizona. Nevertheless, onward with the final installment on this CLA series.]

As many readers are aware, the decision for New York's highest court to hear an appeal in a criminal case is made by a single Judge. Criminal Leave Applications (CLA's) are assigned randomly and equally among the Judges. The decision to grant or deny each application rests solely with the Judge to whom it has thus been assigned.

With that in mind, take a look:
(click graphs to enlarge)
GRAPH 1 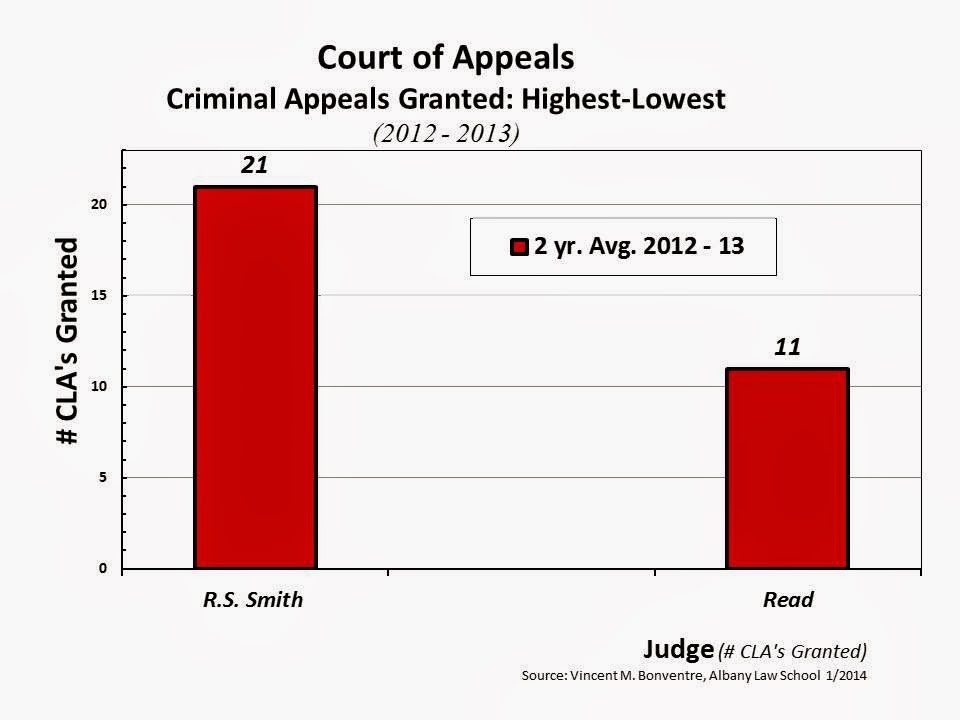 Yes, those are the average number of CLA grants by Judges Robert Smith and Susan Read, respectively, over the last 2 years. The highest and lowest granters on the Court today.

So, does it make a difference? Specifically, a difference which Judge is assigned a particular CLA? Is there a greater chance that an application will be granted if it is assigned to some Judges rather than to others?

To put it bluntly, is the success of a CLA as much about the luck of the draw as it is about intrinsic merit? Is it simply much luckier to have a CLA assigned to some Judges and not others? Does the fate of a criminal case depend upon which Judge is assigned the application?

Well, for years there's been as much grumbling about that as about the dwindling number of CLA's being granted. As we have seen in previous posts, however, CLA grants have increased dramatically under Chief Judge Jonathan Lippman.

And yet, there remains the question--no, let's not mince words--the real problem about the luck of the draw. That is, the difference among the Judges in granting CLA's. The difference in their willingness to grant applications assigned to them.

Let's take another look at some of the numbers we've been dealing with in this series.


First, lets consider the situation several years ago. More specifically, to reconsider which Judges were granting the most CLA's and which the fewest. The highs and the lows. Here's what the annual averages were for the last 5 years under Chief Judge Kaye:
GRAPH 2 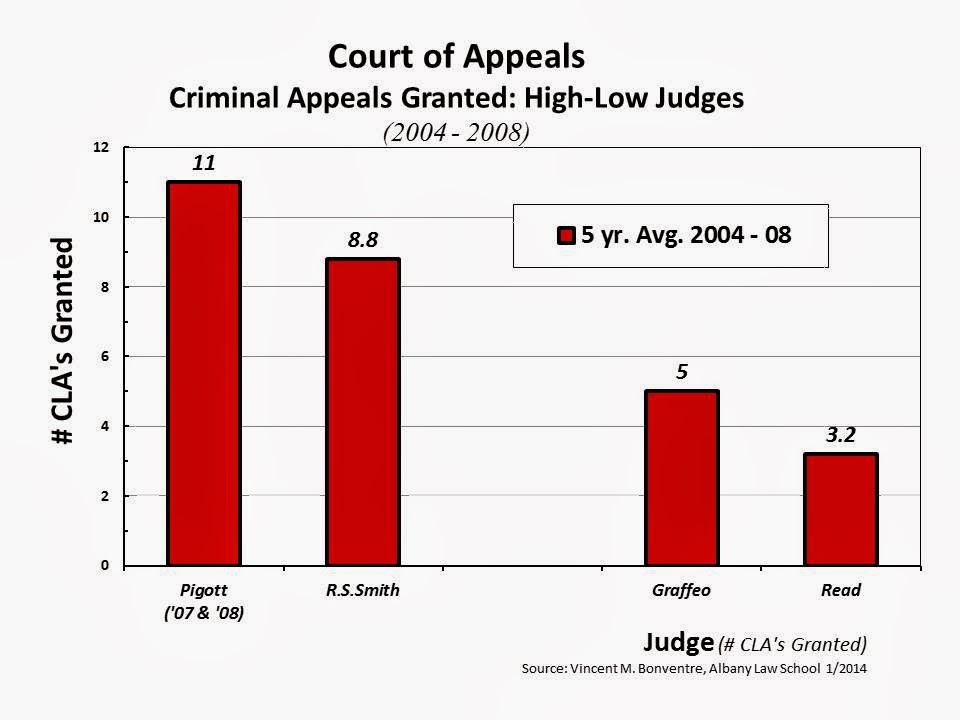 As we've noted in previous posts, Judges Eugene Smith and Robert Smith granted the most CLA's at that time. Judges Susan Read and Victoria Graffeo the least. Though the numbers were fairly low across the board during those years, the Judges at the high end of the Court were proportionately granting many more CLA's than those at the low end. 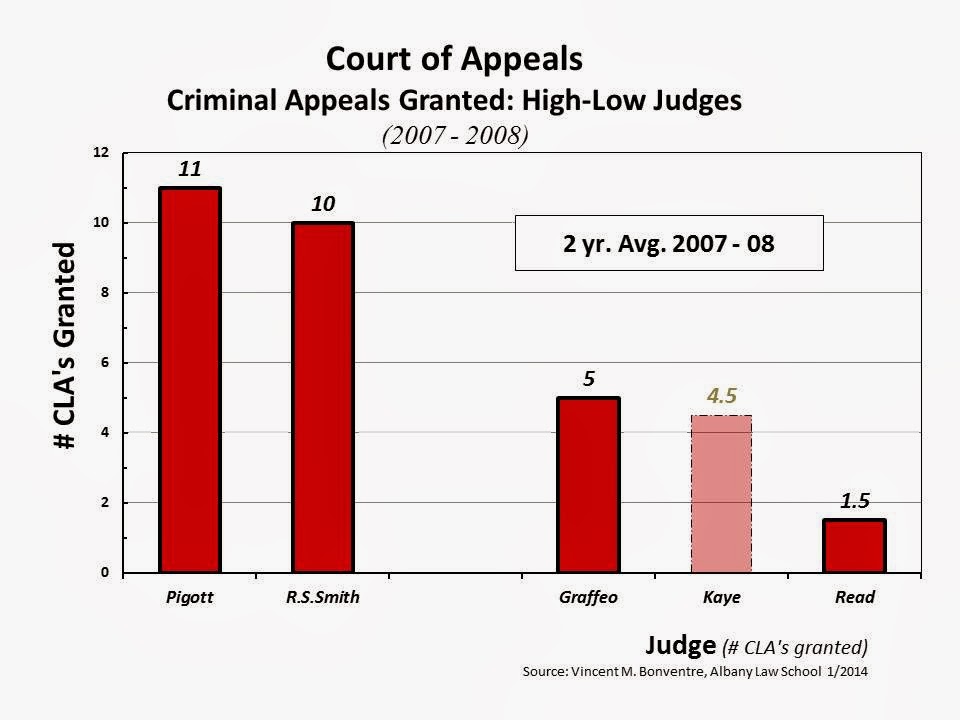 As depicted in Graph 3, the numbers--and Judges--for the 2-year period were basically the same as for the 5 years we looked at in Graph 2. Pigott and Smith, the highs. Read and Graffeo (together with now-former Chief Judge Kaye), the lows. And the difference between the highs and lows was similarly very substantial.

Now let's move to the present. The Court under Lippman.

Again, let's first look at a 5-year period--the 5 years immediately following the Kaye era we just viewed. That 5 years also brings us right up the present and includes the entire period with Lippman at the helm thus far. Here are the annual averages for the Judges still on the Court today: 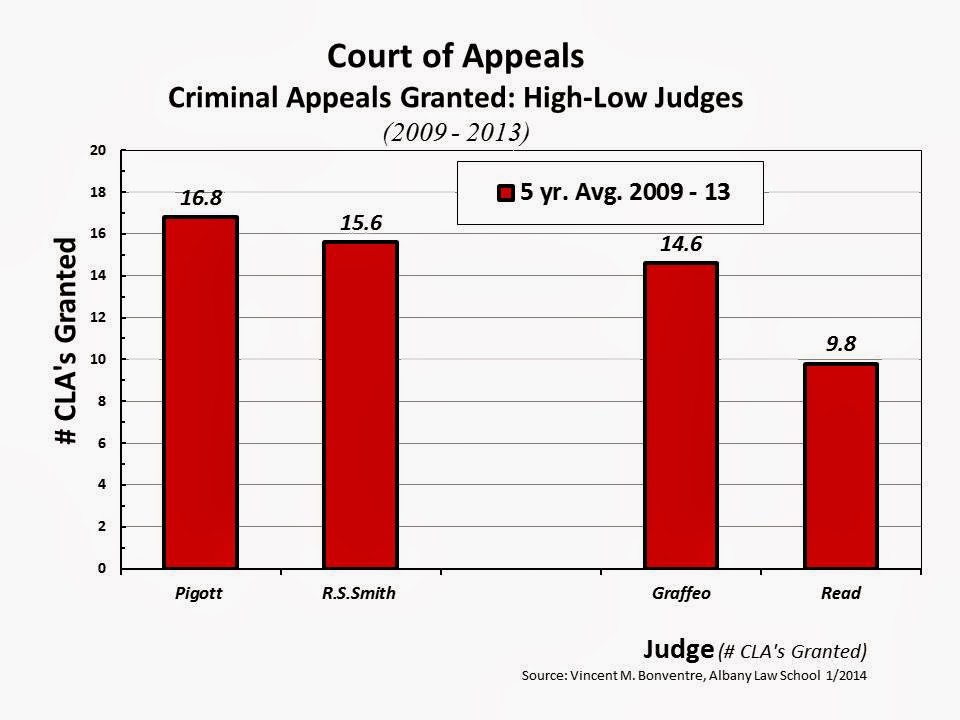 The same 2 Judges, Pigott and Smith, granted the most CLA's. The same 2, Read and Graffeo, the least. But, there were major changes.

There were significant increases in the annual averages for both the high and the low Judges. Indeed, the numbers for Read and Graffeo soared from what they had been.

Beyond that, the contrast between the high and low Judges also changed significantly. Over this 5-year period, Judge Graffeo (one of the "low" Judges) was granting virtually the same number of CLA's as Pigott and Smith (the 2 highs). Only Judge Read's numbers remained significantly lower than the others.
[The 2 newest members of the Court, Jenny Rivera and Sheila Abdus-Salaam, have not been included. They have not been on the Court long enough to have any meaningful CLA record.]

Finally, let's narrow our focus to the last 2 years. How have the Judges' CLA numbers been most recently? 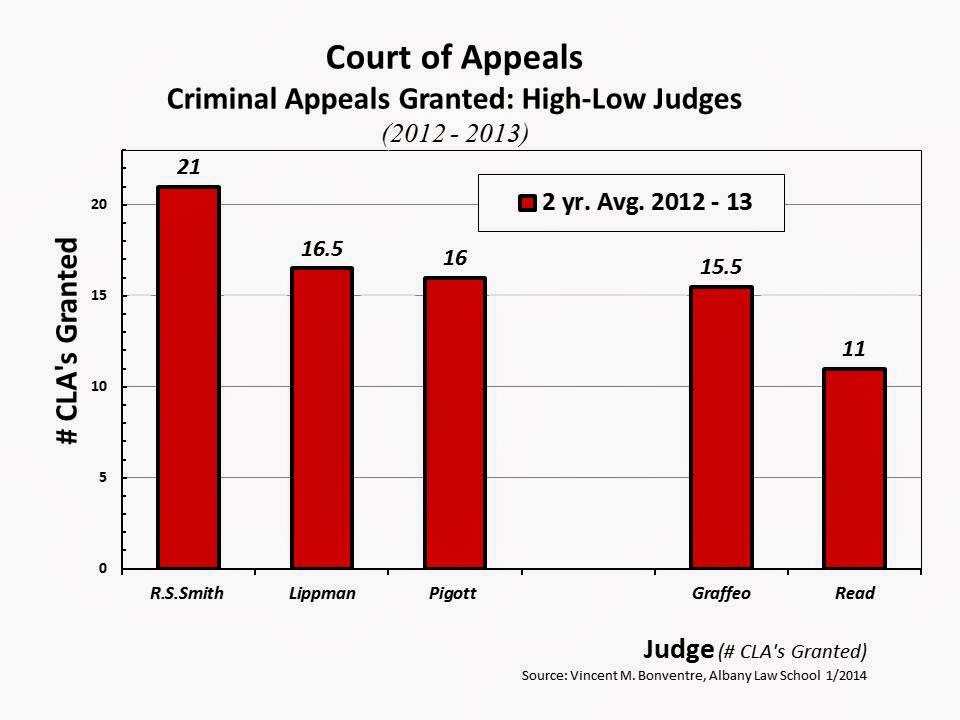 Well, some differences, but mostly the same.

We already saw Judge Smith's numbers in Graph 1. His numbers have been among the highest for every time-period we've considered. But for the past 2 years, his numbers have even been considerably higher than before. In fact, they are by far the Court's highest.

Among the Judges still on the Court, Judges Read and Graffeo remain at the low end. But as we saw for the 5-year period (Graph 4), Graffeo's CLA grants for the most recent 2 years are virtually equal in number to those of Pigott (and now Lippman) at the Court's high end.

In other words, regarding the Judges at the low end, there is no real difference between Graffeo's CLA numbers and those of Judges at the high end (other than "outlier" Smith). And, as we saw for the 5-year period, only Read actually trails.
[Note again that Judges Rivera and Abdus-Salaam have not been included. And as mentioned in the previous posts, the numbers for 2013 are extrapolations based upon the figures already available for most of that year when calculations were made.]

So, what does all this tell us?

Well, it's once again clear that more applications for appeal in criminal cases are being granted today under Chief Judge Lippman than was true prior to his appointment. Many more.
Indeed, all of the Judges on the Court, both the high granters and the low granters, are granting CLA's at much higher numbers.
More than that, at least one of the formerly low granters, Judge Graffeo, is now granting CLA's at the same high rate as the Judges who have long been the highest granters on the Court.

But...just as the number of CLA grants among the Judges was very uneven in the Kaye era--some granting significantly more than others--it remains uneven today.
Looking at the most recent numbers, it's clear, for example, that a lawyer and his client whose CLA is assigned to Judge Smith has a better chance of a favorable decision--a much much better chance-- than if the CLA was assigned to Judge Read.
Indeed, this unevenness (inequity?) has long been true.

In fact, that is precisely what many lawyers are complaining about to each other in private.

This resulting lack of evenness, equality, equity, should really be addressed.
This is no new idea.
There have been calls from the State and NYC bar associations and others over the years to revise the process by which CLA's are decided.
The former paucity of CLA grants was addressed quickly and effectively in the past few years.
It is long overdue for the persistent unevenness, unequal treatment, and inequity in the CLA process to be addressed as well.