Here's wishing the newly inaugurated President lots of success in doing what's best for our country.

If Scalia's view of gay rights--"homosexual sodomy," as he insisted on putting it--was anachronistic and offensive, his positions on crime and punishment were downright medieval. 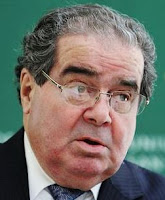 Yes, this may sound like over-the-top criticism. But even self-proclaimed Scalia admirers, at least most of them, would find the positions he advocated to be startling. Indeed, very few Scalia enthusiasts are likely aware of his actual record on legally acceptable punishment. They are almost certainly unaware of his extreme views on what constitutes "cruel and unusual."

Let's review Scalia's actual record. The positions he actually advocated. And again, let's consider whether the supposed Scalia fans--the newly inaugurated President, his prospective Supreme Court nominees, and the Senators who will vote on confirmation--are really fans of that, or would be willing to admit it.

Scalia insisted that excessive punishments, no matter how extremely excessive, were perfectly constitutional. In fact, he insisted that the Constitution's "cruel and unusual" prohibition only prohibited "flaying alive" and similarly barbaric punishments. Nothing else.

Yes, you read that correctly. (I wish I were kidding.)

Harmelin v. Michigan (1991)
This case involved a state law that mandated life imprisonment, without the possibility of parole, for possession of a large quantity (6.5+ grams = ~1 1/2 pounds) of cocaine. By a 5-4 vote, the Court upheld the sentence.
Justice Scalia wrote the opinion for the Court's majority.

To be precise, however, only 6 paragraphs of Scalia's 36 page writing in Harmelin constituted the majority opinion. As for the rest of what Scalia wrote, only Justice Thomas signed on.

Of the remaining 7 Justices on the Court, 3 voted in a separate concurring opinion written by Justice Kennedy. They concludd that the life sentence for that drug crime was not too harsh. Together with Scalia and Thomas, that made a majority of 5 votes to uphold the sentence, for one reason or another. The remaining 4 Justices dissented. They argued that that the sentence was too harsh. In sum, 7 of the 9 Justices--the 3 who concurred in the result and the 4 who dissented--disagreed vehemently with all but a few paragraphs of Scalia's 36 page opinion.

Why? What was it that Scalia wrote in those 36 pages that 7 of the 9 Justices would not join?

Other than the 6 paragraphs that garnered a 5-4 majority, Scalia devoted his 36 page opinion to his view that harsh sentences, regardless of how excessive, did not violate the Constitution. Yes, the 8th Amendment explicitly prohibits "excessive bail" and "excessive fines." But as for "punishments," the 8th Amendment only prohibits what is "cruel and unusual." And in Scalia's view, even the most excessive punishments are not covered by "cruel and unusual."

Here are his own words:


[T]here is no cause to believe that the provision was meant to exclude the evil of a disproportionate punishment. [The opposite] argument has force only for those who believe that the Constitution prohibited everything that is intensely undesirable -- which is an obvious fallacy.
[My emphasis added. ("No cause" at all? And an "obvious" fallacy?)]

He further explained his rather stingy reading of the 8th Amendment's prohibition:


[A] disproportionate punishment can perhaps always be considered "cruel," but it will not always be (as the text also requires) "unusual."

He then argued that the Court's previous decision on the subject, which had held exactly the opposite of his view,


was simply wrong; the Eighth Amendment contains no proportionality guarantee.

[T]here is no proportionality requirement in the Eighth Amendment.
[My emphasis added.]


Along the way, in support of his position, Scalia cited with approval a decision that upheld a sentence of 40 years imprisonment for the possession and sale of marijuana. He also approvingly cited another decision that upheld a life sentence for a third minor offense--i.e., the fraudulent use of a credit card to obtain a mere $80 worth of purchases. Scalia even refused to concede that a life sentence imposed for a parking violation would be unconstitutional. Instead, he insisted that such extremely excessive punishments would be rare and that, even if they were adopted, the choice of the voters or legislators should be respected.

Again, 7 of the other Justices refused to join those sections of Scalia's opinion in Harmelin and would only sign onto a different 6 paragraphs of what he wrote. Justice Thomas was alone in agreeing with Scalia's entire 36 pages.

So what exactly are those "certain modes" that are prohibited by the Constitution? Scalia explained what he meant by quoting some early 19th century commentators. Those commentators had written that the "cruel and unusual" prohibition


'would not tolerate the use of the rack or the stake, or any of those horrid modes of torture, devised by human ingenuity for the gratification of fiendish passion.'
[And]
'various barbarous and cruel punishments inflicted under the laws of some other countries...furnish sufficient reasons for this express prohibition. Breaking on the wheel, flaying alive, rending assunder with horses, various species of horrible tortures inflicted in the inquisition, maiming, mutilating and scourging to death, are wholly alien to the spirit of our humane general constitution.'
[My emphasis added.]

One might well agree with those commentators. The "cruel and unusual" prohibition would certainly seem, at the very least, to prohibit such punishments. But according to Scalia in Harmelin, such "'horrid modes" were the only punishments that were prohibited by the 8th Amendment. Not to be misunderstood, Scalia proceeded to dismiss the views expressed by other commentators of the same time period, as well as in judicial decisions, that "cruel and unusual" referred to more than that. Those contrary views, according to him, were either wrong or irrelevant.

Now, someone might suggest that Scalia was overstating his position. Maybe he was only emphasizing his real point that the Constitution does not prohibit punishments just because they are excessive. Well, no. Scalia later made clear that he meant exactly what he wrote in Harmelin. For example, there was the lethal injection case 17 years later.

Baze v. Rees (2008)
In this case, a 7-2 majority of the Court upheld the lethal injection procedure used by Kentucky and other states. Writing for the Court, Chief Justice Roberts explained that punishment would be unconstitutionally "cruel and unusual" if it presented an "objectively intolerable risk" of "severe pain," and if that pain could be "significantly reduce[d]" by a "feasible, readily implemented" alternative. In short, the Constitution is violated if there is no "legitimate penological justification for adhering" to that currently used painful punishment.

Justices Scalia and Thomas agreed that the lethal injection at issue was valid. But they refused to join the Chief Justice's opinion. They emphatically rejected his formulation for "cruel and unusual."

Scalia, and Scalia alone, joined Thomas's separate concurring opinion to express their shared view about the 8th Amendment. The "cruel and unusual" prohibition only prohibits punishments with


the defining characteristic of burning at the stake, disemboweling, drawing and quartering, beheading, and the like...[that] were designed to inflict torture as a way of enhancing a death sentence; [that] were intended to produce a penalty worse than death.
[My emphasis added.]

That's right. Just like Scalia had written in Harmelin, the Constitution only prohibits punishments like  "maiming, mutilating" and "drawing and quartering, beheading, and the like." Today, with Scalia gone, Thomas is the only Justice remaining who embraces that extremely constricted view of "cruel and unusual punishments."

Do the avowed Scalia admirers, including the supposed Scalia-types that are being touted as prospective Supreme Court nominees, share that extremely cramped view of the 8th Amendment? Are they even aware that Scalia had such a view?

Would they--the new President, the Senators, and the nominees--be willing to admit and defend that view at Supreme Court confirmation hearings? Excessive punishments, even extremely excessive ones--fine? Painful punishments, even unnecessarily painful, except for disemboweling and the like--fine? I guess we shall soon see.

Before concluding, mention should be made of another one of Scalia's views, expressed in Atkins v. Virginia (2002), about executing the severely mentally disabled. By a 6-3 vote, the Court held in that case that the death penalty imposed on a defendant who had a 59 IQ was unconstitutional. Scalia disagreed. He joined the dissenting opinion of Chief Justice Rehnquist disagreeing with the Court's decision. But Scalia also wrote a separate opinion himself to add his own protest that


mental retardation does not render the offender morally blameless [and]
that society’s moral outrage sometimes demands execution of retarded offenders.

Then there's the related matter of torture. Scalia repeatedly insisted that government's torturing of an inmate, a prisoner, or a detainee does not violate the Constitution. His reasoning? The Constitution only prohibits "cruel and unusual punishment." So unless torture is an explicit part of a judicially imposed criminal sentence, it is not per se "punishment" and thus, according to Scalia, it is not constitutionally prohibited. (Once more, not kidding.)
(See e.g., Antonin Scalia's Case for Torture, The Atlantic [2014]; Justice Scalia on the Record, 60 Minutes' Lesley Stahl Interview [2008].)

Then there's the execution of someone who is innocent. Scalia actually dissented when the Court ordered a federal trial judge to consider a substantial claim of innocence by a murder defendant who might have been wrongfully convicted and sentenced to death. (In re Davis [2009].) Scalia-- in an opinion joined only by Thomas-objected to the Court's ruling. Why? This is what he wrote:


This Court has never held that the Constitution forbids the execution of a convicted defendant who has had a full and fair trial but is later able to convince a habeas court that he is ‘actually’ innocent.

That position was nothing new or out of the ordinary for Scalia. It was actually just a repetition of a view  he had advocated for a long time. So, for example, 16 years earlier, in Herrera v. Collins (1993), he wrote a separate concurring opinion to express his view that:

There is no basis in text, tradition, or even in contemporary practice (if that were enough), for finding in the Constitution a right to demand judicial consideration of newly discovered evidence of innocence brought forward after conviction.

Well, we could go on. But hopefully the point is well made. Scalia had some....uh...very curious, even frightening, views about punishment and what the Constitution permitted. Do his self-proclaimed admirers really admire those views? Really agree with them? Are they even aware of his views? Well, that is Scalia's actual record.

Next in this series, we'll take a look at yet another aspect of Scalia's actual record.