The Democrats in the Senate are right on this one. Judge Neil Gorsuch, President Trump's nominee for the Supreme Court, is indeed backward and extreme. Not necessarily him personally--I don't know him nor do I know others who do. But to be sure, his jurisprudence, as he himself has explained it and as he has applied it in deciding cases, is backward and extreme. 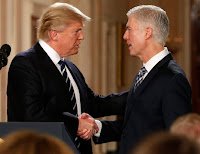 In fact, that is why he is supported so strongly by conservative Republicans, and other social conservatives. That is why he was placed on the list of recommended nominees from which Trump picked him. That list was produced by the Federalist Society and the Heritage Foundation, They are two very ideologically conservative organizations. They do their homework. They know his record.

Those strong supporters may not prefer the labels "backward" and "extreme." But no doubt, that is why they really like him.

Let's consider Gorsuch's own words.
Judges, he has said, should apply the law "focusing backward, not forward," in accordance with "what a reasonable reader at the time...would have understood the law to be."
And again, "judicial power" is "not a forward-looking but a backward-looking authority." In short, apply what the words originally meant.

Ah, no wonder social conservatives like him so much. Looking "backward," applying what constitutional provisions meant "at the time," as Gorsuch urges, just happens to produce decisional results that social conservatives would prefer. It's also no wonder why some of the most socially and politically conservative judges--and politicians and commentators who support them--embrace this so-called "originalism" and "textualism."

So, for example, consider the Constitution's "equal protection of the laws" guarantee. That provision has long been a major battleground between conservatives and liberals. It became part of the Constitution after the Civil War, with the ratification of the 14th Amendment in 1868.

Looking "backward," to what it meant "at the time," would certainly exclude equal rights for gays and lesbians. Certainly, in 1868, the ratification of the 14th Amendment was not meant to protect gays and lesbians. Applying the equal protection guarantee in a "backward""at the time" manner, as Gorsuch urges, would still permit laws that criminally punish private, consensual, same-sex intimacy between adults--let alone same-sex marriage. It would also permit laws that intentionally discriminate against gays and lesbians in employment, housing, restaurants, hotels, etc., etc.

That's right. The Constitution's equal protection guarantee says nothing about gays or lesbians or transgenders. And those persons were absolutely not--looking "backward"--what equal protection was about "at the time" in 1868.

Indeed, Judge Gorsuch's hero, the late Antonin Scalia--the foremost proponent of this so-called "originalist-textualist" approach that Gorsuch has ardently embraced--took exactly that position. The Supreme Court modern era decisions that have extended equal protection to gays and lesbians and same-sex couples were among the most hated and denounced by Scalia. What was Scalia's claimed reason? That the equal protection guarantee did not mean that in 1868. [Scalia on gay rights.]

But this looking "backward" and "at the time" approach goes well beyond allowing discriminatory treatment of gays and lesbians. How about women?

The equal protection guarantee was certainly not intended, in 1868, to insure equal rights for women. It would never have been ratified in 1868 if its purpose was to require that women be treated equally with men. That laws treating women differently and unequally were no longer valid. Looking "backward," equal protection of the laws for women was not what was meant "at the time." In fact, it was not until 100 years later that the Supreme Court finally did give equal protection that meaning and outlaw gender discrimination.

Again, Gorsuch's hero, the "originalist-textualist" Scalia, openly insisted that constitutional equal protection did not apply to women. And why? Because that's not what it meant when it was ratified. [Scalia on women's rights.]

Equal protection was certainly not intended to end racial segregation when added to the Constitution in 1868. It would never have been ratified if its purpose was to require that African-Americans be allowed to share the same schools, restaurants, hotels, spaces on the bus and railroads, etc., with white persons. At most, "separate but equal" was as far as equal protection was intended to go "at the time." Indeed, it was not until 1954 that the Supreme Court expanded the meaning of equal protection to abandon "separate but equal' and to outlaw segregation.

Of course, the same could be said for so many other constitutional guarantees--e.g., the right to the assistance of counsel, search and seizure protections, free "speech," the right to private sexual choice (even between married couples), etc., etc. Looking "backward" to what they meant "at the time," these were not the rights we enjoy and cherish today as Americans. They were much narrower, much more limited, and didn't mean then what they mean now.

We'll look at some of them in the next post.

But for now, even without looking further, it should be clear that Judge Gorsuch's approach to the law is backward--the term he himself uses--and extreme.