New York's highest court, the Court of Appeals, "granted the fewest number of criminal appeals in a decade-and-a-half" last year. According to a report in the New York Law Journal, figures for 2017, which were provided by the Court itself, indicate that number to be 25, or 1.11% of the 2.244 applications. (See Court of Appeals Hears Fewest Criminal Cases in 15 Years, by Colby Hamilton, NYLJ, January 30, 2018.)

The Court's figures, however, don't go much deeper than revealing the overall number of "Criminal Leave Applications" (CLA's) that were granted and denied. The figures do not indicate how many CLA's were granted or denied by each member of the Court. Indeed, the figures published each year in the Court's official Annual Reports do not include any such information.
[For those unfamiliar with Court of Appeals procedures: CLA's are decided by one Judge. The incoming CLA's are distributed randomly among the Judges, and the Judge who receives a CLA is the only one who decides it.]

So let's look behind the CLA numbers. See where the dramatic drop is coming from.

Now, I could not independently confirm the calendar-year 2017 figures provided to the NYLJ by the Court. The raw underlying data is not yet completely available on at least 2 accessible databases that would corroborate each other and would give me confidence. But I could independently determine the figures for a slightly earlier 12 month period--from fall 2016 through summer 2017. The complete raw data for that year-long period is already available on at least 2 separate databases to check against each other. So, at this point, I'm much more confident in those numbers, and those are the ones we'll focus on.
[The data that I do have for calendar-year 2017 are from 2 separate sources that are still a bit dissimilar, likely because at least one of those sources is not yet complete through the year. IAE, it turns out that the unconfirmed figures for calendar year 2017 and the figures I have been able to confirm for the slightly earlier 12-month period are very similar, and they similarly reveal the same dramatic drop in CLA grants.]

Okay, what are the figures for fall 2016 thru summer 2017? Specifically, what are the number of  CLA's granted by each Judge during that 12 month period, shortly into the tenure of Chief Judge Janet DiFiore--which began on January 21, 2016? Here they are graphically: 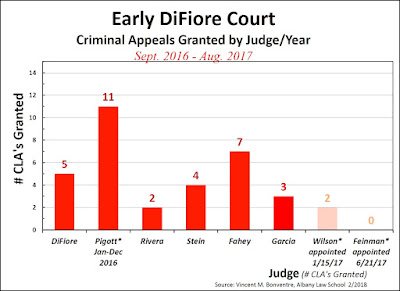 Five of the Judges were on the Court during that entire 12-month period. So their receptive grant numbers reflect the entire year. Judge Eugene Pigott was forced off the Court by mandatory retirement age at the end of 2016. So the grant number for him reflects that calendar year--which includes the entire year of DiFiore's appointment in January, as well as the 3 weeks immediately prior. As for Judges Rowan Wilson and Paul Feinman, they were each appointed during 2017 and, thus, their grant numbers reflect less than a year on the Court.

With that in mind, the graph reflects that Judge Pigott granted the most CLA's. After him, in descending order, was Judge Eugene Fahey, Chief Judge DiFiore, and then Judges Leslie Stein, Michael Garcia, and Jenny River:
In a vacuum, those numbers don't necessarily tell us much. So let's put them in perspective. Let's compare them to the number of CLA grants for the very same Judges during a similar period under Chief Judge Jonathan Lippman--as well as for the Chief Judges themselves. Here is a graphic look at the figures for fall 2016 thru summer 2017 alongside those for fall 2014 thru summer 2015--the last such 12-month period under Lippman: 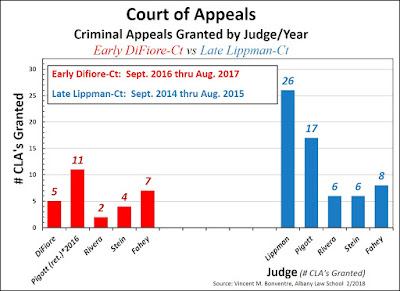 As shown in the graph, here are the contrasting numbers, DiFiore Court versus Lippman Court:
Let's look at these numbers somewhat differently. In this next graph, the respective numbers for each Judge, and for the Chief Judges, are juxtaposed:
(click on graph to enlarge) 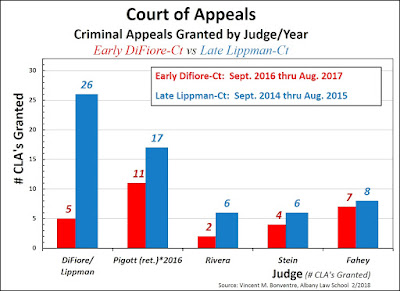 The contrast could hardly be clearer. Obviously, the starkest contrast is between the number of CLA's granted by Chief Judge Lippman (26) and those by his successor (5). The drop for Pigott from the Lippman to the DiFiore courts is also quite stark (17 to 11). And although not as dramatic, the number of CLA grants by each of the other Judges has also dropped.

Well that's the underlying data on CLA grants for each of the Judges who have served with both Chief Judges Jonathan Lippman and Janet DiFiore--and for Lippman and DiFiore as well.

There's little question about it. As the NYLJ reported, significantly fewer applications for the Court of Appeals to review criminal cases are being granted by the Judges. And clearly significantly fewer than when Jonathan Lippman was Chief Judge.
[Here's the link to the Jan. 30, 2018 NYLJ article by Colby Hamilton.]

In the next post, we'll put this current drop in CLA grants in the context of modern Court of Appeals history in which a similar sharp drop previously occurred.