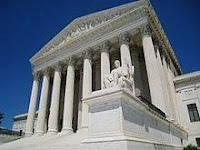 In Gill v. Whitford, the case involving hyper-partisan gerrymandering, the Supreme Court chose not to render a final decision. Instead, the Court returned the case to the lower court for further proceedings.

At issue was the carving of voting districts by a state legislature--here, in Wisconsin--in such a way that favors the political party in power (the Republicans) over a different party (the Democrats), in gross disproportion to the votes the respective parties received statewide, even when the disfavored party receives a majority of those votes. Several Democratic voters challenged the gerrymandering as an unconstitutional dilution of their right to vote. The Supreme Court neither rejected nor upheld their challenge.

What the Court did do was to send the case back to the court below for a fuller exploration of the question of "standing." That is, the Supreme Court returned the case to the lower federal court to allow the two sides an opportunity to more fully litigate whether the challengers had suffered a personal and particularized injury to their voting rights. If the challengers can demonstrate that, then they have the right to bring this lawsuit complaining about the gerrymandering and the Supreme Court has the constitutional authority to hear the case on appeal. If the challengers cannot so demonstrate, then the opposite.

Chief Justice Roberts wrote the majority opinion which was joined by all the Justices except Thomas and Gorsuch. Those two would simply have dismissed the challengers lawsuit and put an end to the case.

In any event, despite the Court's decision not to reach the merits of the case and to rule on the constitutionality of hyper-partisan gerrymandering, today's ruling is not without some especially notable aspects. Let's consider a few of them:


We may get another decision in a major case this coming Thursday. There are some tough, controversial ones to come. (See Supreme Cases Awaiting Decision.) We shall see.