Despite the objectors' religious belief that abortion is--or is akin to--the killing of a human being, the appeals court held that an earlier decision of the state's highest court, the Court of Appeals, was controlling authority to deny a exemption. In that 2006 ruling, Catholic Charities v. Serio, the state's contraceptive mandate was at issue. Although the Court of Appeals acknowledged the sincerity of the religious objections, it nevertheless concluded that the burden on free exercise of religion was permissible.

In last week's case, the Appellate Division, the state's intermediate court, applied the Catholic Charities precedent to hold that the state was not required to grant any exemption to the religious objectors. The constitutional guarantee of religious liberty, that court held, provides no protection for the religious objectors. They are entitled to no exemption. They must violate their religion and pay for what they sincerely believe is--or is akin to--murder. 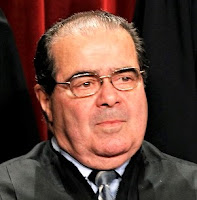 That's where Antonin Scalia's dreadful--yes, and disgraceful and dishonest--opinion in the 1990 decision in Oregon v. Smith comes in. [The full formal name of the case is actually Employment Division, Department of Human Resources of Oregon v. Smith. I'll stick with Oregon v. Smith.]

The late Justice, in his opinion for the Court, insisted that the 1st Amendment did not protect religious liberty from laws that were "otherwise valid." So as long as a law does not violate some other constitutional right, it's permissible for that law to interfere with freedom of religion. As Scalia further explained, as long as a law is "generally applicable"--i.e., it does not deliberately target or discriminate against a religion--it makes no difference if the law abridges religious liberty. And no, according to Scalia's opinion, the law doesn't even have to be a particularly important one. And no, it doesn't even matter if the government can do what it wants to do in some other way that doesn't interfere with freedom of religion.

Just in case there are doubts that Scalia, who apparently was a devout Roman Catholic, could actually dilute freedom of religion so drastically, here are his own words:


[I]f prohibiting the exercise of religion . . . is not the object of the [law], but merely the incidental effect of a generally applicable and otherwise valid provision, the First Amendment has not been offended. [My emphasis]

Not surprisingly, the Court in Smith was deeply divided. 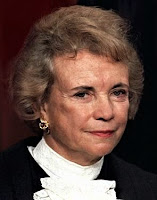 Four of the Justices disagreed vehemently with Scalia. Justice Sandra Day O'Connor agreed with the ultimate result reached by the majority, but she condemned Scalia's evisceration of constitutional religious freedom, as well as his dishonesty about the Court's prior decisions. She catalogued a long line of decisions that had protected the 1st Amendment right


by requiring the Government to justify any substantial burden on religiously motivated conduct by a compelling state interest and by means narrowly tailored to achieve that interest...The compelling interest test effectuates the First Amendment’s command that religious liberty is an independent liberty, that it occupies a preferred position, and that the Court will not permit encroachments upon this liberty, whether direct or indirect, unless required by clear and compelling governmental interests of the highest order. [My emphasis]


Justice O'Connor was justly upset with Scalia's dishonest devaluation of religious liberty. In fact, as she spelled out in her separate concurring opinion, the Supreme Court had repeatedly scrutinized interference with religious liberty very strictly. The Court had repeatedly required government to show that an interference with religious liberty was necessary for a compelling purpose. And the Court had repeatedly exempted sincere religious objectors from "generally applicable" and "otherwise valid" laws. The Jehovah's Witnesses' objection to pledging allegiance to the flag, the Seventh Day Adventists' objection to working on their Saturday Sabbath, the Amish objection to their children completing high school--all of these and other religious objections were held to be entitled to exemptions from generally applicable, otherwise valid laws in landmark Supreme Court decisions. (See respectively, West Virginia v. Barnette, 1943; Sherbert v. Verner, 1963; Wisconsin v. Yoder, 1972.)

At issue in Oregon v. Smith was a Native American religious ritual that included smoking peyote, which was illegal under the state's anti-drug law. Justice O'Connor concluded that the government's prohibition of the religious ritual was justified, but only because prohibiting the use of hallucinogens was a compelling interest. Scalia, on the other hand, denied that religious liberty was even entitled to the compelling interest/strict scrutiny test. He did so despite the well-established Supreme Court landmarks affirming that test, and despite that test's unquestioned application to every other right in the 1st Amendment. (The 3 dissenting liberal Justices agreed entirely with Justice O'Connor's recitation of the constitutional law of religious liberty, but not that prohibiting the religious use of peyote was justified under the compelling interest/strict scrutiny test.)

[I've written and spoken at length about the Smith decision and it's impact on religious liberty. See e.g., Justice Scalia's Record (Part 1), 2/18/16; Religious Liberty--commentary, interview, video, presentation [updated 5/15/13]; Religious Liberty: Fundamental Right or Nuisance, 14 U. St. Thomas L.J. 650 (2018); The Fall of Free Exercise, 70 Alb. L. Rev. 1399 (2007). Ironically, but not surprisingly, conservatives today are much more supportive of free exercise of religion than previously, and liberals much less so, because recent cases have involved majority and fundamental religions objecting to abortion rights, LGBTQ rights, and other rights favored by political liberals.]

OK then, but what about that 2014 Hobby Lobby case mentioned earlier? Didn't the Supreme Court hold that Obamacare violated the rights of religious objectors and, therefore, that those objectors did not have to pay for contraceptive coverage? Didn't the Court rule that the religious objectors were entitled to an exemption from the law? And yet, isn't the Obamacare contraceptive mandate--in words that Scalia used in Smith--a generally applicable and otherwise valid law which, according to Scalia's majority opinion in Smith, defeats 1st Amendment religious liberty?

Congress--both Democrats and Republicans, liberals and conservatives; as well as the overwhelming majority of constitutional scholars--was appalled by Scalia's opinion. So Congress passed a law, with almost unanimous support, to overrule Smith and to reimpose the "compelling interest/strict scrutiny" test. That legislation, the Religious Freedom Restoration Act (RFRA), however, applies only to federal laws. Not to state laws. Why? Well, without getting into the weeds here, the Supreme Court ruled shortly thereafter that the statutory protection of RFRA cannot overrule the constitutional decision in Smith. Consequently, the 1st Amendment's protection of free exercise of religion is still what it was defined to be in Scalia's Smith opinion, and that--not RFRA--is the federal protection for religious freedom against state laws. (See Boerne v. Flores, 1997.)

So let's be clear. The Supreme Court's decision in Hobby Lobby, protecting religious objectors from the contraceptive mandate of Obamacare, was an application of the statutory "compelling interest/strict scrutiny" protection of RFRA against a federal law. It was not about 1st Amendment constitutional protection, and it was not about a state law. In fact, if the case were about constitutional protection, or if it was about a state law, the religious objectors would have lost! That's because Scalia's "generally applicable" and "otherwise valid" standard would have applied, and the contraceptive mandate would have defeated any religious liberty objections.

Now, with that as background--the minimalist 1st Amendment constitutional protection (i.e., Scalia's opinion in Smith) and the rigorous federal statutory protection (RFRA, which does not apply to state laws)--we can better understand New York's religious liberty decisions. The only 1st Amendment constitutional protection against New York laws is Scalia's opinion in Smith. And the statutory RFRA protection--i.e., the Hobby Lobby decision--does not apply.

We'll look at those New York decisions--the Court of Appeals in Catholic Charities (2006) and the Appellate Division in last week's Roman Catholic Diocese--in the next post.

[Disclosure: Readers may be curious and deserve to know that I strongly believe in a woman's right to choose; I do not share the religious belief that human person-hood begins at conception and therefore that abortion is always wrong; but I do believe that freedom of religion and conscience are extremely vital to a free society (although I am not much of a religious believer myself) and I think that Scalia's opinion in Smith was dishonest and disgraceful and has dreadful consequences for 1st Amendment free exercise of religion.]