Democrats decried the hypocrisy of the Republicans who had refused to hold a hearing during an election year when President Obama nominated Judge Merrick Garland. The Democrats also sounded alarms about the likely ramifications of an ideologically conservative Barrett replacing liberal Ginsburg. Republicans, not surprisingly, insisted that there was no such hypocrisy. They also lauded Barrett's avowed judicial restraint in decision-making, while insisting that her asserted embrace of originalism and textualism had nothing to do with any perceived ideological bent. After four days, the pre-ordained result seemed nothing but pre-ordained.

Whatever the partisan wrangling and dissembling may otherwise suggest--about the Barrett nomination and Barrett herself--there are some simple realities. Ruth Bader Ginsburg was selected by Democratic President Bill Clinton. She was heralded for her successful litigation on behalf of equal rights for women, and her record on the Court over 27 years was unmistakably liberal across the wide swath of issues from abortion rights to affirmative action to gender equality to immigration to LGBTQ rights to racial justice to the rights of the accused, etc.

By contrast, Amy Coney Barrett was selected by Republican Donald Trump. Her nomination was urged by supporters because of her ideological leanings that are distinctly contrary to those of Ginsburg, and for her judicial record which, albeit brief, reflects a polar opposite jurisprudence. In short, by all accounts, she is very ideologically conservative.

So let's take a look at the change that's in store--a change for the Court with a Justice Barrett who presumably would behave consistently with her record as Judge Barrett.

Here's what the ideological line-up of the Justices looked like in the immediately past term, with Ginsburg still on the Court: 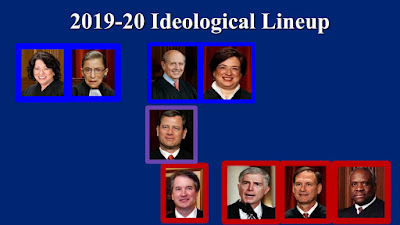 When considering those issues where there is a clear divide between liberals and conservatives, there is a clear breakdown of the Justices. As depicted above, the liberal or "left" wing of the Court has included Justices Sonya Sotomayor and Ruth Bader Ginsburg, as well as Stephen Breyer and Elena Kagan whose records have been slightly--and just slightly--more ideologically mixed. On the Court's conservative or "right" wing are Justices Clarence Thomas and Samuel Alito, followed closely by Neil Gorsuch and, somewhat less ideologically consistent, Brett Kavanaugh. More ideologically mixed, yet still conservative--especially when contrasted with the Court's liberals--is the Chief Justice, John Roberts.
But what about the terms "liberal" and "conservative"--how exactly are those terms being used? Well, not at all as synonymous with so-called judicial "activism" versus "restraint," loose versus strict interpretation, adherence to precedents and deference to the elected branches versus the opposite. No, none of that. Those dichotomies tell us precious little about judges being ideologically "liberal" or "conservative."
Rather, just think about liberal Democratic politicians and their supporters contrasted with conservative Republican politicians and theirs. Think about those issues where those two camps generally and usually vehemently divide. Think separation of church and state, gun rights, LGBTQ rights, affirmative action, abortion rights and other women's rights, voting rights, immigration, the death penalty, environmental regulations, worker rights versus business, campaign finance, and, of course, Trump. When considering those "hot button" issues and how the Justices vote on them, there are clear patterns. That's what's depicted in the line-up, and that's how we popularly and pretty accurately characterize the Justices.
So it's certainly no surprise that on those issues just listed, as well as other similarly "hot button" matters, Justices Sotomayor and Ginsburg rarely, if ever, voted on the same side as Justices Thomas and Alito. Indeed, all four liberal Justices were almost always on the opposite side of Thomas and Alito. Moreover, it was uncommon for any of the the four liberals to be on the same side as any of the four most conservative Justices. And among the Court's conservatives, only the Chief Justice--at least during the past two terms--sided with the liberals on a somewhat regular, if not usual, basis.
So, the line-up has been 4 liberals and 5 conservatives on the Court--again, with the Chief Justice's voting record being more moderate or centrist than the other conservatives, at least within the Court's ideological spectrum. Let's look at that line-up once more before looking at the change that's in store if Judge Barrett is confirmed.
(click to enlarge) 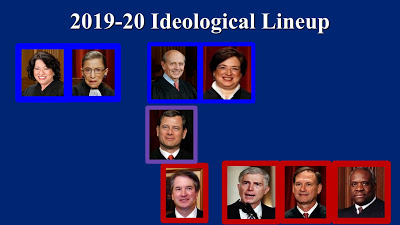 Now, let's remove Ginsburg from the depiction and add Barrett:
(click to enlarge) 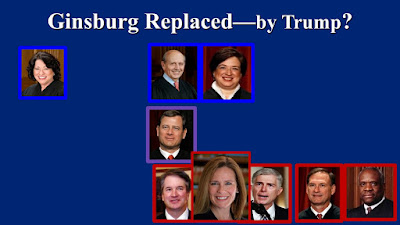 Based on the previously listed evidence, it is safe to assume that her ideological bent is no less conservative than that of Trump's first two nominees, Gorsuch and Kavanaugh. Indeed, she might well be even more ideologically aligned with most conservative among the conservative Justices--i.e., Thomas and Alito.

To be sure, it is within the realm of possibility that Judge Barrett might experience an ideological and jurisprudential conversion over her tenure on the Court. It has certainly happened to others. Republican appointees have sometimes transitioned to staunch jurisprudential liberals. Nixon appointee Harry Blackmun, Ford appointee John Paul Stevens, and Bush (41) appointee David Souter come readily to mind. And Reagan appointees Sandra Day O'Connor and Anthony Kennedy, even if never quite liberals, both became "swing votes" during their tenures, joining their liberal colleagues on some major social issues.

One more note before concluding. Imagine for a moment that remote chance that the Barrett nomination were to fail. What would the Court look like if a President Biden, rather than President Trump, were to fill the Ginsburg vacancy? Take a look: 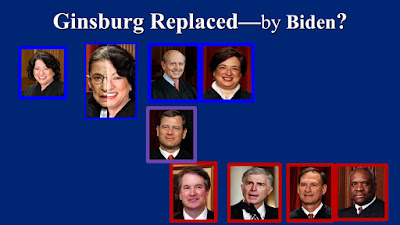 A Biden appointee to fill the Ginsburg vacancy would not change the ideological line-up of the Court from what it has been. Presumably, Biden would nominate a political liberal, someone in the mold of a Ginsburg or Sotomayor--or Breyer or Kagan. His nominee would certainly not be in the politically conservative mold of a Thomas or Alito or Gorsuch or Kavanaugh--or even Roberts. But such a nominee, if successfully appointed and then aligned with the other liberal Justices, would merely keep the Court's ideological line-up as it was before: 5 politically conservative Justices to 4 liberals, or 4 to 4 with the Chief Justice as the swing vote.
In short, with Trump's pick--a dramatic ideological shift to the right. With a Biden pick--status quo ante; no liberal tilt.
In the next post, we'll consider Barrett's record as a federal appellate judge on the 7th Circuit.