A review of the New Mexico Supreme Court's decisions over the past five years reveals that 41 of them divided the justices. That is, in 41 cases between August 1, 2003 and July 31, 2008, at least one justice disagreed publicly with the majority of the court in a dissenting opinion. That represents approximately 17% of 245 total decisions. (A previous post on the New York Court Watcher discussed this and the contrast with Arizona's high court. See Arizona and New Mexico Supreme Courts: Contrast in the Southwest, August 6, 2008.) Of these 41 nonunanimous decisions, 26 of them involved criminal law, criminal procedure, or some other issue of criminal justice. The decisional and voting breakdown in these 26 divided criminal decisions shows some patterns that are as fascinating [at least to court-watching junkies] as they are clear. Let's begin with the most basic--and perhaps most telling--of patterns: the pro-prosecution versus pro-defendant voting and decision tabulations. 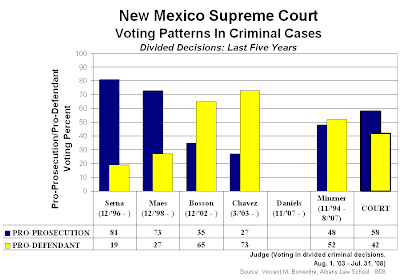 (BTW, my wife has advised me, and demonstrated to me, that the graph may be enlarged and thus made clearer by simply clicking on it. I had no idea.)

GRAPH 1 depicts the pro-prosecution versus pro-defendant voting record of each justice in the 26 divided criminal cases. More specifically, it shows the percentage of these decisions in which each justice took the position more favorable to the prosecution on the issue that divided the court; it likewise shows the percentage of positions taken more favorable to the accused. It also depicts the corresponding pro-prosecution and pro-defendant percentages for the court itself--i.e., the decisions themselves.

[It may be worth noting for some that the study of a court's divided decisions has long been understood to be particularly valuable. They are especially revealing. See, e.g., the brief discussion on this blog in New York Court of Appeals: More Dissents in Kaye Court (Part 2: Who? How Many? What?), July 10, 2008, and a somewhat more detailed one in my New York's Chief Judge Kaye: Her Separate Opinions Bode Well for Renewed State Constitutionalism at the New York Court of Appeals, 67 Temple L. Rev 1163 (1994), available at http://ssrn.com/abstract=1154671.]

At one end of the New Mexico court's ideological spectrum have been Justices Patricio Serna and Petra Jimenez Maes. Their voting records were, respectively, 81% and 73% pro-prosecution in the divided criminal cases. At the opposite end of the court's spectrum have been the current Chief Justice Edward Chavez and Justice Richard Bosson. Their voting records, respectively, were 73% and 65% pro-defendant. In between these two pairs of justices was Justice Pamela Minzner with an evenly divided record: 48% pro-prosecution, 52% pro-defendant. (The Court and the state mourned the passing of Justice Minzner in August 2007.) The record of the court as a whole was closest to that of Justice Minzner, but somewhat more pro-prosecution at 58%. (Justice Charles Daniels, who was appointed to the court in November 2007, has thus far participated in only one divided criminal decision. [He joined a pro-defendant dissent.] Obviously too few too for the purposes here.)

So, Serna and Maes at one end, Chavez and Bosson at the other, the court itself and Justice Minzner somewhere in between. That's roughly the way it was over the course of the past five years.

Interestingly, however, a closer examination of the five years reveals some changes within them. The direction of the court and the voting of some justices seem to have changed somewhat in the latter part of the five year period. We'll take a look at that in a forthcoming post.