Well, the 1st Monday in October has come. The Court is back. The new term has begun. And what can we expect?

That question is exactly why we are looking at last term. What the Court decided and how the individual justices voted. It's the best way to get some ideas about how the Court and how the justices will behave this term.

This is the 3d post --4th if the "graph-ic recap" post is counted--in a series on New York Court Watcher looking at decisions that define the Court's '07 - '08 term. (See GRAPH-ic Recap - Supreme Court's 2007-08 Term: The Defining Decisions (Parts 1 & 2 Recap in Graphs: Discrimination & Cultural Issues), September 24, 2008; Part 2: Cultural Issues, September 20, 2008; Part 1: Discrimination, September 16, 2008.) This installment looks at "law and order." The decisions and individual votes in criminal cases--again, especially the difficult, controversial, big-issue cases--tell us a great deal about how the Court and each of its justices balance crime control against due process (and sometimes against other critical interests as well). Three cases we have not yet discussed in previous posts seem particularly telling. These, when viewed together with 3 other criminal cases already considered under "cultural issues," provide decisional and voting patterns that afford insight into the ideological leanings of the Court, collectively and individually, in criminal justice matters.

Here's how the Court's decisions and the Justices' votes in these law and order cases look in graphic form. (Again, click to enlarge.)
GRAPH 1: Law & Order Decisions 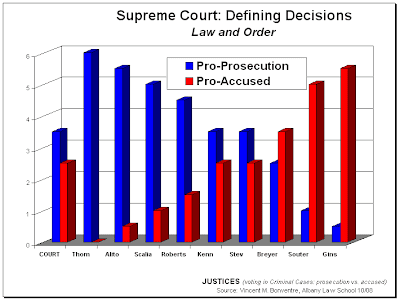 OK, looks nice, and hmmm, interesting. But let's talk about the cases the graph reflects.

The 3 criminal cases we have not yet discussed are:
United States v. Williams (2008) - the federal statute criminalizing pandering and soliciting child pornography is constitutional: it is not "overbroad" (i.e., it is not so broad that it incidentally criminalizes too much constitutionally protected expressive activity), nor is it "void for vagueness" (i.e., it satisfies the constitutional due process requirement that laws be clear enough to know what is prohibited).
Votes (7-2): Roberts, Stevens [wrote concurring opinion], Scalia [wrote Court's opinion], Kennedy, Thomas, Breyer, and Alito versus Souter [wrote dissent] and Ginsburg.

Virginia v. Moore (2008) - an arrest and search that are illegal under the law of the state where made are not "unreasonable" under the constitution and, thus, do not violate the constitutional right against unreasonable searches and seizures.
[The Court reversed the decision of the Virginia Supreme Court--that wild bastion of liberalism--which had held that the illegal arrest and search were constitutionally unreasonable.]
Votes (9-0): Roberts, Stevens, Scalia [wrote Court's opinion], Kennedy, Souter, Thomas, Ginsburg [wrote separate opinion], Breyer, and Alito.

Medellin v. Texas (2008) - American courts are not bound by a ruling of the International Court of Justice enforcing the rights of the accused guaranteed by an international treaty ratified by the United States, despite the President's declaration that the ruling and the treaty are binding international law.
Votes (6-3): Roberts [wrote Court's opinion], Stevens [wrote concurring opinion], Scalia, Kennedy, Thomas, and Alito versus Souter, Breyer [wrote dissent], and Ginsburg.

So, in terms of law and order:
In Williams it was crime control (child pornography) versus the First Amendment. [Crime control/the prosecution won.]

In Kimbrough it was crime control through harsh punishment versus equitable treatment of similar offenders. It was also the power of judges to determine an appropriate sentence versus the power of the legislature to limit judges' discretion. [Due process/the accused won.]

In Kennedy it was crime control through the ultimate penalty versus proportionality in punishment. [Due process/the accused won.]

In Baze it was crime control through the ultimate penalty versus avoidance of needless cruelty. [Crime control/the prosecution won.]

[One explanatory note about the graph. Although the votes in each case are generally counted as either simply pro-prosecution or pro-accused, in some cases some votes were deemed half and half. So in Moore, although Ginsburg voted with the rest of the Court to uphold the conviction, her separate concurring opinion made clear that she took a less rigid pro-prosecution position than her colleagues. So her vote was deemed half pro-prosecution and half-pro-accused. Similarly, in Baze, as discussed in the previous post on cultural issues, the plurality opinion of Roberts was ideologically midway between the separate concurring opinion of Thomas (joined by Scalia) which saw no possible problem with lethal injection and the dissent of Ginsburg (joined by Souter) which argued that there were fatal constitutional problems. So the votes of Roberts and those who joined him and his reasoning were deemed half and half.]

Not surprisingly, Thomas, Alito, Scalia, and Roberts have the most pro-prosecution (most conservative) voting records in these cases--and in that order in these cases. Ginsburg and Souter have the most pro-accused (most liberal). Stevens and Breyer, whose voting records are generally ideologically comparable to those of Ginsburg and Souter, are somewhat more conservative in these cases. Breyer, whose record in these 6 cases is still more liberal than that of the Court as a whole, voted with the conservatives to uphold the child pornography law in Williams, to uphold lethal injection in Baze, and to protect the Court's sole power to interpret the Constitution against competing state judgements in Moore. In addition to those pro-prosecution votes, Stevens voted with the conservatives in Medellin to protect the Court's sole interpretive power against international judgements as well. Kennedy, the swing vote, voted the same as Stevens in each case. That again placed him in the ideological center of the Court--as it also placed Stevens in these cases.

Well how does all this add up so far?

The next post in this series--a brief one--will view all the cases discussed thus far collectively (anti-discrimination, cultural issues, and law and order) in a single graph accompanied by a few short notes. The following post will look at the "political process" cases--the last category. Finally, one last post in this series will view all 15 cases in a collective graph with a few concluding observations.