Court of Appeals: Centrists Smith & Pigott--Independent & Contrarian, with Each Other & the Majority

Robert S. Smith and Eugene F. Pigott. As discussed in a previous post, they fall in the center of the Court's ideological spectrum in criminal cases. But that has not translated into those two being the Court's swing votes. Instead of being in the majority the most frequently among their colleagues, they in fact have been in the majority less than others on the Court. That makes them unlike centrist swing-vote Justices Anthony Kennedy and now-retired Sandra Day O'Connor who have typically determined the majority in Supreme Court decisions. (See Court of Appeals: What Lippman Inherited (Part 3 - Criminal Law Voting: Who's been in the Majority?), Mar. 20, 2009.)

So let's take another look at that Smith and Pigott voting phenomenon. If they are the Court's centrists, but are not the swing votes, not the Judges most frequently in the majority, do they at least vote together very often? When they do vote together, does that asuure or virtually assure a majority? Overall, how frequently are they together in the majority? And how do they compare with other ideological pairings on the Court?


Here in short visual form is the answer to all those questions: 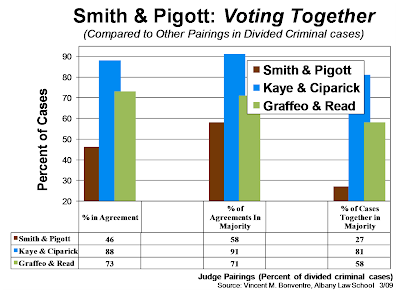 As depicted in the graph, Smith and Pigott have actually been voting together less frequently than have the liberal (more pro-defendant) pair of Kaye and Ciparick, or the conservative (more pro-prosecution) pair of Graffeo and Read. Curiously, as the Court's ideological centrists, not only have they been voting in the majority less frequently than their more liberal and their more conservative colleagues, but they have also been voting less frequently with each other than the other pairings have. So they are independent and contrarian (to borrow a term used by Smith himself) not only with Court majorities, but between themselves as well.

[The data reflected in the graph and forming the basis for this discussion are all the criminal cases in which the Court's decision was divided--at least one Judge dissented--and in which both Smith and Pigott participated. They constitute the 26 non-unanimous criminal cases since Pigott joined the Court in September 2006.]

The last item reflected on the graph--which really flows from the foregoing--only underscores further that, although they comprise the Court's ideological middle, Smith and Pigott are hardly the Judges who determine the Court's majority. When Kaye and Ciparick have voted together, they have helped to form a majority in fully 81% of all these divided criminal cases. When Graffeo and Read have voted together, they've had the majority 58% of the time. That figure may be much lower than Kaye and Ciparick's rate, but it is still more than half the cases--and more than double the rate for Smith and Pigott. When those two have voted together, they managed a majority in only 27% of the cases.

So.... It all adds up to what we've now repeated several times about Smith and Pigott. Centrists, yes. Majoritarians, no.

Now, before closing, let's be absolutely clear about something. It's very important to avoid any misconceptions about what the data shows and about what we (yes, I) might be suggesting. None of the foregoing--at least not in my view--suggests that Judge Smith or Pigott have been right about the law less frequently than other members of the Court. Let's state it another way. There is--again, in my view--no, none, zero correlation between the frequency of being in the majority and the frequency of being right or wise or prescient or anything else good--except being on the side that won. And even regarding the latter, the side that won only at that time. But not necessarily in the long run.

Indeed, there are more than a few decisions of the Court in which it seems to me that the Judges outside the majority had the better view. Actually, plenty such decisions. So if Smith and Pigott are in the majority in fewer of these tough, divided cases more than their colleagues, that to me says not a wit about whether they were less frequently right or wrong, wise or foolish.

There were certainly other Judges in the recent past who were less frequently in the majority (i.e., more frequently voting against the majority), and they seemed clearly (to me) to have had the much better view of the law than the majority. In fact, most of the time. Judges George Bundy Smith and Matthew Jasen are 2 that come to mind. (A liberal and a conservative, you might note. This is not ideologically based.) Both seemed to get it right case after case after case, despite being on the wrong side of the majority. Even Judges who were part of the majority more frequently, like Judith Kaye and Stewart Hancock. When either of them opposed the winning side, there was very good reason to doubt the Court's decision. And by analogy, on the losing side on the Supreme Court, need I say more than Holmes and Brandeis.

Enough for now. Smith and Pigott. Two fascinating Judges with fascinating dynamics on the Court.