The first post in this series on the New York Court Watcher introduced the subject of the court inherited by Jonathan Lippman as the successor to now-retired Chief Judge Judith Kaye. Who are the Judges who make up the court over which Lippman now presides? More specifically, how have these new colleagues of his been voting on the state's highest court before he arrived on the scene? What are their track records? Our examination has begun with criminal cases. (See Court of Appeals: What Lippman Inherited (Part 1-Criminal Law Voting), March 8, 2009.) Let's take another look, with a couple of new graphs to help. 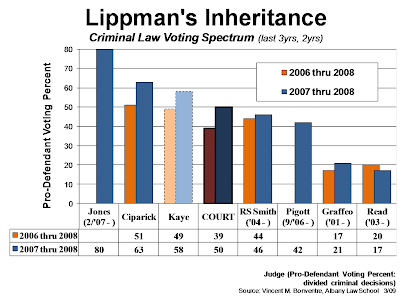 This graph is a reorganization of the one included in the March 8 post. The Judges are reordered to illustrate more clearly the Court's spectrum of pro-defendant voting--i.e., voting for the position more favorable to the criminal suspect or accused--from the most, Judge Theodore Jones, to the least, Judges Victoria Graffeo and Susan Read.

[41 cases are reflected in the graph (and in the one that follows). They represent every divided criminal law decision rendered by the Court of Appeals for the 3 year period, from calendar year 2006 through 2008. For the purposes here, that includes every non-unanimous result reached by the Court--i.e., at least 1 Judge dissented from the Court's disposition of the case. (Unanimous results accompanied by separate concurring opinions are not included, except where the disagreement on the controlling rationale for resolving the case is substantial enough that the concurrence more nearly resembles a dissent--4 of the 41 cases are of that sort.) 3 years was chosen simply to insure that the data are recent enough not to be stale and yet the period is long enough to be significant. The most recent 2 years are separately depicted as well; that is the period since Judge Jones, the last appointee before Lippman, joined the Court. (See New York Court of Appeals: The Jones Factor in Criminal Cases (Part 2) , August 19, 2008.)]

But when the very same data is depicted a bit differently on the same basic graph, some less expected patterns are highlighted. 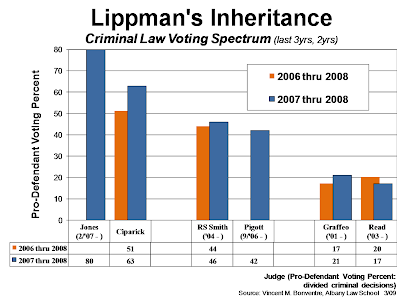 With retired-Kaye and the Court as a whole removed from the graph, and with space injected to separate some of the Judges, what emerges is 3 pretty distinct pairings among the current Court's membership.

Judges Jones and Ciparick have the most unmistakably pro-defendant (i.e., most liberal) voting records in criminal cases. Jones' record is, in fact, even distinct from Ciparick's in being so strongly pro-defendant. Indeed, in the 2 years that Jones has been on the Court, there has been a noticeable upswing in the pro-defendant records of both Ciparick and Kaye and of the Court itself. (On this last point, refer back to GRAPH 1, as well as to the August 19, 2008 post cited above.)

At the other end of the Court's ideological spectrum are Judges Graffeo and Read. They have the most unmistakably pro-prosecution (i.e., most conservative) voting records of Lippman's new colleagues. About 1/3 as pro-defendant as Ciparick's record; about 1/4 as pro-defendant as Jones's. (Reminds me of the startling contrast between Vito Titone's record [liberal] and Joseph Bellacosa's [conservative] during their overlapping years on the Court. Think also of Ruth Bader Ginsburg versus Antonin Scalia on the Supreme Court.)

But then there are the other two Republican (Pataki) appointees: Judges Smith and Pigott. Their voting records are twice as pro-defendant as Graffeo's and Read's. Yes, twice as liberal. Indeed, both Smith and Pigott have voting records as close to Ciparick's as to their fellow Pataki appointees. Their voting places them at the Court's center. Not only as the pair midway between the more liberal Jones/Ciparick and more conservative Graffeo/Read, but also (as depicted in GRAPH 1) with voting records which are ideologically very close to the decisional record of the Court as a whole.

So where will Lippman fit in? With Jones/Ciparick, Graffeo/Read, or Smith/Pigott? Or will his voting place him in between one of those pairs, or even outside one of the Court's current ideolgical ends? Maybe his presence will change the Court's dynamics and actually alter it's ideological spectrum. Time will tell.

But as for now, the Judges' voting spectrum in criminal cases is quite clear, and three ideological pairings are remarkably well-defined.

In the next post in this series we'll take a look at the voting alignments in criminal cases. Not just the ideological similarities, but who's voting with whom, as well as who's voting in the majority.