[My own guess is that, among those 4, Judge Garland tops the list. Not only is his educational, legal and judicial record quite extraordinary, but in light of recent developments, he may be a particularly compelling political choice. The attention of the nation the past few days have been fixed on the attempted terrorist car bombing in Times Square. Well, Garland just happens to have been working at the Justice Department in the Clinton administration where he supervised the Unabomber and Oklahoma City bombing prosecutions. He knows the harsh realities, obstacles and demands of dealing with terrorism under the law. Not just as a judge in an ivory tower or some other public official waxing and waning from afar. But we will see, and apparently pretty soon.]

There are at least 3 other possibilities regularly reported to be under serious consideration. Judge Sidney Thomas of Montana, Homeland Security Secretary Janet Napolitano, and Michigan Governor Jennifer Granholm. We'll take a quick look at Granholm in this post and try to get to Thomas and Napolitano before Obama makes his pick. 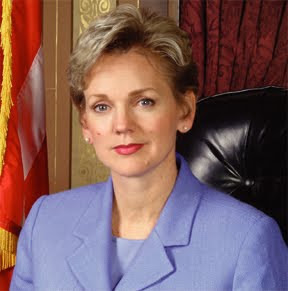 She is the Governor of Michigan, currently serving her second 4-year term. She fits Obama's bill in looking for someone from outside the monastic-like life of the appellate judiciary. As Governor she has lived the rough and tumble of politics, fighting for her positions on state law and policy, experiencing the push and pull and compromise of making that law and policy, and necessarily trying to serve the interests of her constituents. I.e., she has been working for "real" people with "real" needs and concerns, not just the names of parties in the title of appellate cases to be decided in a sterile environment, by "neutrally"applying the language of the law, wherever that might lead, with less regard for the consequences for "real" people.

Yes, that's why Obama and other politicians, as well as many judicial scholars, would prefer some Justices with more "real world" experience--experience in governance or business or serving actual people as clients (or even professors who study such things--what a crazy idea!). Any list of the great Justices includes a disproportionate number of those who had a good deal of non-judicial experience and, in fact, little or no judicial experience at all.

'Nough said. There are no such Justices on the Court now.

That's a big part of the case for Jennifer Granholm. Shortly after law school, she was appointed a federal prosecutor in Michigan. After a few years she was appointed corporation counsel for Wayne County. She was then elected the state's attorney general (and the first woman to hold that position). Four years later, in 2002, she ran for and was elected Governor (also the first woman). She won reelection in 2006 despite her Republican opponent's spending a personal fortune challenging her.

Oh, you say, so she's a good politician. And, you may also have read that she was once a beauty queen with Hollywood aspirations. OK, then. Well how about considering this: She graduated from Berkeley Phi Beta Kappa, and then from Harvard law school with honors. (Not too shabby. And pretty good indications that she's pretty bright.) She then clerked for a federal appeals court judge--just about the most prestigious position a law graduate can win. It also means that she's seen how an appellate court operates and decides cases. That is, she knows what appellate courts really do and how they really make case law.

But of all (or the few) really capable politicians, why her? Well, Granholm was an early and active supporter of Obama in his run for president. She even played the role of Sarah Palin to help prepare Joe Biden for the vice-presidential debate. After the election, she was a member of Obama's transition team. So she's an FOO, and apparently Obama's an FOG. (That's Friend of Obama and Friend of Granholm for those of you not on the inside.)

In short, Jennifer Granholm has the legal and political background--and proven skills--to commend her to President Obama, as well as to Senators who would prefer a non-judge as the next Justice. She also has the political ties to Obama such that, with all the rest that she has to commend her, he can't help but consider her.

She is also white and a Midwesterner--i.e., not a minority (who Obama typically favors--so the refrain goes) and not another Northeasterner. She is, however, Roman Catholic. Her appointment would mean 7 Catholics on the Court, 2 Jews, no Protestants. Do not dismiss the political weight of that consideration. It's a political drawback. Whether it's spoken or tacit, it will deeply bother some Senators and their constituents.

Additionally, there will no doubt be some push back--at least early on--because she lacks judicial experience. But most of that will evaporate when it is explained--as it has been in several previous posts on New York Court Watcher, including a little bit in this post--that many of the very best Justices had little or no judicial experience. Indeed, that the correlation between a great Justice and prior judicial experience is just about zero. (Justice Felix Frankfurter observed that long before I did.)

Ultimately, unless something unforeseen arises, Granholm would almost certainly be an easy confirmation. That is something else that would commend her to the President.

In the next post--unless Obama has already made his pick, and it's not Judge Sidney Thomas--we'll look at that possible nominee.

[Correction/Clarification: As a good friend reminded me after reading this post, Justice Ruth Bader Ginsburg was, of course, a noted civil rights attorney prior to her judicial career, especially for women's rights. It should be added that she was also a law professor for many years. But (and I really have no "buts" when it comes to that extraordinary person, woman, lawyer, Justice), she was already an established member of the judiciary by the time she was appointed to the Supreme Court. Justice Thurgood Marshall, by contrast, had only been a federal judge for a few years--after nearly 30 years as a civil rights lawyer extraordinaire--before being elevated to the Supreme Court. That was my intended point.]