In the last several posts, we examined the Justices' voting in the criminal law and related cases included among last term's "Top Ten" highlights. Now let's collate what we've seen. And let's do so in graphs.

We'll combine the data from the 5 cases, consider that data from several angles, and then depict the results in graphs. Indeed, this post's center of gravity will be graphs. Not the least because many readers of New Court Court Watcher understandably prefer to look at a few graphs than to wade through the [i.e., my] verbiage. Plus, graphs can show pretty starkly what the Justices really are and are not doing, regardless of their verbiage. Plus plus, I do get a kick out of these graphs--apparently a symptom of my accelerating geekage.

So let's get on with the graphs.
GRAPH 1
Government/Law Enforcement vs Individual Rights
(click to enlarge) 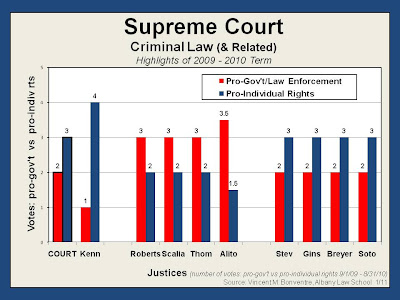 The Court as a whole (i.e., the majority) sided with  law enforcement interests in 2 of the 5 cases: in Thompkins (approving interrogation even without a suspect's explicit waiver of the Miranda right to silence) and in Skilling (upholding the "honest services" fraud law as prohibiting bribes and kickbacks).

The Court sided with the individual rights interests in the other 3: in Padilla (ruling that the right to counsel includes being warned that a guilty plea will result in deportation), in Graham (disallowing  a life-without-parole sentence for a crime committed by a juvenile), and McDonald (applying the right to bear arms to state and local gun control laws).

At the same time, the liberal Justices weren't much more likely to support individual rights than the conservatives. They were more protective of those rights (i.e., less supportive of law enforcement) in the immigrant, juvenile, and Miranda/interrogation cases. They were less protective when it came to white collar crime and gun rights. Hmm as well!

Justice Kennedy was actually the most protective of individual rights--i.e., in all cases except the Miranda/interrogation case where he sided with law enforcement. Justice Alito was the most pro-law enforcement. He sided entirely with the individual only when gun rights were involved. He split the difference between the sides (together with Chief Justice Roberts) in the immigrant/right to counsel case.

So as with most things in life, the conservative-law-enforcement versus liberal-individual-rights dichotomy depends.

Maybe it's really about the status quo versus change. Let's look. 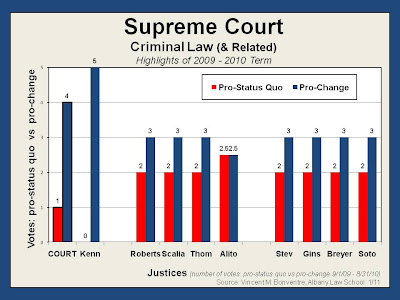 As depicted in Graph 2, the Court itself voted for change in the law in 4 of the 5 cases. More precisely, the Court adopted the position that would entail more change than the opposing position in all the cases but one.

That sole exception was the Skilling case involving the "honest services" law. The Court chose to save the statute by holding that it validly prohibits bribes and kickbacks. The opposing position, which the Court rejected, was to invalidate the law in its entirety.

Justice Kennedy voted for change in every case, including the one involving the "honest services" law. He voted with Scalia and Thomas to strike the whole provision.

The 4 conservatives all supported change (i.e., opposed the status quo) in 2 cases: to dilute the Miranda/interrogation right to silence, and to place constitutional limits on state and local gun control laws. Additionally, they each supported change, wholly or partially, in at least 1 other case.

The 4 liberals all supported change in the same 2 cases and the status quo in the same 3 others. They all supported change to enhance the right to counsel in the immigrant case, and to invalidate life-without-parole sentences for juvenile offenders. They were more supportive of the status quo in the law to retain the previous understanding (and stronger protection) of the right to silence in interrogations, to save the "honest services" statute, and to save gun control laws from an expanded right to bear arms.

So, the difference between the conservative and liberal Justices is not based upon law enforcement versus individual rights. Nor is it based on support for the status quo in the law versus change.

Maybe the difference that separates the conservative and liberal wings of the Court is the extent to which they respect the choices made by the co-equal branches of government and of state and local  governments. Maybe it's the extent to which they adhere to that axiom of judicial restraint: deference. Deference to Congress and the states and localities. Upholding duly enacted laws except when those laws are clearly unconstitutional. Unconstitutional beyond a reasonable doubt is how it's often put.

In the next post, we'll take a look--with graphs, of course--at the extent to which the Justices' voting is consistent with such judicial restraint. We'll see if that's the divide between the conservative and liberal Justices.