In McDonald v. Chicago, the Court ruled that the recently recognized 2d Amendment right of individuals to keep and bear arms was applicable against state and local laws, not only against federal ones. This is the last of the 5 criminal law-related cases among the "Top Ten" highlights of last term.

The Court had previously decided, in D.C. v. Heller (2008), that the 2d Amendment guarantees the firearm right to individuals, not simply to states to form and maintain organized militias. But because the Bill of Rights, ratified in the early years of the Republic, provides protections only against the federal government, the question remained whether such an individual firearm right was sufficiently fundamental to be a protection against state and local government infringement as well. That is, speaking constitutionally, whether the firearm right is part of the "liberty" that is guaranteed against state governments and their subsidiaries by the 14th Amendment--one of the Amendments ratified after the Civil War.

In McDonald, a 5-4 majority answered in the affirmative. State and local gun control laws throughout the country are now subject to close constitutional scrutiny. Undoubtedly, many of them will be casualties of the McDonald ruling.
Previous posts on New York Court Watcher, written shortly after the McDonald decision was rendered in June last year, discussed that case and the question of the firearm right itself. (See Supreme Court: Gun Right Decision #2--A Fundamental Right & A Blatantly Ideological Court, June 30, 2010; Guns & Rights & The States (Some Final Q's from the Kagan Hearings, Part 7), Aug. 4, 2010; Guns & Rights & The States (Concluding Q's from the Kagan Hearings, Part 8), Aug. 18, 2010.)

I made no bones about the fact that I believe the Court majority was correct. At least, that is, to the extent that an individual right to bear arms was considered basic to a free society by the Founders and Framers, that the American people have largely continued to believe the same, and that, therefore, it should be protected by the 14th Amendment against state and local government violation.

Not an absolute right, of course. No right--explicit or implicit in the Constitution--has ever been deemed absolute, or could sanely be treated as such. But it is simply very difficult to deny the American constitutional heritage of a right of individuals, not just state governments, to keep and bear arms as a necessary protection of freedom. Whatever the specific language or intent of the 2d Amendment itself, the fundamental heritage of an individual firearm right in this country can hardly be dismissed.

Since that was discussed at length (ad nauseam ?) in those previous posts, we need not spend much time on it here. Well not the exact same thing, and not too much time. Just a few comments.

Let's recall how the Justices voted. Here's the breakdown pictorially. 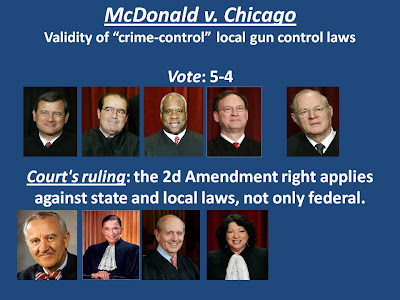 The 4 conservative Justices (Roberts, Scalia, Thomas, and Alito) voted to "incorporate" the firearm right into the 14th Amendment's protection of "liberty." That makes the right applicable against state and local government laws. The conservatives won because they were joined by swing-vote Justice Kennedy.

The liberal Justices (Stevens, Ginsburg, Breyer, and Sotomayor) voted that the firearm right was not part of the "liberty" guaranteed by the 14th Amendment. If they had won, state and local governments would not be bound by the Constitution to honor any firearm right. Those governments would be entirely free under the Constitution to enact gun control laws. (Gun rights might be protected under their own state constitutions, but there would be no federal constitutional protection.)

Most states, as well as many of their cities, have enacted gun control laws. Because of the McDonald ruling, all of those laws are now subject to constitutional scrutiny. All of them will now  have to pass the test of whether they are sufficiently necessary, as well as sufficiently well drafted (i.e., narrowly focused and not too burdensome), to outweigh the firearm right.

So why do states and localities have gun control laws? That might seem obvious. But it will help this discussion to spell it out.

States and localities have enacted these laws as part of their efforts to combat crime. To help reduce violent street crime. To help reduce the most violent domestic abuse. To help reduce attacks upon police. To reduce shootings and reduce killings. There are other reasons, e.g., to help reduce firearm accidents. But largely, gun control laws are law enforcement tools. Reducing the proliferation and access to guns in order to reduce crimes committed with guns.

Let's consider that in terms of the traditional ideological spectrum. Law-and-order versus individual-rights. Crime control versus due process (to use Herbert Packer's classic criminal justice models). Safe streets versus the right to be let alone. War on crime versus freedom from government intrusion. Community interests versus personal liberty.

Yes, conservative versus liberal. Right wing versus left wing. Republican versus Democrat. And yes, not only the ideological division among the public, but among the Justices as well. Cases dealing with confessions. With the death penalty and punishment generally. With searches. With arrests. With rules of evidence. With prosecutorial latitude. With legislative prerogative. Such cases evoke that divide.

But when it comes to gun control laws enacted as crime fighting tools, the sides are reversed. Among the public and among the Justices.

There is consistency in the seeming inconsistencies. There is a common denominator in the divide. But it's not the nonsense we usually hear.

It's about ideological (as in perspectives, presumptions, and partisanship) and emotional (as in sympathies, familiarities, comfort, and other feelings) leanings. The 4 conservative Justices have much of that in common. The same for the 4 liberal Justices.

Anyone who reads this blog is familiar with the following refrain: sorry, but there's no Wizard of Oz. Let alone 9 of them. The Justices are like the rest of us. They are not disembodied intellects divining the meaning of pre-existing law or transcendental truths. They have their prejudices, presumptions, biases, beliefs, leanings. Their decisions are greatly affected by that. Just as our own decisions are.

The Court in the McDonald case was deeply divided. The vote was 5-4.  And yet all 9 Justices were so certain that they were right and that those on the other side were wrong. That's not open-minded, unbiased, constitutional exegesis. That's not disinterested, selfless wisdom. That's ideology and emotion. That's what drove the vote on the right to bear arms at issue in McDonald--just as it has on other close, controversial, politically-charged, hot-button issues in other cases.

In the next post, we'll graph the voting that we've seen in the 5 criminal law-related cases in this series. And in the interests of full disclosure, we'll even graph how I would have voted.