The remaining 2 cases included within the "Top Ten" highlights of the Court's last term are a bit different than the first 3 previously discussed. These 2 cases do not deal with street crime, violent crime, crime typically committed by undesirables or in parts of town that they have made undesirable, crime that strikes fear in the citizenry and stokes calls for government-sanctioned violence in return. These are not cases about crimes that evoke the usual law-and-order versus rights-of-the-accused divide.

No, "honest services" fraud and owning firearms do not fall easily within the same class as those other crimes. "Honest services" fraud, a white collar crime, is more likely to have been committed by a "respectable" member of the community as by a "common" thug. And owning guns for self or home defense or for hunting, even if in violation of some state or local regulation, is just as likely to be engaged in by an otherwise law-abiding neighbor as by a violent miscreant.

No, these crimes are different. They evoke different reactions, politically, ideologically, emotionally. And they do so for the Justices as well as for most everyone else.

The 3 criminal cases discussed previously in this series on New York Court Watcher dealt with issues on which the typical law-and-order versus rights-of-the-accused--i.e., politically conservative versus liberal--divide is pretty clear. A drug crime committed by an immigrant who is being deported, because of the incompetent advice of his lawyer. An armed burglary committed by a minor who was sentenced to prison for life, without any chance of ever being released even if he matures into a law-abiding adult. A murder proven by a confession, obtained by persistent interrogation even after the suspect refused to waive his right to remain silent.

It's pretty clear how the conservative tough-on-crime and the liberal fairness-and-rights crowds would each view those cases. It's also pretty easy to guess how the conservative and liberal Justices would likely vote. And as we've discussed in the last few posts, that guess would be accurate--with just a few tweaks. (See Supreme Court: Highlights...(Part 8--More Criminal Law: Miranda), Jan. 4, 2011; (Part 7--More Criminal Law Decisions), Jan. 3, 2011; (Part 6--Criminal Law Decisions), Dec. 14, 2010.)

But with "honest services" fraud and firearm violations, the conservative versus liberal positions are differently aligned. On these, it's the liberals who are more demanding of law-and-order and being tough-on-crime. It's the conservatives who are likely to be more suspect of government law enforcement and more sympathetic to the rights of law breakers. And the Justices don't react too differently than other, mere mortal, liberals and conservatives.

Let's take a look at the 2 cases dealing with these crimes. First, the case of "honest services" fraud.

At issue in Skilling v. U.S. was the meaning and very validity of the federal law that criminalizes such conduct. Actually, the law in question is a particular provision of the federal mail fraud statute. The "honest services" provision makes it a crime for an official--in fact, apparently any employee, public or private--who, while on the job, engages in conduct for personal gain rather than for the employer's interests.

The defendants in Skilling and the two similar cases decided the same day (Black v. U.S. and Weyhrauch v. U.S.) were not street hoodlums, organized gangsters, or other violent reprobates. Rather, they were corporate executives (e.g., the former Enron CEO in Skilling) and a public official currying favor with an oil services corporation (i.e., the state legislator in Wyerhrauch).

The charges against them involved various forms of corruption. The common denominator was that they failed to honestly provide the services they owed to their employers, whether they be businesses or the public. That instead, they used their positions dishonestly for self-aggrandizement.

The government argued that the "honest services" law covered any such self-interested conduct, including conflicts-of-interest and even failure to disclose potential conflicts. The defendants' lawyers argued that the law was so vague, so unclear, that it violated constitutional due process. In short, the law's meaning is impossible to ascertain and so it's impossible to determine what conduct it actually prohibits. In fact, the law on its face would seem to cover lots of perfectly legal or innocuous conduct. 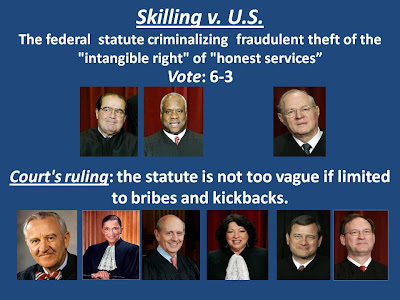 Conservative Justices Scalia and Thomas, as well as the usually-swing vote Justice Kennedy, agreed with the defendants. In their view, expressed in an opinion by Scalia, the law should be invalidated, period. Who knows what it means? It provides no notice of what conduct is criminal. It's unconstitutionally vague, unclear, amorphous, and has to go. Congress should go back to the drawing board and write a new law if it wants one.

So, not conflicts-of-interest. Not concealing them or concealing possible ones. To be sure, that's not clear from the "honest services" law.

That's fundamental to judicial restraint. Deference to a co-equal branch. Deference to the democratically elected representatives of the people. Reluctance to invalidate the work of a co-equal branch. Upholding the work of that other branch where possible. Invalidating laws only when they cannot be saved. Only when the laws are hopelessly unconstitutional beyond a reasonable doubt.

Yes, those are basic tenets of judicial restraint. And the Court's majority abided by those tenets. It upheld the law. It read the law in a constitutional manner. It gave the law a narrow interpretation, limiting it to its unquestionable core. The law clearly forbids bribes and kickbacks. Reading the law to forbid that, and nothing more, saves it. In that way, the law does not violate constitutional due process.

And just who was abiding by those tenets of judicial restraint in Skilling and in the other "honest services" cases? The Court's 4 liberals!

Yes, Justice Ginsburg, who wrote the opinion, together with Justices Stevens, Breyer, and Sotomayor. They were even joined by Chief Justice Roberts and Justice Alito. So, when the issue was a white collar crime, the liberals (plus Roberts and Alito) were the restraintists.

Viewed differently--but with equal irony--who was most sympathetic to the rights of the accused? Who insisted on the most vigorous protection of criminal defendants? Who insisted on enforcing due process to the fullest? Who was most concerned about curbing the prosecutorial latitude of  government? Who was most willing to exercise judicial power to invalidate a constitutionally flawed act of the other branches of government?

Suddenly, when dealing with white collar crime, it was NOT the liberals. No, the 4 liberal Justices, when dealing with crime by corporate executives and government officials who are buddy-buddy with them, were less sympathetic to the protestations of the defendants. Less willing to invalidate the constitutionally flawed work of the Congress. Less willing to enforce due process to the fullest and find an undeniably vague law unconstitutional. A little more concerned with law and order.

Certainly more concerned than the Court's most conservative Justices. Yes, just as ironically, it was Justices Scalia and Thomas (together with the usual-swing vote Kennedy) who were now the full-throttle activists.

So, law-and-order versus rights-of -the-accused. Conservative versus liberal? Not necessarily. At least not where white collar crime is involved.

So, judicial restraint versus activism. Deference to the people's representatives versus judicial power. Upholding Congressionally enacted laws versus invalidating them. Conservative Justices versus liberal ones? Again, not necessarily. Not where white collar crime is involved.

Political, ideological, emotional dispositions. These, at least as much as the usually nonsensical arguments about judicial restraint versus activism, influence the Justices' votes. This is evident in the voting of the 4 liberal Justices and conservative Justices Scalia and Thomas in the white collar "honest services" cases.

It is also evident, and to an even greater extent, in the gun rights case decided last term. We will turn to that case, McDonald v. Chicago, in the next post. That case is the final criminal decision in the "Top Ten" highlights we've been discussing in this series.