In the last few posts before the hiatus [See block, next paragraph.], we were looking at the highlights of the Supreme Court's most recent, completed term--2009-10, aka the October 2009 Term. (See the several posts from Supreme Court: Highlights...(Part 5--Church & State Decisions), Nov. 9, 2010, back to Supreme Court: Highlights, Patterns & Implications from Last Term (Part 1), Sept. 29, 2010.) Now let's turn specifically to the criminal law decisions among those "Top Ten" cases. Rights of the accused versus law & order usually elicits deep-seated ideological and jurisprudential predispositions. In short, criminal cases are among the most revealing of revealing cases.


[The last few weeks have been spent with technical administrative matters: renewing and transferring domains; updating the layout, design and functions of the New York Court Watcher blog; and creating a new website for the Center for Judicial Process, which we (the student staff and I) have just reorganized and reactivated. As a result, I think I've learned enough that I am no longer a total luddite on such technical matters.
Of course, I have not been consumed 24/7 with such matters. There have also been end-of-semester classes, multiplicity of faculty meetings and matters, and a myriad of other time-eating routine annoyances, inconveniences, and humdrums of life--as well as  family concerns and events that put everything else into perspective. But for now, back to this blog and, specifically, to the highlights of the Supreme's output last term.] 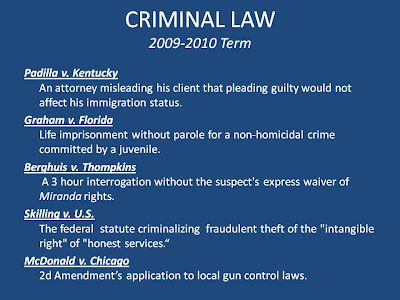 What might be very surprising is that this quite conservative Court sided with the criminally accused--and potential criminal defendants--in 4 out of the 5 cases. But, and this is a very significant BUT, a closer consideration of the cases demonstrates that the Justices by and large voted precisely as one might expect. Not along strict accused-versus-prosecution lines. But along strict partisan, ideological lines. That is, precisely as one might expect liberal Democrats versus conservative Republicans to vote.

In the Padilla case, the criminal defendant was told by his attorney that there would be no immigration consequences to pleading guilty. The attorney was wrong, however. The defendant was actually subject to deportation. So was the defendant's constitutionally guaranteed right to the effective assistance of counsel violated? In practical terms, was he entitled to a do-over, or does he still get deported?
Now that is a fairly straight rights of the accused versus law and order problem. One might well expect liberals to side with the accused and conservatives with deportation. In terms of pure partisan politics, how might one expect Democrats and Republicans to vote?
Well, it turns out that the 4 more liberal Justices voted exactly as one would suppose. Do-over! An accused is entitled to be told correctly by his attorney what, if any, consequences a guilty plea will have on immigration status. Justices Stevens, Ginsburg, Breyer, and Sotomayor were joined in voting that the accused constitutional right to counsel was violated and that the violation had to be remedied.
The 4 more conservative Justices were split. To be precise, they were not split on everything. They all did disagree with the liberals. None of the conservatives believed that an accused is entitled to an attorney who advises him of the immigration consequences of a guilty plea. In short, if the attorney says absolutely nothing, that's fine. The unadvised accused gets deported, that's fine.

[No, I'm not kidding or exaggerating. According to all 4 of the more conservative Justices, a lawyer has no obligation to tell--and an accused client has no right to be told--that a guilty plea will get the client deported. Maybe I've gone soft, but that seems so fundamentally unfair. Well, I didn't vote for the presidents who appointed them. And if I were president--God forbid--I would not have appointed them. But that's entirely beside the point here.]

So, on that point, the 4 more conservative Justices agreed with each other. But 2 of them were somewhat more soft-hearted than the others. For those 2, yes, it's alright if the lawyer says nothing. Alright if he gives no advice at all about the immigration consequences of a guilty plea and his client get deported. But, if the lawyer does give advice, his advice better be accurate. That is, no advice is fine; inaccurate advice is not fine. A lawyer failing to advise his client that he could be deported does NOT violate the constitutional right to effective assistance of counsel. But a lawyer who does advise his client and mistakenly tells him that he won't get deported, that is a violation.
That Solomon-like--cut the accused rights in half--resolution was voted by Chief Justice Roberts and Justice Alito. But the other 2 conservatives, Justices Scalia and Thomas, stuck to the hard-line position. According to them, there's no right to counsel to be advised of the immigration consequences of a guilty plea. There's not even a right to counsel to be advised correctly if the lawyer does give advice. So for Scalia and Thomas: no advice is fine; inaccurate advice is fine too. Either way, there's no violation of the constitutional guarantee to the effective assistance of counsel.

Here's the voting breakdown pictorially. The 1st is for the proposition that the constitutional right to counsel includes the right to be told whether you'll be deported. 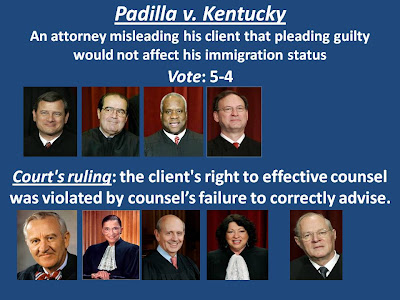 That doesn't seem a particularly remarkable proposition. But it still divided the Court. And it did so along strict ideological lines. The 4 liberal Justices plus Kennedy voted that there is such a right. The 4 conservatives voted no. (Again, Roberts and Alito voting no such right to be advised at all. Only a right not to be advised incorrectly.)

The 2d pictorial is for the proposition supported by Roberts and Alito, in addition to the liberals and Kennedy. That is, that the right to counsel includes not being told mistakenly that there's nothing to worry about, you won't be deported. 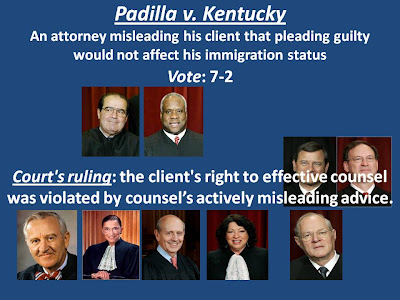 Well, that's just the 1st of last term's criminal law "highlights." The other 4 are just as important, fascinating [Well, I think so.], and revealing. We'll continue with those in the next post--sans hiatus.