Among the highlights of the Supreme Court's last term was a case involving a life-without-parole sentence for a crime committed by a minor. As with every other case discussed in this series, the Court was sharply divided.

In the last post, we began a closer look at the criminal law decisions among those "Top Ten" highlights. We discussed the Court's ruling, in Padilla v. Kentucky, about an accused's constitutional right to counsel. The Court held that the right was violated because the lawyer failed to tell his client that he would be deported if he pleaded guilty. In fact, the lawyer had assured the client that he wouldn't be. (See Supreme Court: Highlights...(Part 7), Dec. 14, 2010.)

The Court was split in that case along the expected liberal versus conservative lines, with Justice Kennedy siding with the liberals. On the conservative side, Chief Justice Roberts and Justice Alito took a position midway between the 2 ideological camps. They joined in a separate opinion, authored by Alito, to argue that the right to counsel is NOT violated when a lawyer simply fails to say anything about the deportation consequences. The right to counsel, in their view, is violated only when the lawyer does say something, but what he says is wrong. [Regardless of how I would have voted in that case, I'm not really sure how a client is better off with an attorney who is too incompetent to give any warning at all, as opposed to an attorney who tells him not too worry. In any event...]

Now for the case, Graham v. Florida, involving a life sentence for a juvenile crime. More specifically, it was a sentence of imprisonment for life, without any chance of release, for a crime, not involving homicide, that was committed when the defendant was 16 years old.
The Court in Graham, by a 5-4 vote, held that such a sentence was unconstitutionally cruel and unusual. In an opinion by Justice Kennedy--who again joined the 4 liberals (Justices Stevens, Ginsburg, Breyer, and Sotomayor)--the majority ruled that a life-without-parole sentence was impermissible because it allowed no possibility for the maturity and rehabilitation of the minor. 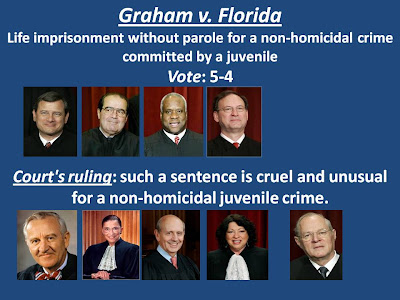 A life sentence for a minor is, in fact, more than merely longer than a life sentence imposed on an older defendant for the same crime. That sentence takes no account of the possibility that a minor could grow into a law-abiding citizen as an adult. For these reasons, the bare majority concluded that a sentence imposed for a juvenile crime--at least a non-homicidal one--must afford the opportunity of release for such a maturing, rehabilitative possibility.

In short, a life sentence without parole imposed for a crime--other than murder--committed by a juvenile is gratuitously cruel.

Well, that's the sum and substance of what the 5-Justice majority ruled. The remaining 4 did not agree.

But even more on point for the dissenters is that, in their view, very little violates the constitutional prohibition of cruel and unusual punishment. That is especially true for Thomas and Scalia. They have previously made absolutely clear their belief that the Constitution only prohibits the most barbaric, fiendish, and excruciating punishments.

In the 2008 case of Baze v. Rees (where the Court upheld lethal injection), Thomas was explicit in his opinion which was joined by Scalia. Precious few punishments even considered today would violate the Constitution. According to those two, only "burning at the stake, disemboweling, drawing and quartering, beheading, and the like" were originally considered "cruel and unusual." Hence, according to them, only those and similar punishments specifically "designed to inflict torture" are prohibited by the 8th Amendment. [This was previously discussed in Supreme Court's 2007-08 Term: The Defining Decisions (Part 2: Cultural Issues), Sept. 20, 2008.]

Well, whether that "original" meaning is accurate and, even if so, whether it should govern today may not be so clear to many. But to Thomas and Scalia it is clear. They answer both questions emphatically in the affirmative. Yep, only "burning at the stake, disemboweling, drawing and quartering, beheading, and the like" would violate the Constitution. [No, I'm not making this up or exaggerating.]

To be fair, at least Thomas and Scalia's view is pretty easy to apply. So, in the case of a juvenile being sentenced to life without parole? No problem at all. Not even an issue.

Their view is certainly more predictable and less dependent upon the Justices' own personal views than the approach taken by the majority. The majority's approach: weighing all the seemingly relevant factors and rendering a judgment based upon what seems to be most reasonable under the circumstances. That could be pretty messy. Certainly not very certain. Certainly subject to human error. Not a mechanistic application of some firm rule. BUT, it WOULD be "judging"--making judgments.

In any event, the majority in Graham made the judgment that affording a juvenile (non-homicidal) offender no opportunity to mature into a law-abiding citizen made no legitimate penological sense. Thomas, Scalia and Alito disagreed that such a sentence was constitutionally "cruel and unusual."

Chief Justice Roberts--as in the right to counsel case--took a middle position. 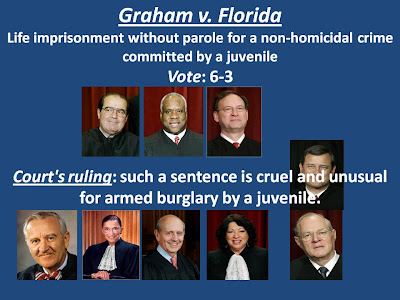 Roberts did not adopt the position of the dissenters that weighing the relevant factors and actually exercising a judgment was illegitimate and unworkable. And he certainly gave no indication that he agreed with the Thomas-Scalia position that only burning at the stake and disemboweling were unconstitutional.

Instead, Roberts' weighing of the factors and judging was even less certain and less mechanical than that of the majority. For him, the calculus was even more subtle. Some non-homicidal crimes committed by juveniles could justify life-without-parole; others would not. The particular crime itself, and what it and the juvenile's history say about him would have to be considered. E,g., when all is considered, is there any real possibility of rehabilitation or any requirement to consider that possibility?

In Graham, the defendant had committed an armed burglary when he was 16. To Roberts, there was no justification for denying that defendant any opportunity to demonstrate that he could be a law-abiding adult.

So, for life-without-parole under the specific facts of Graham, the Court was 6-3. For the general proposition, that no such sentence for a non-homicidal crime by a juvenile was permissible, the vote was 5-4.

In both cases, conservative Justices Scalia and Thomas found no violation of the constitutional rights of the accuseds. Of the remaining conservatives, Chief Justice Roberts, broke with his ideological allies and voted for the results reached by the liberals. But in both cases he did so in separate concurring opinions, declining to go as far as the liberals did. Splitting the difference between his liberal and the conservative colleagues each time. Justice Alito was with Roberts in Padilla, taking the midway position on the right to counsel. He was with Scalia and Thomas in Graham, taking the hard-line on the juvenile life sentence without parole.

In the next post will take a look at the Court's important decision involving interrogations--specifically, involving the Miranda rights of suspects being questioned in custody. The Court's decision changed the law and, consequently, will likely change how interrogations are conducted. Of course, the Court was sharply divided and.... Well, we'll leave that for that next post.