May the police continue to interrogate a suspect, for 3 hours, after reciting the Miranda warnings, but without first obtaining the suspect's waiver of the right to remain silent? That's the Thompkins case.

Previously, the Miranda safeguards were understood to mean that interrogation is not permitted unless a suspect voluntarily and knowingly waives the right to remain silent. (And that is exactly how the federal appeals court had ruled in this case.) But now, after the Supreme Court's decision in  Thompkins,  interrogation is permitted unless the suspect clearly invokes that right. The presumption of interrogation validity has been reversed.
In Thompkins, the defendant was arrested for murder and questioned in jail by police detectives for 3 hours. He was read the Miranda warnings, including: "You have the right to remain silent. Anything you say may and will be used against you in a court of law." The police asked him to sign the form saying he waived his rights. He refused.

Nevertheless, the police proceeded to question the defendant for 3 hours. He said virtually nothing in response. He answered only a few times, and then with a single word. At the end of the 3 hours, the police asked the defendant about his religion and, ultimately, if he prayed to God for forgiveness for the murder. To that, he answered "Yes."

That one-word response was used against the defendant at trial, and he was convicted. The federal appeals court, the 6th Circuit, reversed the conviction. That court ruled that the defendant's Miranda rights were violated because the police persisted in questioning him despite his refusal to waive those rights, and despite his continued silence for nearly 3 hours.

Stated otherwise, the police don't have to obtain a defendant's clear waiver--i.e., his agreement to forgo his right to silence and allow interrogation. Instead, the defendant must clearly invoke his rights--i.e., expressly say he wants to remain silent or actually remain silent throughout the questioning. 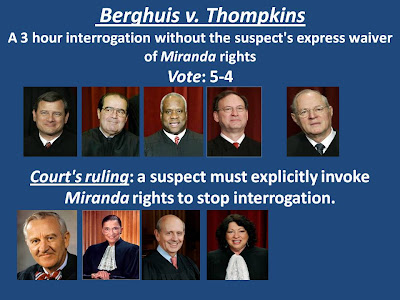 The majority, insisting that this dilution of the Miranda protections is consistent with the Court's previous decisions, not surprisingly included the Court's 4 conservative Justices--i.e., Chief Justice Roberts, and Justices Scalia, Thomas, and Alito.

Scalia and Thomas have repeatedly made clear that Miranda should simply be scrapped. Their argument is that Miranda is an illegitimately created judicial protection of a different, underlying constitutional protection--the 5th Amendment's privilege against compulsory incrimination. That Miranda does not protect against actual compulsion; rather, it protects against the stupidity of responding to police questions. That the 5th Amendment does not require protection against such stupidity, nor does anything else in the Constitution..

Roberts and Alito have not been on the Court long enough to have been engaged in previous major battles over Miranda. However, their voting records in other cases since they have been on the Court do make clear that they would not be ardent enforcers of  Miranda. For one thing, neither is particularly sympathetic to excluding evidence, regardless of the Constitutional right involved, except perhaps in the most egregious cases of police misconduct. Additionally, in close cases--and, regardless of the protestations of both sides, this is a close case--their pro-police, pro-conviction votes are virtually assured.

Those 4 were joined by Justice Kennedy. He wrote the majority's opinion. For him, the decisive point was that the Court had previously ruled that a defendant must clearly invoke his right to counsel if he wants a lawyer before answering questions. (Davis v. U.S., 1994.) Moreover, for Kennedy, there is no real hardship for a defendant. He simply has to say he wants to keep silent or that he doesn't want to talk to the police.

The dissenters, again not surprisingly, were the Court's 4 liberals--i.e., Justices Stevens, Ginsburg, Breyer, and Sotomayor. Stevens, Ginsburg and Breyer have been on the Court long enough to have track records. All are firm supporters of Miranda. All believe in the exclusion of evidence where the police have infringed upon a defendant's rights. All have voting records favoring the strong enforcement of the rights of the accused, as well as for broad interpretations of those rights.

As for Sotomayor, she was supposedly an unknown quantity when she joined the Court. [I never thought so. Her record at the 2d Circuit seemed plainly liberal in criminal cases to me. See the several posts on New York Court Watcher at the time of her nomination and confirmation. E.g., See Sotomayor--Let's Put the Cards on the Table (Some Common Threads in Her Opinions), June 5, 2009; (Versus Her Colleagues), June 3, 2009; (Ideological Patterns in Her Opinions), June 2, 2009; (First, Some Prefatory Comments), May 28, 2009.]

She authored the opinion for the dissenters, and she was clearly incensed by the majority's ruling. She accused the majority of turning Miranda on its head. Previously, the right to silence was presumed unless it was clearly waived. Now the right is presumed to be waived unless it is clearly invoked. A suspect must now break his silence in order to insure the right to be silent. He must speak in order to trigger his right not to speak. Interrogation may now proceed, despite the suspect's deliberate silence.

Whatever one thinks about the Miranda safeguards, the Court has diluted them in Thompkins. The right to remain silent will be triggered in fewer cases. Interrogations will be permitted in more cases. The Miranda protections to insure that confessions are truly voluntary, freely given, not induced by police misconduct have been trimmed. The Miranda insistence that the right to remain silent--like other fundamental rights--be considered waived only if shown to have been done so voluntarily, knowingly, and intelligently has certainly been muddled.

Yes, there are countervailing ways of viewing the merits of the Thompkins decision. It is clear that Thompkins has modified the Miranda interrogation safeguards. It is also clear that it provides weaker rights of the accused than would be the case had the dissenters prevailed. But it is not so clear that the modification has altered any fundamental constitutional (i.e., 5th Amendment) rights of the accused. Nor is it so clear that it has increased the likelihood of actual  constitutional violations (i.e., actually forced confessions).

But what is also clear is the Court's ideological divide. In Thompkins, as in each of the criminal cases discussed in previous posts--dealing with the right to counsel and cruel and unusual punishment--all 4 liberal Justices sided with the criminal defendant and voted for enhanced protection of rights of the rights of the accused.

And in all of the cases, Justice Kennedy cast the deciding 5th vote. In 2 with the liberals (right to counsel and cruel and unusual punishment). In 1, he was with the conservatives (Miranda).

There are 2 additional criminal cases among the "Top Ten" highlights of last term. One involving the federal "honest services" fraud statute; the other involving gun control laws. Curiously, although not too surprisingly, there's a bit of a switch in these cases in who favors law enforcement and who favors individual rights. Again, think politically, think ideologically. We'll take a look at these 2 cases next.