Roberts in the Middle: The Chief Justice as Moderate (Part 1--Intro) 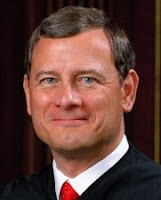 Everyone now knows what he did with Obamacare:
Agreed with the conservatives that the federal government had exceeded its interstate commerce power.
But sided with the liberals that the law could--and should--be viewed as valid under the taxing power.

He gave each side a victory:
A huge legal victory for conservatives by restraining the commerce power, which they dread.
A huge political one for the liberals by upholding the law, albeit on a very questionable legal basis.

This was not the first time Chief Justice John Roberts departed, at least partially, from the conservative wing of his Court.

Roberts hasn't done this too frequently. Not regularly. But not rarely either.

This moderating aspect of Roberts' jurisprudence, this occasional splitting of differences and even siding with the liberals, is one characteristic of his voting and opinions that has emerged over the years. It is one of the reasons why Roberts' vote and opinion in the Obamacare case were not nearly as surprising as much of the reaction would suggest.

Now before getting carried away, the point here is not to suggest that the Chief Justice has exhibited liberal leanings. Or even that his voting shows him to be a centrist.

Nor does his record suggest that he has replaced Justice Kennedy as the Court's swing vote. Or even that he is becoming less conservative.

We will look at several examples in the next couple of posts. They will follow shortly.