[Well...I, and a few others, believed that Chief Justice Roberts would want to avoid a 5-4 straight party line vote on Obamacare. And he did just that.
But now, lots of folks, including some who should know better, are claiming that the Obamacare decision shows that Roberts and his Court are not really as political as...well, as political as they really are.
So, one more installment of "Shameless Partisans."]

The Chief Justice was strategically brilliant in the Obamacare decision. On several levels.
Constitutionally: Roberts--with the votes of the 4 other Republicans on the Court--restricted the interstate commerce power of the federal government. A huge victory for Republicans and conservatives.

Politically: He--with the votes of the 4 Democrats on the Court--upheld Obamacare (under a curious application of the the fed's taxing power). A huge victory for Democrats and liberals.
Judicially: He showed that his Court--especially he--does not simply decide cases like political partisans or ideologues.

And yes, as to that last one, he seems to have succeeded in persuading lots of people. Including, as I've already mentioned, commentators and supposed experts who really ought to know better.
[Yes Gramps, the world's a fake.]

So let's return to reality. Not contrivance, wishful thinking, or politically or partisan-motivated nonsense. Let's look at the actual record.

Here are some voting figures we've seen previously in this series. But here they are in graphs highlighting the divide between the 4 liberal/Democratic Justices and the 4 conservative/Republicans. Take a look.
(click to enlarge)
GRAPH 1 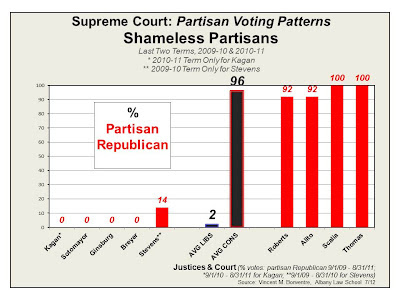 And the flipside of the same figures--just in case some of you prefer the perspective from the Democratic angle. 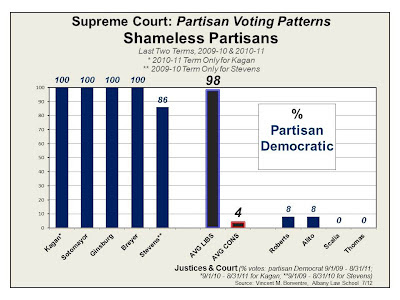 Yes, that's the divide--nearly 100%--in the highly partisan-charged cases involving guns, religion, gays, campaign finance, immigration, and other issues in which there is a deep divide among Democratic and Republican politicians.

The lib-Dem Justices voted like Democratic politicians 98% of the time. The con-Repub Justices voted like Republican politicians 96% of the time. And all of these 8 Justices just happened to interpret the law to coincide with their respective partisan politics?
[Justice Kennedy, the swing voter, is not included in either camp and has been excluded from these graphs for clarity.]

Now what about the Justices' voting records in that larger pool of generally ideologically-laden cases? Not just those super-charged cases. But all of those where there's a clear politically liberal versus politically conservative side of the issue. Cases generally involving rights of the accused, consumer or worker interests versus business, discrimination claims by minorities and women, environmental issues, etc.

Yes, just in case those extremely partisan-charged cases skew the results. What does the disparity look like in that larger pool of cases? 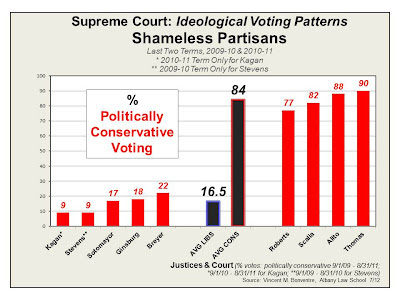 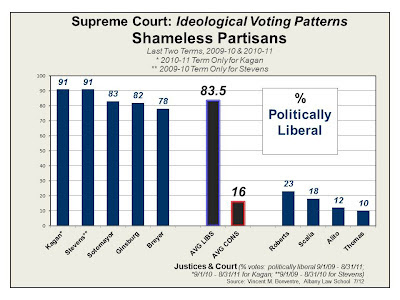 Even in this larger number of cases, these less-charged cases, the divide between the Justices is enormous. 68 percentage point difference between the 4 lib-Dem and con-Repub Justices. Stated otherwise, the 4 con-Repub Justices voted for the politically (not judicially) conservative position more than 5 times as often as the lib-Dem Justices. And the lib-Dems voted for the politically (not judicially) liberal position more than 5 times as frequently as the con-Repubs did.

Oh, and as reflected in the figures and the graphs, Chief Justice Roberts' voting record in the highly-partisan cases was 90 percentage points different from that of the average for the lib-Dem Justices. It was 92% partisan Republican. And even in the larger pool of cases, his voting record was 60 percentage points different than the average for the lib-Dems. It was 77% poltically conservative.

Chief Justice Roberts might have given it the good old college try in the Obamacare case. He might even have changed (fooled?) some minds about how partisan and ideological he and his Court have actually been. But no matter how savvy and strategic and successful he might have been, he can't erase the reality of the record--his own or his Court's.

Maybe the Obamacare case is the start of a less partisan Roberts and less partisan Court. Maybe. But the record that Roberts and his Court have amassed thus far--both the liberal and conservative Justices-- is a shameful one of shameless partisanship.


In the next post, in the interest of full disclosure, I'll disclose what my own voting record would have been in the cases examined for this series of posts.