We looked at Sotomayor's record when she was nominated and being confirmed for the Supreme Court.
We looked at her voting and her opinions as a federal appeals judge.

Of course, what both the Republicans and the Democrats were saying was pure nonsense.
And what she was saying was at least as preposterous.

We discussed all of that on New York Court Watcher in a series of posts. Among other things, we examined Sotomayor's record on the 2d Circuit Court of Appeals. It was pretty revealing. Indeed, it was pretty plain for anyone willing to take a look.

And for anyone who bothered to take a look--or simply to read the discussions and look at the graphs on New York Court Watcher!--there would be no surprise with what Sotomayor's record on the Supreme Court would be.

Her record was one of a political, ideological liberal, and, of course, she voted to make law and policy just as every appellate judge does.

So let's look at Sotomayor's record at the Supreme Court. Just as we have for the other members of the Court we've already focused on in this series.

As I've previously suggested: no surprise.

Here's what her record looks like in those highly partisan-charged cases. 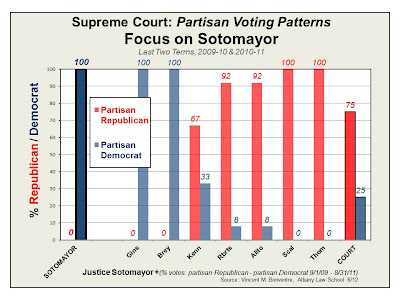 100% partisan. Sotomayor voted in every one of the highly partisan cases like a liberal Democratic politician.

So, for example, against gun ownership being a fundamental right, against the display of a Christian cross on government land, against state enforcement of immigration restrictions, for federal and state restrictions on campaign finance, and for state enforcement of equal rights for gays and lesbians. Yes, as perfectly partisan as the records of liberal Justices Ginsburg and Breyer, and conservative Justices Scalia and Thomas. 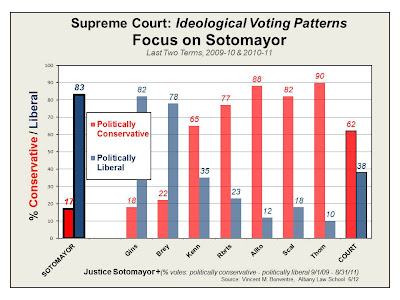 83% voting like a political liberal. As ideologically slanted as the records of liberal Justice Ginsburg and conservative Justice Scalia. In fact, although Thomas's and Alito's voting may be THE the most ideologically lopsided on the Court, their records are just slightly more conservative than hers is liberal.

Sotomayor did vote with the conservatives in a few cases. For example, she voted with them to invalidate a state law that interfered with the marketing of prescription drug records, and to approve a method for calculating good time credit that is less favorable to inmates than an alternative method would be.

Overall, she has been a reliable, politically liberal vote on the Court.

What about activism versus restraint? 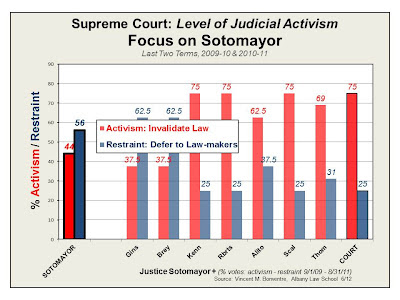 Like the other liberal Justices, Sotomayor's voting was more restrained than activist. Before drawing any general conclusions about liberals being judicial restraintists and conservatives judicial activists, however, we must consider the nature of the laws at issue.

As noted earlier in this series, most of the laws at issue were ones that political liberals would favor. They were laws that politically liberal judges would prefer to uphold. Hence, the restraintist voting records of the liberal Justices seem merely to comport with the ideological preferences of those Justices. Not any preference for judicial restraint per se. And vice-versa for the conservative Justices.

She strayed from the liberal Justices in one case. She voted with the conservatives to invalidate a state law that restricted the collection of drug prescription data by marketers.

Now for the cumulative (and definitely crowded at this point) graphs. 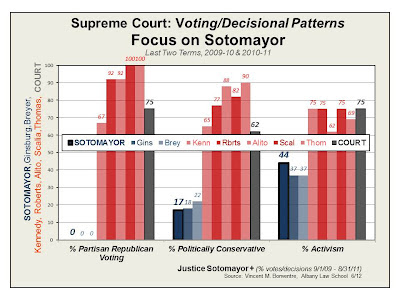 0% Republican and 17% conservative voting. No Justice's record is less like a Republican politician or an ideological conservative than Sotomayor's. As for activism, her 44% record made her much less activist than any of the conservative Justices--i.e., she voted to invalidate fewer laws than they did.

Flipping the partisan and ideological figures: 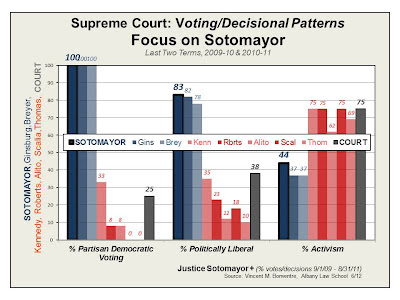 100% voting like a Democratic politician and 83% overall like a political liberal. Sotomayor's record in the highly charged cases is utterly partisan, and in the cases generally is highly ideological.