Neutral, non-partisan, non-ideological, disinterested, detached, moderate, and leaving policy up to the other 2 branches.
Just like the rest of the Justices.

Which means not really, not much, maybe not at all.

Justice Kagan was a member of the Court for only the latter of the two terms examined for this series of posts. But even after just one term, there is little that's ambiguous about her record. At least with regard to the partisan and ideological character of her voting.
[For earlier discussions on New York Court Watcher about Justice Kagan and her confirmation hearings, see
http://www.newyorkcourtwatcher.com/search/label/Kagan_Elena]

So, what does Kagan's record look like for that one year--her first year on the Court? Let's begin, as usual, with those highly partisan-charged cases. 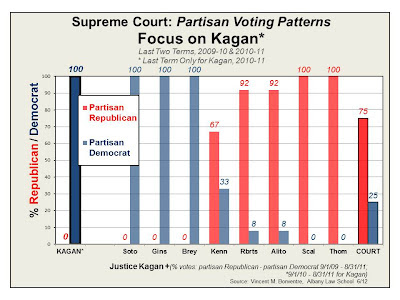 Remember, Justice Kagan was on the Court for only one of the two years reflected in this graph. So the data for her represents her voting in that one year, Fall 2010 through Summer 2011 (i.e., the "October 2010 Term").

Five of the twelve highly partisan-charged cases we've been considering in this series were decided in that year. Kagan participated in 4 of them. She voted in all 4 the way a Democratic politician towing the party line would be expected to vote.

She voted to allow a class action against Walmart for sex discrimination, and to allow a challenge to Arizona's tuition tax credits for students attending religious schools. She voted to uphold Arizona's campaign finance regulations, and to uphold a lower court's order that California reduce overcrowding in its prisons.

In the more generally ideologically-laden cases, her voting was similarly one-sided. Here it is. 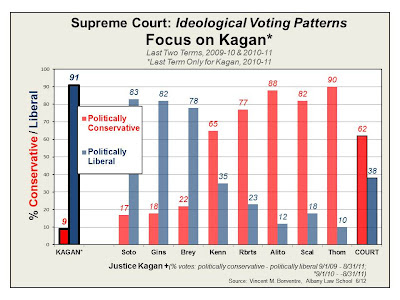 91% voting like a political liberal. No Justice on the Court has a record that is more ideologically lopsided. (Not that others aren't similarly lopsided in their voting.)

Of the total of 60 ideologically-laden cases decided over the course of the 2 years, 28 were decided in the latter year when Kagan was on the Court. She participated in 22 of those cases. In 20 of the 22, she took the same position that a political liberal would take.

Stated otherwise, she voted like a political liberal--like a liberal politician would--in all but 2 of those cases.

In those 2 cases, she sided with the conservative Justices and law enforcement. She voted to reject the retroactive application of a recent Supreme Court decision that protected drivers against warrantless searches of their automobiles. She also voted to allow warrantless searches in emergency situations that are triggered by lawful actions of the police.

Other than those 2 cases, she consistently took the politically liberal position. E.g., consistently siding with the rights of the accused, with government regulation of business, with workers, and with consumers.

How activist and how restrained? 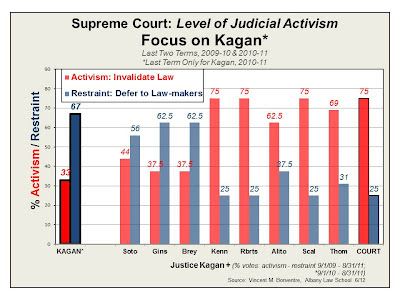 On the other hand, she sided with the challenge to Arizona's tax credits for students attending religious schools, and she voted to invalidate California's law against selling violent video games to minors.

So 4 restrained votes. 2 activist ones. All politically liberal.

Let's put it all together. 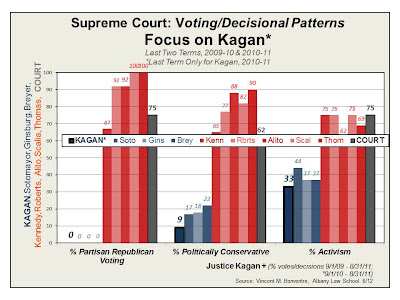 Kagan's record, for her rookie year on the Court, was near perfect. That is, for a partisan Democrat and a political liberal. She cast no votes in the highly-charged cases that a partisan Republican politician would, and, in the larger pool of cases, she voted a mere 9% like a political conservative.

She only voted like an activist--i.e., to overrule the judgments of the other branches or the states--33% of the time. But, then again, her record on that score merely reflects the politically conservative versus politically liberal divide of the laws at issue--voting to invalidate the former and to uphold the latter. 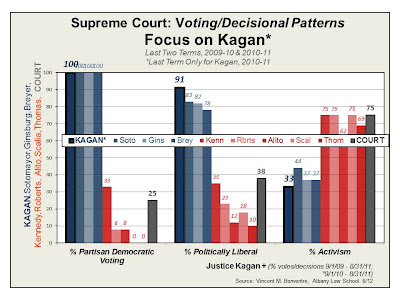 So, to recap Justice Kagan's record for her first year on the Court:
Partisan: 4 out of 4 like a partisan Democratic politician.
Ideological: extremely like a political liberal.
Activist: not so much, because most of the laws at issue were politically liberal.


Next post: a very quick look at retired Justice Stevens, Kagan's immediate predecessor, who was on the Court for the 1st of the 2 years studied for this series.