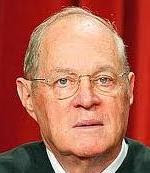 Well, what about Justice Kennedy?
The widely recognized "swing vote" on the Court.
How partisan? Ideological? Activist?

In part 1 of this series, we took a look at Justice Antonin Scalia. In short: very partisan, very ideological, and a vigorous judicial activist.
(See Supreme Court: How Partisan? Ideological? Activist? (Part 1: Focus on Scalia) --with graphs!, MAY 1, 2012.)

Now let's turn to the next most senior member of the Court--i.e., next longest serving Justice. The other remaining appointee of President Ronald Reagan. Anthony Kennedy. We'll do so using the same research and applying it to the same sort of graphs we did with Scalia in part 1.


[As stated in part 1, the several posts to appear in this series are based on my research over the past few weeks. The pool of cases on which my findings are based is explained at the end of today's post.]

Take a look. How frequently did Kennedy vote like a conservative Republican politician would have? And how frequently like a liberal Democratic politician? Here it is. 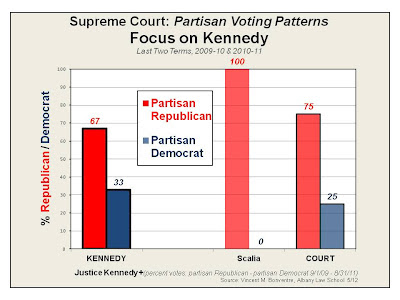 Kennedy's voting is certainly more like that of a conservative Republican than like a liberal Democrat. Indeed twice more.

But his record does not indicate the kind of hyper-partisanship that is evident in Scalia's voting. Kennedy actually did vote for some results that would be favored by liberal Democratic politicians.


That fact is particularly significant given the clear, highly partisan-charged, opposing positions on the issues involved in this subcategory of cases. Those cases where there would be an especially strong and deep divide between conservative Republican and liberal Democratic politicians. [I.e., the 12 cases we discussed in more detail in part 1, and whose description is repeated at the end of this post.]

Unlike Scalia, Kennedy took positions in several of those cases clearly contrary to that of a conservative Republican politician. For example, he sided with the liberal Justices in finding prison overcrowding in California to be unconstitutional and requiring alleviation.

He also voted in favor of a state university that refused to fund a student Christian group that denied membership to gays and lesbians. And he sided with an immigrant whose criminal defense lawyer failed to advise him of the risks of deportation.

Notably, Kennedy's votes gave the liberal Justices a majority for the positions they took in those highly charged cases. He more frequently voted with the conservative Justices. But unlike Scalia, he sometimes did support positions that would be opposed by conservative politicians.

Let's now look at Kennedy's voting over that larger body of cases dealing generally with ideologically-laden issues. Not only those with the most highly charged, politically partisan issues. But all of those involving issues with fairly clear, opposing ideological sides. [I.e., the 60 cases we discussed in more detail in part 1, and whose description is repeated at the end of this post. 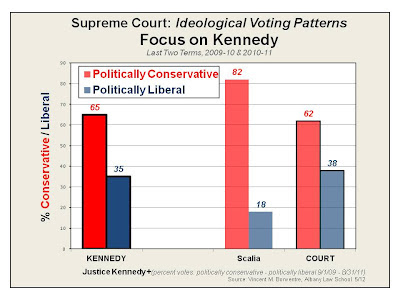 Indeed, he and the Court broke from their more typically conservative stances in many of the same cases. For example, he and the Court adopted the position that a juvenile's vulnerability should be considered in determining the necessary Miranda protections. He and the Court also favored an equitable reduction of sentencing for crack-cocaine crimes vis-a-vis that for crimes involving cocaine-powder.

He and the Court were also together in requiring counsel for indigents faced with civil contempt; for denying retroactive application of federal sex-offender registry requirements; and for invalidating life sentences without parole for juveniles guilty of non-homicidal crimes.

By contrast, Scalia was on the other side of the issue in all those cases except the one dealing with sex-offender registration. 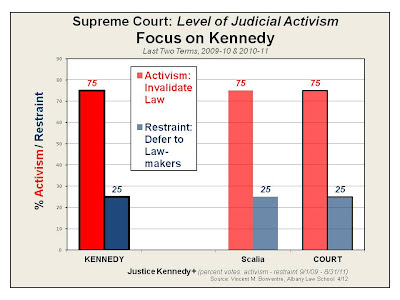 Kennedy's record is identical to that of Scalia and the Court as a whole. He voted to invalidate twice as frequently as he voted to defer.

In fact, Kennedy's specific activism-restraint votes are the same as Scalia's with the exception of 2 cases. Where Kennedy voted to invalidate the state law allowing life without parole sentences for juveniles, Scalia voted to uphold it. Where Kennedy voted to uphold a state university rule denying funding to student groups--including religious ones--that discriminated against gays and lesbians, Scalia voted to override it. 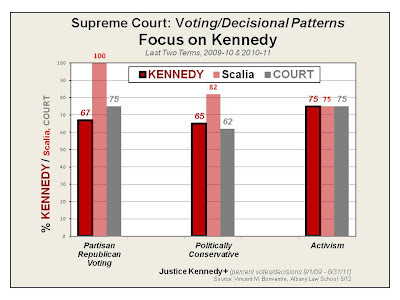 In the next post we'll look at the next most senior member of the Court, Justice Thomas.


[Let me again explain the cases included in this study.

Every decision of the Court over the last 2 completed terms was reviewed. That's the 2 annual terms of Court: Fall 2009 to Spring 2010 term, and Fall 2010 to Spring 2011.
Without considering how the Court decided those cases, and without considering how the individual Justices voted, all the cases with issues having fairly clearly opposing ideological sides were identified. That is, cases in which there was a pretty clear ideological divide along politically conservative versus politically liberal lines. These are the cases that involved such issues as those pitting law enforcement and crime control  versus rights of the accused, business versus workers, management versus labor, business versus safety or health or environmental or nondiscrimination regulations, socially traditional values versus socially progressive ones, the interests of the majority or the wealthy versus those of the minority and the poor, religion versus secularism, etc. There were 60 such cases.
Then (again without considering how the Court decided those cases or how the individual Justices voted), cases with the most highly charged, politically partisan issues were identified. That is, cases with issues on which there are very clearly opposing partisan positions. Cases having a clear, strong, even bitter and deep divide between Republican politicians, especially conservative ones, and Democratic politicians, especially liberal ones. These are the cases with issues such as the separation of church and state, immigration policy, campaign finance laws, gun control, and gay rights. There were 12 such cases.
Finally,(once again without considering how the Court decided those cases or how the individual Justices voted), those cases where the validity of federal or state laws were at issue were identified. The particular partisan or ideological character of the laws was not considered. Indeed, the laws at issue in these cases ranged the partisan and ideological gamut: from gun control, gay rights, and campaign finance to immigration control, aid for religious schools, and criminal sentencing. There were 16 such cases.]