Just how partisan is the Court?
And more specifically, each Justice?

[The several posts to appear in this series are based on my research over the past few weeks. The pool of cases on which my findings are based is explained at the end of today's post.]

First, let's consider GRAPH 1.
In in recent years, how did Justice Antonin Scalia vote when there was a clear, strong, politically partisan divide? That is, how did he vote in cases where there was a clear and strong divide on how conservative Republican politicians and liberal Democratic politicians would vote? Cases dealing with highly charged political issues such as immigration, campaign finance restrictions, gun rights, and government aid for religious schools.
Just how frequently did Scalia vote for the position that would be taken by a conservative Republican politician? By a liberal Democratic politician? 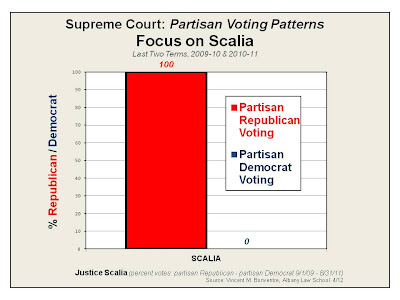 Yes, Scalia's record is that stark. It is that one-sided.
[Again, the pool of cases selected for this study, including the narrower pool of 12 reflected in Graph 1, is more fully described at the end of this post.]

Let me be blunt, in every one of those highly political cases, he just happened to interpret the Constitution or some federal law in a way that supported the result that a conservative Republican politician would favor. Hmm.

Before discussing other findings, together with the related graphs, allow me a few prefatory words.

Many, if not most Court watchers, think that the Court today is extremely partisan. That the Court is deeply divided along politically partisan lines. Others who generally follow politics seem to share that belief.

Now with "Obamacare" before the Court, there is widespread concern that the Justices may simply vote along party lines. This concern is not just about the survival or death of Obamacare. It is about the respect and integrity of the Court itself. Will the Court again earn the contempt it did with its decision--especially the Justices' respective voting--in Bush v. Gore?

[Now come on, forget about the outcome--whether you agree with the final result in Bush v. Gore or not. Just consider that the conservative Justices just happened to interpret the Constitution in such a way that sided with Bush, and the liberal Justices just happened to do so in a way that sided with Gore. Really! What are the odds of that happening if the 9 Justices were all honest, neutral, objective? Come on! We're talking EXTREMELY remote. The Justices' voting was along purely partisan lines. The Court's reputation took a major hit, and the Court deserved it.]

So let's take a look at the current Court. Just how partisan are the Justices? How ideological? And how activist?

To find out, let's look at the Justices' actual votes. Not what they say in their opinions or what their respective supporters and fans might claim. But how they actually are voting in the cases before them. You know: let's connect the dots.

The focus in this post is on Scalia. We'll get to all the Justices in posts that follow. But Scalia is the most colorful, the senior Justice (i.e., the one on the Court the longest), and perhaps the most controversial on the Court. He seems like a particularly interesting one to start with.

As depicted in Graph 1 above, Scalia's voting could hardly be more partisan. That's certainly true for those highly charged issues where the partisan divide--i.e., the politically partisan divide--is strong and clear. He voted in his judicial capacity exactly the way we'd expect a conservative Republican senator or congressperson or other conservative Republican politician to vote.

The Court itself has been pretty conservative too. The Court's decisions--i.e., the majority votes--in the same highly political cases show that the Court as an institution has mostly been adopting positions that conservative Republican politicians would favor. That's not too surprising to Court watchers either.

Take a look at this next graph. It depicts the Court's decisional pattern alongside Scalia's voting. 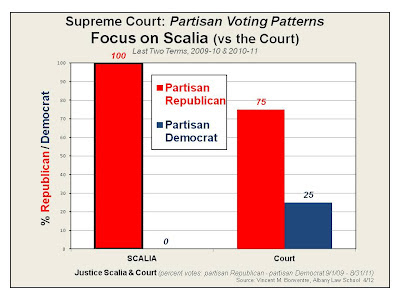 Hardly a balance. Strongly tilted in one partisan direction. But even so, not as lopsidedly partisan as Scalia's record.

Yes, other Court watchers might have added a few cases to the pool. They might have subtracted others. But no tinkering would change the ultimate finding: the voting record of Justice Scalia closely conforms--as in extremely so--to the positions of conservative Republican politicians.

Now what about a larger pool of cases? A pool of cases which might not be as highly charged, but which nevertheless do involve ideologically laden issues. Cases where the generally conservative versus generally liberal positions are fairly clear. You know, law and order versus rights of the accused, business interests versus government regulations, management versus labor, the interests of the majority or the wealthy versus those of the minority and the poor, etc.

So what is Scalia's record in this larger pool of [60] cases. And compared to the record of the Court as a whole?
GRAPH 3 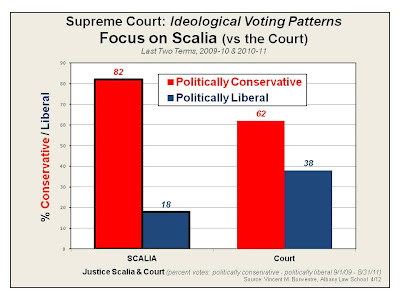 In that larger, less highly charged pool of cases, Scalia's record is still quite lopsided. In his capacity as a judge, he voted more than 80% of the time for the politically conservative position.

The Court itself rendered politically conservative decisions in more than 60% of these cases. Although the Court today unquestionably falls on the conservative side of the political spectrum, its record is not as lopsidedly conservative as Scalia's. It will be interesting to see--as we will in forthcoming posts--where the other conservative Justices fall along (or outside) the Scalia-Court continuum.

But before we get to other Justices and to the next post, let's take a look at how judicially restrained, or judicially activist, Scalia has been.

Well, what is Scalia's record on this.

The most fundamental principle of judicial restraint is for a judge to uphold what the other 2 branches of the government have done, unless what they have done is clearly unconstitutional. So, for a Supreme Court Justice (or the Court itself), judicial restraint means to invalidate the actions of the Legislative and Executive Branches and the states only when some constitutional mandate or prohibition has clearly been violated. In other words, judicial restraint means deferring to the choices of the other branches and the states except for unquestionable violations of the Constitution. 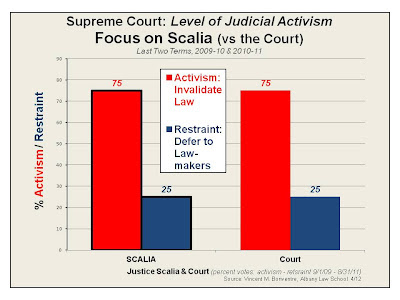 Well, not very restrained at all!

Before closing, let's combine all the findings above into one (hopefully-not-too-confusing) graph. 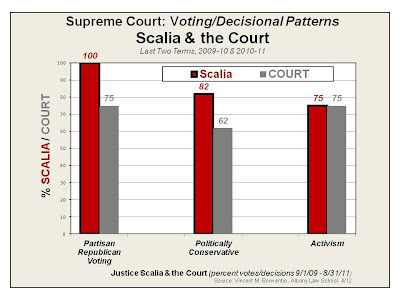 Scalia and the Court. Both with strongly partisan (Republican) and ideological (politically conservative) records--Scalia's record being even more so than the Court's. And both with unmistakably (and equally) judicial activist records.

There's little subtlety in these records. There's none in Scalia's. Certainly not on his partisan and ideological bent.

Even without Scalia's silly question about broccoli during oral arguments in the Obamacare case [Can the federal government require us to buy broccoli?], it would be pretty clear how he likely would be leaning on the law's validity. How would a conservative Republican politician vote? How would an ideological conservative vote? And either of those with no reluctance to be activist and invalidate laws?

So, in answer to the questions posed in the title to this post:
How partisan Scalia? Very.
How ideological? Very.
How activist? Very.

In the next post we'll take a look at the next most senior (longest serving) member of the Court, Justice Kennedy.


[Let me now explain the cases included in this study.

Every decision of the Court over the last 2 completed terms was reviewed. That's the 2 annual terms of Court: Fall 2009 to Spring 2010 term, and Fall 2010 to Spring 2011.
Without considering how the Court decided those cases, and without considering how the individual Justices voted, all the cases with issues having fairly clearly opposing ideological sides were identified. That is, cases in which there was a pretty clear ideological divide along politically conservative versus politically liberal lines. These are the cases that involved such issues as those pitting law enforcement and crime control  versus rights of the accused, business versus workers, management versus labor, business versus safety or health or environmental or nondiscrimination regulations, socially traditional values versus socially progressive ones, the interests of the majority or the wealthy versus those of the minority and the poor, religion versus secularism, etc. There were 60 such cases.
Then (again without considering how the Court decided those cases or how the individual Justices voted), cases with the most highly charged, politically partisan issues were identified. That is, cases with issues on which there are very clearly opposing partisan positions. Cases having a clear, strong, even bitter and deep divide between Republican politicians, especially conservative ones, and Democratic politicians, especially liberal ones. These are the cases with issues such as the separation of church and state, immigration policy, campaign finance laws, gun control, and gay rights. There were 12 such cases.
Finally,(once again without considering how the Court decided those cases or how the individual Justices voted), those cases where the validity of federal or state laws were at issue were identified. The particular partisan or ideological character of the laws was not considered. Indeed, the laws at issue in these cases ranged the partisan and ideological gamut: from gun control, gay rights, and campaign finance to immigration control, aid for religious schools, and criminal sentencing. There were 16 such cases.]