NY Court of Appeals: The Dissenting Dynamics Continue Under Lippman (part 2--Who's dissenting?)


Let's begin with a graph. It's actually a reorganized version of the 2nd graph from the last post. Take a look. 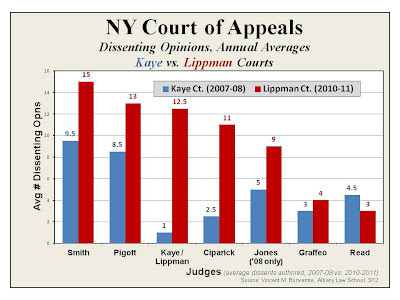 Yes, it's clear and stark. The contrast between the Court today under Lippman and the Court under Kaye. Also, the wide range of dissenting frequency among the Court's current members. 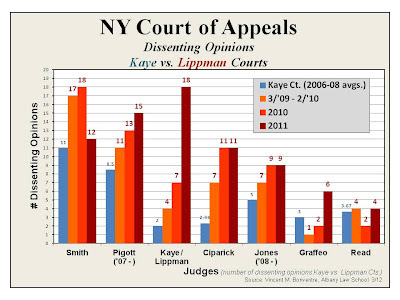 As we discussed previously, both in the last post and in posts shortly following Jonathan Lippman's appointment as Chief Judge, dissents have increased dramatically at New York's highest court. Whereas Chief Judge Judith Kaye sought unanimity and disfavored divided decisions, Lippman has made clear that he differs with his predecessor on that matter.

Indeed, such dynamics avoid the Court's glossing over or concealing differences of opinion. They result in clearer, sharper Court rulings. And such dynamics allow the Court to render bolder rulings that directly address and resolve the difficult, controversial issues that often confront the Court.

[As I have previously acknowledged, I agree with Chief Judge Lippman. And yes, I feel bad publicly disagreeing with Chief Judge Kaye because I am very fond of her. But on this matter I do disagree.
Also, I should admit that my views on this matter are surely influenced by my experience as a law clerk at the Court of Appeals for Judges Matthew Jasen and then Stewart Hancock, neither of whom was particularly reluctant to dissent. Indeed, one of them was quite disdainful when the majority tried to "paper over" differences of opinion. My co-clerk for Judge Jasen recently reminded me that our Judge used to say that.]

In any event, any attempt to "paper over" differences of opinion on the current Court of Appeals has certainly diminished.

Again, look at this graph that we saw in the last post: 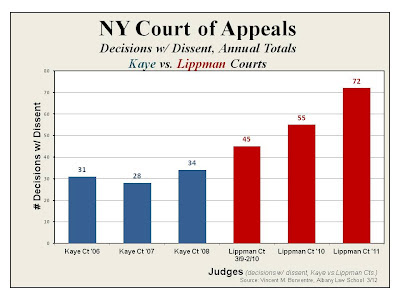 And the dissenters in the Lippman Court? Unmistakable as well. The annual average dissents authored by each Judge over the past 2 calendar years--and their total dissents? (Obviously, the exact same spread, but with different numbers.) Here they are: 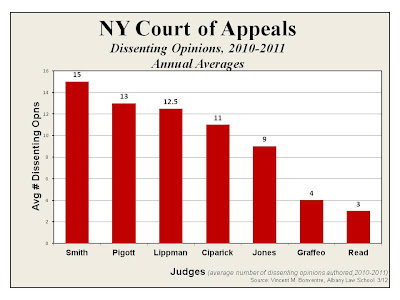 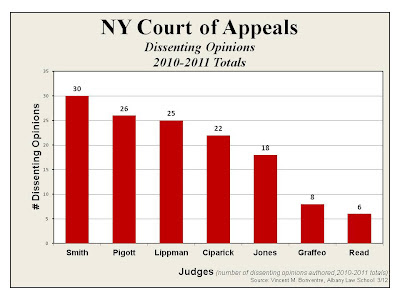 Examining these two graphs together with Graph 2 above makes a couple of things pretty evident. Judges Robert Smith and Eugene Pigott, as well as Chief Judge Lippman himself, are the Court's prolific dissenters. On the other hand, Judges Victoria Graffeo and Susan Read author the least dissents.

All of this, and more, makes this a most fascinating Court to study.


In the next few posts, we'll look at partisan voting patterns on the U.S. Supreme Court. The voting in Bush v. Gore was strictly along conservative versus liberal lines. In Citizens United, the same thing. Now looking ahead to the voting on "Obamacare," will it be conservative Justices versus liberal Justices? The Republicans versus the Conservatives? Do the Justices' records suggest that their votes will simply be partisan?
We'll take a look at how ideological, and how partisan, the voting of the Justices has been at the Court under Chief Justice Roberts.
We did this last year. (See Supreme Court: Highlights...(Part 13--Partisanship?: GRAPHIC Recap of All), Jan. 29, 2011.) We'll now update and take a broader look.