In previous posts, we looked at the voting patterns of Justices Scalia and Kennedy. We also compared them to each other, as well as to the decisional patterns of the Court as a whole.

Now let's take a look at Justice Clarence Thomas's record.
[As stated in part 1, the several posts to appear in this series are based on my research over the past few weeks. The pool of cases on which my findings are based is again explained at the end of today's post.]

We'll again begin our look with those cases that dealt with the very highly partisan-charged issues. 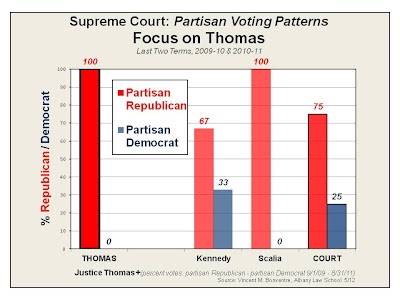 
What about that larger body of generally ideologically-laden cases? What does Thomas's record look like on those? 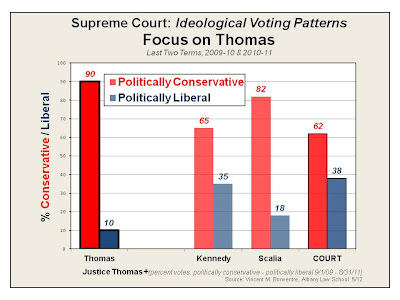 As would be expected by anyone who follows the Court, or even politics more generally, Thomas's voting record is very conservative--politically that is, not necessarily in the sense of judicial restraint. (More on that shortly.) In fact, he voted for the politically conservative position 9 times more than the liberal one. More frequently--reliably if one favors those positions--than even Scalia.

On the other hand, there were a few cases in which Thomas did join the Court's liberals. That included one which placed him on the side opposite Scalia. In that case, he voted with the majority to construe a federal statute in a way that supported an injured worker's claim against his negligent employer, a railroad.

Lastly, on the scale of activism and restraint, Thomas's record is much the same as that of Scalia and of the Court itself. To be precise, his record was slightly less activist in the pool of cases studied.

Take a look at his record in this regard as compared to Scalia's, Kennedy's, and that of the Court as a whole. 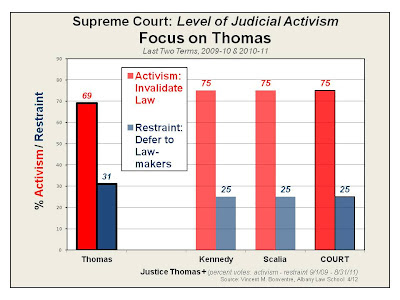 Thomas voted to strike most of the same laws that Scalia did. He also voted to uphold the same few as did Scalia.

The difference in their records on this point was Thomas's vote in a case about a California law that prohibited the sale of violent video games to minors. The Court's majority, including Scalia, threw the law out on free speech grounds. In dissent, Thomas voted to uphold the law.

Regardless of this one difference with Scalia in the activist-restraint cases, Thomas still voted to invalidate twice as many laws as he voted to uphold.

We conclude this post, as we have the previous ones in this series, by putting all the foregoing together in a single graph. Hopefully, it's not too cluttered to be worthwhile.
(click to enlarge)
GRAPH 4 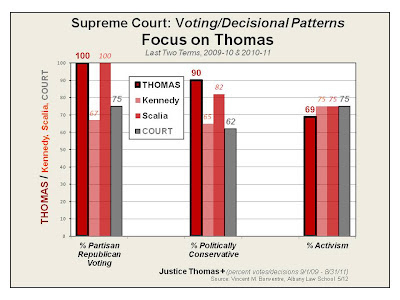 In the next post, we'll look at the next longest-serving member of the Court--and the first liberal in this series--Justice Ginsburg.

[As in the previous posts in this series, here's an explanation of the cases included in this study.
Every decision of the Court over the last 2 completed terms was reviewed. That's the 2 annual terms of Court: Fall 2009 to Spring 2010 term, and Fall 2010 to Spring 2011.
Without considering how the Court decided those cases, and without considering how the individual Justices voted, all the cases with issues having fairly clearly opposing ideological sides were identified. That is, cases in which there was a pretty clear ideological divide along politically conservative versus politically liberal lines. These are the cases that involved such issues as those pitting law enforcement and crime control  versus rights of the accused, business versus workers, management versus labor, business versus safety or health or environmental or nondiscrimination regulations, socially traditional values versus socially progressive ones, the interests of the majority or the wealthy versus those of the minority and the poor, religion versus secularism, etc. There were 60 such cases.
Then (again without considering how the Court decided those cases or how the individual Justices voted), cases with the most highly charged, politically partisan issues were identified. That is, cases with issues on which there are very clearly opposing partisan positions. Cases having a clear, strong, even bitter and deep divide between Republican politicians, especially conservative ones, and Democratic politicians, especially liberal ones. These are the cases with issues such as the separation of church and state, immigration policy, campaign finance laws, gun control, and gay rights. There were 12 such cases.
Finally,(once again without considering how the Court decided those cases or how the individual Justices voted), those cases where the validity of federal or state laws were at issue were identified. The particular partisan or ideological character of the laws was not considered. Indeed, the laws at issue in these cases ranged the partisan and ideological gamut: from gun control, gay rights, and campaign finance to immigration control, aid for religious schools, and criminal sentencing. There were 16 such cases.]