And now for Justice Ruth Bader Ginsburg.
The same questions.
Her record: how partisan? ideological? activist?

As with Justices Scalia and Thomas in previous posts in this series, the questions are not about whether, or how much, you--or I--might happen to like the results Ginsburg supported with her votes. [This is mostly directed to my dear liberal friends.] The questions are not about whether you--or I--might prefer the liberal positions she usually takes to the conservative ones that Scalia and Thomas usually do.

No.
Instead, the questions, as they were with Scalia and Thomas (and don't forget Kennedy), are:
How closely does Ginsburg's voting record mirror that which we would expect from partisan politicians--whether conservative Republican politicians or liberal Democratic ones--on those most highly partisan-charged issues?
How politically conservative or liberal is her voting record across the broad swath of ideologically-laden issues?
How judicially activist or restrained is her record?

Well, [And again, this is mostly directed to my dear liberal friends.] brace yourselves.

How partisan her record?
Take a look. 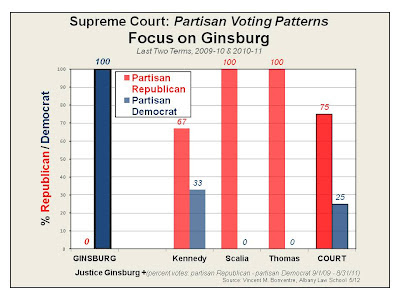 Yes, as lopsidedly partisan as Scalia's and Thomas's records.

Stated otherwise, Ginsburg's voting record in the highly partisan cases is 100% where Scalia's and Thomas's is 0%. And hers is 0% where theirs is 100%. Just the flip side.

She voted in support of the federal and Arizona campaign finance restrictions, as well as in support of the California university's refusal to fund a Christian student group which discriminated against gays and lesbians. Scalia and Thomas voted against all of those measures.

She also voted to allow a lawsuit by Arizona taxpayers challenging that state's alleged establishment of religion violation; voted to uphold a constitutional challenge to Arizona's enforcement of immigration laws; and voted to allow the broadcast of a trial challenging the constitutionality of California's ban on same-sex marriage. Scalia and Thomas voted the opposite in each case.

One might well expect the voting across the larger body of generally ideologically-laden cases to show much the same. It does. Ginsburg's record--like that of Scalia and Thomas--reveals a strong ideological bent. Hers, not surprisingly, is strongly liberal.
(click to enlarge)
GRAPH 2 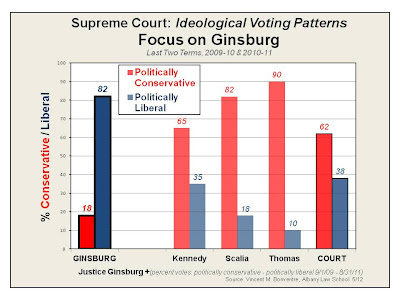 Her record in this regard is far more tilted in one direction than that of Justice Kennedy or the Court as a whole. While hers is more than 4-1 politically liberal, Kennedy's and the Court's records are both less than 2-1 politically conservative.

What about judicial activism-restraint? What is Ginsburg's record, and how does it compare with that of Scalia, Thomas, Kennedy, and the Court--all, as we've seen in previous posts, having highly activist records. Take a look. 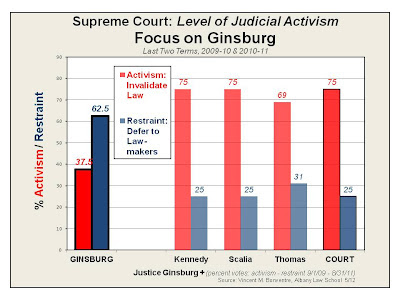 In short, Ginsburg's record is 2-1 judicial restraint. Scalia's, Thomas's, Kennedy's, and the Court's are 3-1 or 2-1 judicial activist.

So who's deferring to the judgments of the other branches and the states? The liberal Ginsburg! Not the conservatives Scalia and Thomas, or the swing vote Kennedy, or the conservative Court itself.

BUT, let's look a bit deeper. What did she vote to uphold? What to invalidate?

Again, Scalia, Thomas, and Kennedy voted to invalidate the state's judgment in each of those cases--with the single exception of Kennedy who voted to uphold the state university's anti-discrimination rule.

Scalia and Thomas voted to uphold all those laws. Kennedy did as well, except for the law allowing juveniles to be sentenced for life with no parole.

What is undeniable is that Ginsburg's record is one of more restraint--i.e., less judicial activism--than that of her conservative colleagues. She deferred to the choices of the other branches and the states much more frequently than Scalia, Thomas, Kennedy, and the Court itself. HOWEVER....

What is also undeniable is that  her activism-restraint record is simply a reflection of the highly ideological pattern of her voting record generally.

So Ginsburg voted to uphold laws that placed restrictions on business, that held businesses accountable in tort law, that protected gay rights, and that limited campaign spending. All laws favored by political liberals. (By the same token, Scalia and Thomas, not surprisingly, voted against all those laws.)

If one likes the way Ginsburg votes--prefers the way she votes to that of Scalia and Thomas--that's almost certainly a reflection of one's own political, ideological, philosophical leanings. NOT any realistic or objective assessment of her voting as being more balanced or neutral or detached than that of the conservative Justices.

To be plain, Ginsburg's record shows her to be as ideologically driven--yes, even partisan--as Scalia and Thomas. Just in the opposite direction.
[Disclosure: I much prefer her record to theirs. But I'm trying not to kid myself why I do.]

To conclude our little study of Justice Ginsburg's record, let's put all the foregoing together in one increasingly cluttered graph.
(click to enlarge)
GRAPH 4 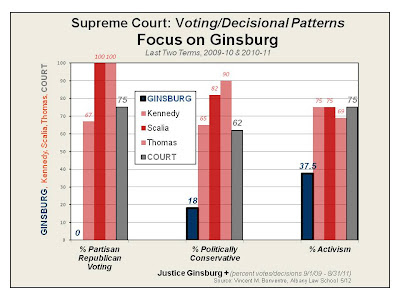 Or, to flip the Republican and Conservative ratings to Democratic and Liberal: 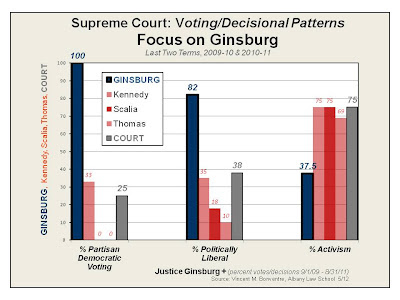 Either way you look at it, Ginsburg's record is as lopsidedly partisan and ideological as Scalia's and Thomas's. And her record may be less activist then theirs, but that's because more liberal laws happened to be at issue and she, as would be expected, voted to uphold them.


[As stated in previous posts, this series is based on my research over the last several weeks. The pool of cases on which my findings are based is explained at the end of each of the 3 previous posts on New York Court Watcher. See Supreme Court: How Partisan? Ideological? Activist? (Part 1: Focus on Scalia) --with graphs!, May 1, 2012; Part 2: Focus on Justice Kennedy, May 3, 2012; Part 3: Focus on Justice Thomas, May 6, 2012]