Let's look at his record the same way we've looked at theirs. So what is it?

What about his voting in those highly partisan-charged cases? You know, the ones involving guns, gays, immigrants, campaign finance, and other issues with deep partisan divides. Take a look. 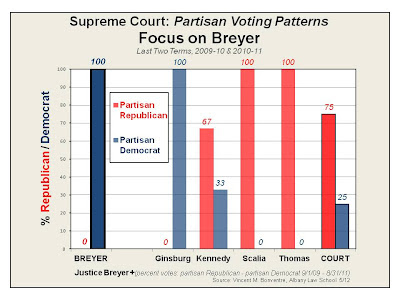 That is, Breyer voted in every one of these very highly charged cases just the way Ginsburg did. He voted exactly the way we would expect a very partisan liberal Democratic politician to vote.

What about his record in that larger body of generally ideologically-laden cases? 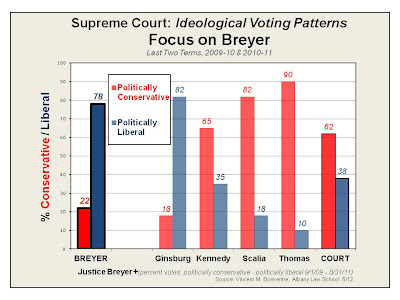 Again, Breyer's record is similar to Ginsburg's. But it's similar, not identical.

Breyer's record is slightly less politically liberal. Still nearly 4-1 politically liberal to conservative. But there are some differences in their records. Surveying all the cases to identify those in which he and Ginsburg were on opposite sides reveals some interesting examples.

There were cases, however, where Breyer was on the opposite side of Ginsburg in which he took the more politically liberal position. He was with the Court majority--against Ginsburg, Thomas, and Alito--in refusing to apply a sex-offender registration law retroactively. And he was in dissent, with Justice Stevens, against Ginsburg and the rest of the Court, in voting that Miranda rights could only be waived explicitly.

So, what about Breyer's activist-restraint record? Let's see. 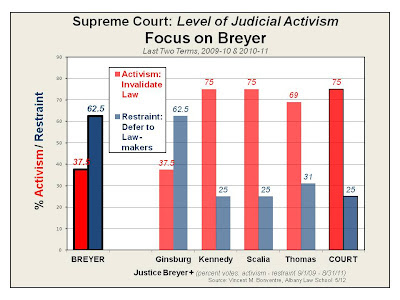 In short, like Ginsburg, Breyer compiled a record that was much less judicially activist than that of the conservative Justices and the Court itself. But, as we noted in the post on Ginsburg, that is not surprising given the laws that were at issue. Most of them happened to be laws that would be favored by political liberals and, thus, more likely to be upheld by liberal Justices.

Consider some of them.

So, like Ginsburg, Breyer typically voted to uphold politically liberal laws, and to invalidate politically conservative ones.

The two did not, however, always agree on which laws to uphold or invalidate. As previously noted, Breyer voted to uphold California's prohibition on selling violent video games to minors; Ginsburg voted to invalidate the law. Breyer voted against a state tort law permitting lawsuits against vaccine manufacturers; she voted to allow such lawsuits. Other than those two cases, Breyer's and Ginsburg's uphold-invalidate votes were the same.

Let's wrap up with a graph that puts it all together. (I hope it's not getting too busy for easy reading.) 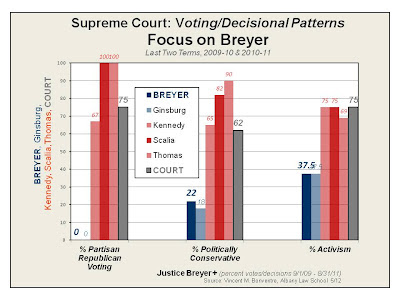 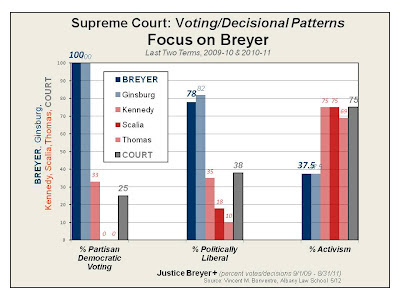 No matter how you look at it, Democratic and liberal or Republican and conservative, Breyer's record looks unmistakably partisan and ideological. Yes, and so do the records of Ginsburg, Scalia, and Thomas. Of the Justices we've studied thus far in this series, only Kennedy has a record that looks less partisan and and a little less ideological.

Coming next: the appointees of President George W. Bush--Chief Justice Roberts and, then, Justice Alito.


[As stated in previous posts, this series is based on my research over the last several weeks. The pool of cases on which my findings are based is explained at the end of each of 3 previous posts on New York Court Watcher. See Supreme Court: How Partisan? Ideological? Activist? (Part 1: Focus on Scalia) --with graphs!, May 1, 2012; Part 2: Focus on Justice Kennedy, May 3, 2012; Part 3: Focus on Justice Thomas, May 6, 2012]