Now for the Chief.
John G. Roberts.
The "umpire." That's what he insisted a Justice should be during his confirmation hearings.

Yes, deciding cases by simply applying the rules and policies set by others. Others like the Legislative and Executive Branches and by the states. Pretty mechanistic. Is it a ball or a strike? Is the runner safe or out?

It's all a matter of the rules and policies already established by others. Not by the Justices. Objective, neutral, detached decision-making. Not according to the Justices' own preferences or views or politics.

OK. So let's look at the numbers for Chief Justice Roberts. The very same data and analyses we've used in the previous posts in this series for other members of the Court. And we'll look at that data in a same set of graphs. In fact, let's do that at the start and discuss later. 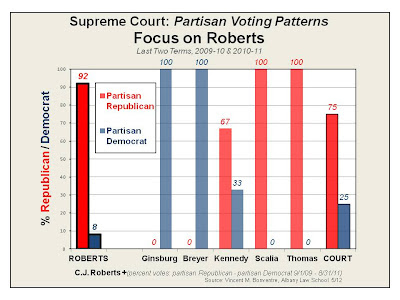 So he voted in 92% of the highly charged cases like a partisan, conservative Republican politician would. 77% of Roberts' votes were politically conservative--or 3 times as many as were liberal.

Regarding judicial activism and restraint?
(click to enlarge)
GRAPH 3 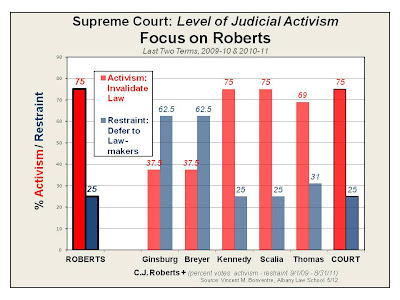 Roberts voted to invalidate the choices of the other branches and the states 75% of the time--or 3 times as often as he voted to uphold the rules made by others.

Let's now consider what the numbers mean and look what underlies them.

As for voting like a partisan Republican politician: yes, Roberts' 92% record shows that he does. A lopsided  record, but not entirely one-sided. It's not 100% partisan as are the records of fellow conservative Justices Scalia and Thomas, or the records of liberal Justices Ginsburg and Breyer. No. Roberts didn't vote like a conservative Republican politician in every single one of the highly partisan-charged cases.

In a case dealing with an immigrant who was a criminal defendant, Roberts sided with the Court's liberals. He agreed that the immigrant's right to counsel was violated when his criminal lawyer gave erroneous advice that led to a deportation order. Roberts parted with Scalia and Thomas on that issue.

As for his record in the larger universe of ideologically-laden cases, Roberts' 77% politically conservative voting was about as lopsidedly ideological as the voting of Scalia, Ginsburg, and Breyer. It was a bit less lopsided than that of Thomas. A bit more so than that of Kennedy.

Looking behind these numbers is telling. Roberts voted with the liberals, and against Scalia and Thomas, in several cases.

Among those, he voted that workers can sue their employers for retaliation under the Fair Labor Standards Act; that a death row inmate's habeas corpus petition should be considered despite his lawyer's lateness; that a death row inmate's claim that his lawyer was incompetent deserved greater consideration; and that an accused's conviction should be overturned because the judge violated his right to a public trial.

A few other cases similarly suggest a moderating aspect to Roberts' overall voting. In the previously mentioned case involving the criminal defendant who was a deportable immigrant, Roberts actually split the difference between the liberal and conservative Justices.

The liberal Justices argued that a criminal lawyer must inform his client if following the lawyer's advice will lead to deportation. The conservative Justices argued that a criminal lawyer has no such obligation. Roberts took the middle position that a lawyer must not incorrectly inform the client, if he informs the client at all.

Roberts similarly split the difference in other cases. One involved California's law prohibiting the sale of violent video games to minors. The Court majority held that such a ban violated the 1st Amendment. The dissent argued that the law was fine. Roberts took the position that this particular law was too broad, but that a more carefully drafted law would be constitutionally valid.

Another case was the one involving the imposition of a life sentence without parole on a juvenile convicted of a serious, violent felony. The majority held that such sentences were always unconstitutional on minors. The dissenters argued that punishment policy should be left to legislators. Roberts took the position that life sentences for juveniles might be fine generally, but not for non-homicidal crimes as in this case.

Finally, as for activism and restraint, Roberts 75% judicial activist record is equal to that of Scalia, Kennedy, and the Court itself, and slightly more activist than that of Thomas. His record is twice as activist as that of liberal Justices Ginsburg and Breyer--i.e., he voted to invalidate decisions of the other 2 branches and the states twice as often as they did.

Roberts did, however, break with conservative Justices Scalia and Thomas, and join the liberals, in some of the activism-restraint cases. He broke with Scalia and Thomas to vote against the Florida life-sentence law--to the extent it authorized a fixed life sentence on juveniles guilty of non-homicidal crimes. He also broke with them to uphold the federal "honest services" law under which Enron executives were being prosecuted--to the extent the law prohibited bribery and kickbacks.

Otherwise, Roberts' 75% judicial activist record conforms to the partisan and ideological patterns we've already seen to be evident in his voting overall.

We'll conclude as we have in the previous posts in this series. Here's a graph that combines the 3 above.
(click to enlarge)
GRAPH 4 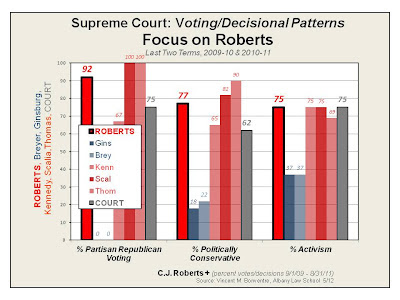 There probably is too much going on in this single graph. But some things do stand out. Roberts: 92% partisan Republican voting, 77% politically conservative voting, 75% judicial activist voting, and, across the board, he's among the Court's partisan conservative activists.

Now here's the graph with the partisan and ideological figures flipped. 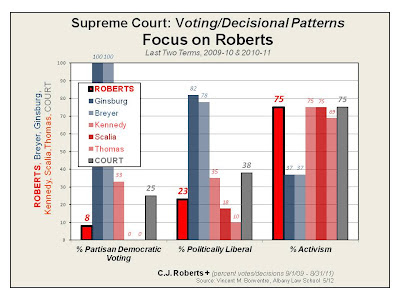 It shows the same. But like standing upside down.
Roberts: hardly ever votes like a partisan Democrat would, very infrequently like a political liberal, and, again, he's quite the activist.

Sooo, our Roberts' record recap:
Partisan: lopsidedly like a conservative Republican politician.
Ideological: very much like a political conservative.
Activist: very much--3 times as activist as restrained.