Now let's look at Alito's record the way we've been looking at other Justices' records in this series. Looking at how partisan his voting has been. How ideological. How activist.


And as we have done with the others, let's look at Alito's numbers. Look at them in graphs that permit easy comparison with those of the other Justices, and then briefly discuss what lies beneath the numbers.


Here is how Alito's voting looks in those highly partisan-charged cases. 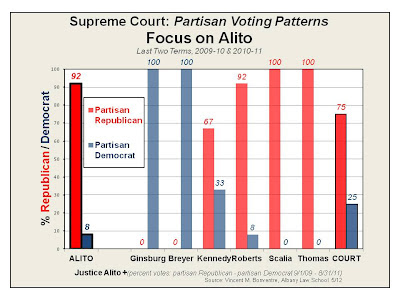 92% voting like a partisan conservative Republican politician in the highly charged cases. That places Alito's record in the same extremely partisan class as that of all the Justices we've previously focused on, except for Kennedy. (N.B., we have yet to look at the records of Justices Sotomayor and Kagan.)

Here's what Alito's record looks like in the larger pool of more generally ideological-laden cases. 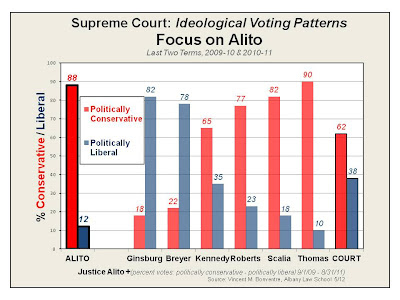 88% politically conservative. That makes Alito's voting among the most highly ideological on the Court--virtually tied with that of Justice Thomas. (Again, we have yet to consider Sotomayor or Kagan.) 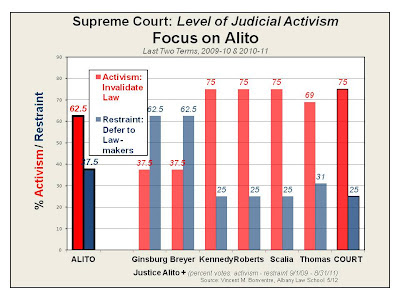 Nearly 63% activist. So Alito's record is not as activist as some of his colleagues. But he still voted to invalidate the judgments of the other branches and the states much more frequently than to uphold them.

Let's now look at some of what underlies Alito's numbers.

In the highly charged cases--i.e., issues involving, guns, God, gays, immigrants, etc.--Alito's 92% voting like a conservative Republican politician was not quite perfectly partisan. Not like the voting of Scalia, Thomas, Ginsburg, and Breyer which was. But like that of Chief Justice Roberts. Alito, like Roberts, actually broke--at least once--from the partisan pattern.

In fact, Alito did so in the same case as Roberts. Alito actually wrote the opinion, which Roberts joined, in the case involving the criminal defendant whose lawyer advised him incorrectly that he would not be deported if he pled guilty.

The Court majority held that the defendant was entitled to an attorney who would advise him correctly on immigration matters. Scalia and Thomas, in dissent, argued that a criminal defense lawyer didn't have to advise his client about immigration matters, correctly or incorrectly. Alito, with Roberts, took the middle position that the lawyer had to advise correctly, if he gave advice at all.

Otherwise, Alito's record in the highly charged cases, like Roberts', was strictly in accord with how a partisan conservative Republican politician would be expected to vote.

Although Alito generally voted on the same side of the ideologically-laden cases as his fellow conservatives Scalia and Roberts, he sometimes took a different view of the issues.

For example, in the highly publicized funeral protest case, Alito dissented alone to argue that there was no 1st Amendment right to cause emotional injury to the family of the deceased by denouncing him during and in the vicinity of the funeral. He also authored a dissent, disagreeing with the position taken by Scalia and Roberts, to argue that the federal sex offender registry law should be applied to past offenders.

Among others, he authored another dissent, again against the position taken by Scalia and Roberts, rejecting a criminally accused's claim of a speedy trial violation. And yet another dissent, against Scalia's and Roberts' position, to argue that a feolony conviction for battery should be considered a violent crime, even though the actual use of force was not an essential element of the offense.

Alito's nearly 63% activist versus restraint record was slightly lower than that of several of his colleagues, and equal to that of liberals Ginsburg and Breyer.


Like other conservatives on the Court, Alito voted to invalidate several state laws that permitted tort litigation against business beyond that authorized by federal law, as well as to invalidate an aspect of the Sarbanes-Oxley Act particularly odious to business. He also, not surprisingly, voted with the conservatives to invalidate state and federal campaign finance restrictions.


He voted to support religion in yet another case, but this time by voting to invalidate a state rule that denied funding to a student Christian group that discriminated against gays and lesbians.


He voted, with Scalia and Thomas, to uphold a state law permitting a life sentence without parole for juveniles, he voted with Roberts and the Court's liberals to uphold an aspect of the "honest services" law used to prosecute Enron executives.


He voted to invalidate a state law prohibiting the sale of violent video games to minors. But he did so separately in a concurring opinion, joined by Roberts, making clear that he would vote to uphold such a law if it were more carefully drafted. And he voted, by himself in lone dissent, to uphold a federal law criminalizing so-called animal crush videos.


So, Alito's record reveals no particular reluctance to invalidate, or to uphold, the choices made by other branches or the states. It does however show a strong preference for business and for traditional religion. It also shows a willingness to distinguish between kinds of expressive activity to be protected. Financing political campaign communications-yes. Violent videos (and funeral protests)--not necessarily.


Let's wrap up with the cumulative (cluttered graphs). 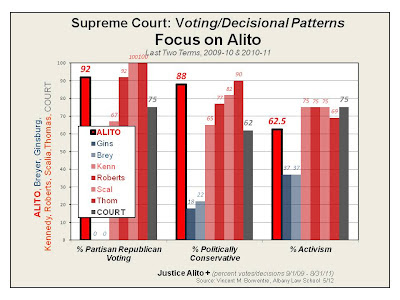 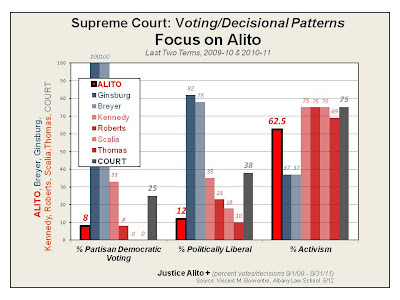 What's clear is that Alito rarely votes the way a partisan Democratic politician would, nor like an ideological liberal would.