First, a prefatory note.
Yes, I'm politically partisan (a Democrat) and ideological (pretty liberal), and I certainly have personal preferences, perspectives, and predispositions.
Just like other members of the species. Including judges.

To be sure, judging isn't, can't be, and shouldn't be entirely neutral, mindless, or robotic.
Judges should--and the best of them do--have well informed and well considered understanding--i.e., views, ideas, wisdom--about the judicial role, about constitutional government, about liberty and authority and rights and responsibilities in a free society, about the rule of law, and other essential facets of governance in a republic.
And judges should--and the best of them do--inform their decisions with such understanding and wisdom.

That is far far different, however, than decisionmaking shaped by partisan bias or ideological predisposition. Unfortunately, as we have been seeing in this series, decisionmaking at the current Supreme Court--the Justices' voting--has been marked by just such partisanship and ideology.

But....on to the subject matter at hand. Yes I'm a partisan and yes I'm ideological. But that is a far different matter than how I would vote as a judge--or think I would vote if actually operating within that cauldron of the Court.

Not that I'm sure I'm right--if there is such a thing in these matters. But only that my own views of the judicial role, constitutional government, etc. (see above) would lead me to vote a particular way in these cases. And readers of New York Court Watcher are entitled to know since I've been unabashedly skewering the Justices for the way they have been voting.

So here goes. I've incorporated my own hypothetical voting into the graphs we've seen in previous posts.
First, those cases with the highly partisan-charged issues.
[And no, I didn't fix my votes to come out a certain way! This is actually how I would have voted on the issues.] 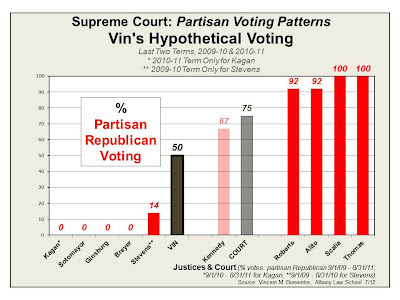 And the Democratic flip side. 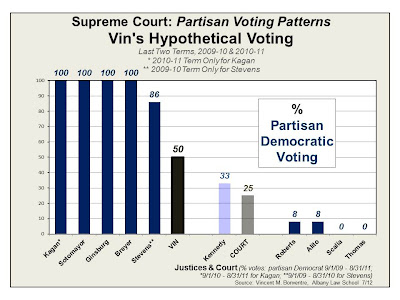 [And yes, I was surprised my voting turned out to be 50-50. No doubt, I'm a disappointment to my ideological allies. Yes, my sympathies are much more closely aligned with the liberal Justices and with liberal Democratic politicians than with conservatives--that's why I put my voting bar next to theirs. But again, this is about judging.]


As for some of my specific hypothetical votes:
I would have voted with the liberal-Democratic Justices in the sex discrimination lawsuit against Walmart. [The common allegations seemed a sufficient tie to justify a class action.]

I would have voted with the lib-Dems in allowing the broadcast of the same-sex marraige trial [A public trial viewable by an interested public--and why not?], as well as to uphold a state university rule that denied funding to student groups that discriminated against gays and lesbians. [Freedom to believe and advocate what you want, yes. But entitlement to public monies to violate public policy, no.]

I also would have voted with the lib-Dems to uphold the Sarbanes-Oxley provision protecting oversight board members from politically-based removal by a President. [This seemed a compelling protection versus a minimal compromise of separation of powers.] And I would have voted with the lib-Dems that a criminal lawyer was constitutionally ineffective to fail to advise his client that he'd be deported if he pled guilty. [Seems a pretty critical mistake.]

On the other hand, I would have voted with the conservative-Republican Justices to allow a state to give tax credits to parents sending children to private school--whether or not religiously affiliated [Don't like it, but religiously neutral government aid seems a de minimis establishment problem, if at all.], as well as to allow a state to make it illegal for an employer to hire an unauthorized immigrant. [Don't like it, but seems sufficiently removed from the federal government's regulation of immigration itself.]

I would have voted with the con-Repubs to invalidate federal restrictions on spending for political commercials by corporations or by people [The 1st Amendment is, and should be, a near-impregnable wall of prohibition against government interference with politically expressive activity, unless the restrictions are near-absolutely necessary.], as well as to invalidate a state law that effectively penalized too much political activity by giving equalizing funds to candidates who spent less. [Same reason.]

And I would have voted with the con-Repubs to hold that the 2nd Amendment's individual right to bear arms is constitutionally enforceable against the states. [Don't much care for guns and do like gun control, but it seems clear that the 2nd Amendment reflects an understanding of the Framers that gun ownership is an essential protection of free people, and Americans have continued to view gun ownership as fundamental.]

So those are examples of how I would have voted in those highly-charged cases, with a brief bottom-line of why.

Now what about that larger pool of less-charged, yet still ideologically laden cases? Here's what my hypothetical voting looks like.
(click to enlarge)
GRAPH 3 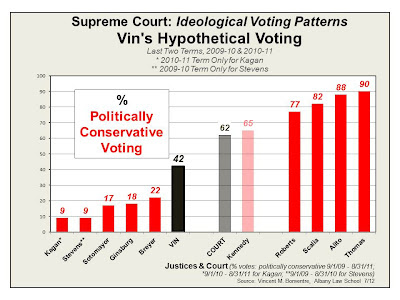 And the liberal flip side. 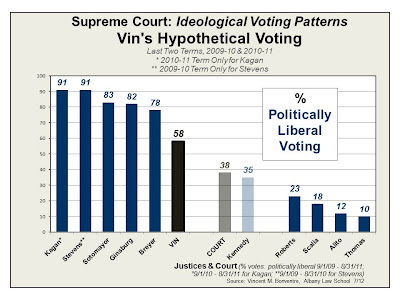 My voting would be nearly the ideological reverse of the Court as a whole.

Finally, regarding judicial activism versus restraint: 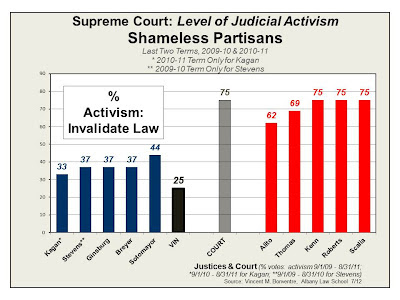 Well...
Looks like I would be a judicial restraintist. Mostly upholding the actions of the other branches and the states. In only 25% of the cases involving federal or state laws would I have voted to invalidate. That would make me the most restrained member of the Court!

[Not really sure that's any virtue. No, actually I do.
I think--i.e., one of my views about the judicial role and about tripartite, federal, constitutional government--is that the judiciary should respect the judgments of the other branches and the states. Regardless of whether those judgments are wise or foolish, benevolent or mean-spirited, sensible or moronic, unless they are irreconcilable with fundamental constitutional principles.]

So, for example, unlike the liberal Justices, I would have voted to uphold Arizona's tax credits to parents who send their children to private--mostly religious-affiliated--schools. Upheld Arizona's law making the hiring of unauthorized immigrants illegal. Upheld the display of a Christian cross on a funereal memorial on federal property.

I would also have voted with Justice Thomas to uphold California's law prohibiting the sale of violent video games to minors. And with Alito to uphold the federal law prohibiting crush videos--depictions of wanton cruelty to animals.

I would have voted with the liberals to uphold state tort law allowing lawsuits for mislabeled drugs, despite the presence of federal laws on the same subject. And to uphold state law favoring consumer class actions, despite federal laws promoting arbitration. As well as to uphold a California state university regulation denying funding to any student group that discriminates on the basis of sexual orientation.

On the other hand, I would have voted to invalidate Florida's law allowing a life sentence without parole for a non-homicidal crime committed by a juvenile. To strike both the federal and Arizona campaign finance laws. And to strike all those federal and state gun control laws that fail to recognize an individual's fundamental right to own and possess firearms.

So, there it is. Or I am.
Now you know where I stand on these issues--judicially, not politically--and you can determine for yourself how my views might have affected my commentary in this series of posts on "How Partisan? Ideological? Activist?" the Supreme Court.