[Hope everyone had a wonderful Thanksgiving.
Have to mention that I had my 1st Flagel (= flat bagel) at my brother and sister-in-law's. LOVED it!. It's not quite eggplant parm or turkey, but it's awfully good!]

In the last post, we took a look at recent retirees. Three of them. Justices O'Connor, Souter, and Stevens. We then identified the 4 septuagenarians currently on the Court. We looked at 2 of them: Justices Ginsburg and Scalia.

We considered their ages-- now and at the end of re-elected President Obama's next term--the ideological leanings evident from their voting records, and some indications of their readiness or not to retire in the next 4 years. [See Court Elders: The Septuagenarian Justices (Part 1), Nov. 21, 2012.]

Let's now continue with the other 2 Justices who are in their 70's: Kennedy and Breyer.

Anthony Kennedy Conservative, but liberal on some issues. 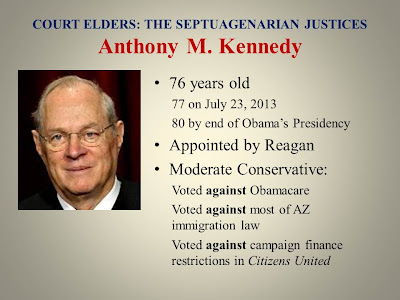 Justice Kennedy would not seem to be a good bet for retiring too soon.

As all Court watchers are well aware, Justice Kennedy is a generally conservative Justice. But he's not nearly as one-sidedly so as Scalia or Thomas. And being less-rigidly ideological, he is the frequent swing-vote on the Court. In other words, his vote often decides the cases.

As such, in the most consequential cases before the Court, it is his vote that is most often the most solicited. Both by litigants and by the other Justices.


Not surprisingly, by all accounts and indications, he enjoys that exalted position. As long as he is healthy and happy--and he seems to be--there is little reason to expect that he would choose to retire any time soon.

Of course, if Kennedy did retire, that would give Obama the opportunity to replace this usually conservative-voting Justice with a more reliably liberal one. That would change the ideological balance on the Court. It would free the liberal Justices from having to wish and hope and pray for Kennedy's swing-vote in the big cases. 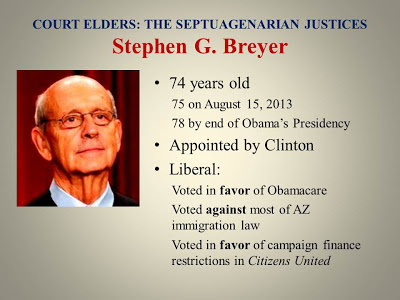 Stephen Breyer seems to love being on the Court. The intellectual challenges involved in judging. The opportunities his position generates to speak and write about his views on all matters judicial and constitutional.

He and Justice Scalia have become a virtual liberal-versus-conservative road show. It's clear that Breyer thoroughly enjoys it. That he enjoys the audience his Justiceship assures for his speeches and his writings--including his book, Active Liberty: Interpreting Our Democratic Constitution.

There is little reason to believe that Breyer has any intention of leaving the Court in the near future--unless of course there are private reasons not publicly known.

If he were to retire during the next 4 years, however, that would likely have very little, if any, impact on the Court's ideological balance. Obama would surely be expected replace liberal Breyer with another reliable liberal.

So there it is. The 4 septuagenarian Justices. One very conservative. One more moderately so. And 2 very liberal.

Unless one of the conservatives--Scalia or Kennedy--were to retire during the next 4 years, the re-elected President will have little opportunity to alter the Court's conservative tilt. If either of the 2 liberals--Ginsburg or Breyer--were to retire, Obama would almost certainly appoint another liberal to fill the vacancy. There would be little if any ideological impact from that.

In the next post, we'll take a quick look at the remaining 5 Justices. The non-septuagenarians. Relatively speaking, at least, the Court's "Yoots." [Who doesn't love MY COUSIN VINNY ?]