In parts 1 and 2 of this series, we took a quick look at the 4 septuagenarians currently on the Court--Justices Ginsburg, Scalia, Kennedy, and Breyer. Specifically, we pointed to their ages-- now and when President Obama's 2nd term ends--their ideological leanings, and the likelihood of their retiring in the next 4 years.
[See Court Elders: The Septuagenarian Justices (Part 1), Nov. 21, 2012; (Part 2), Nov. 24, 2012.] 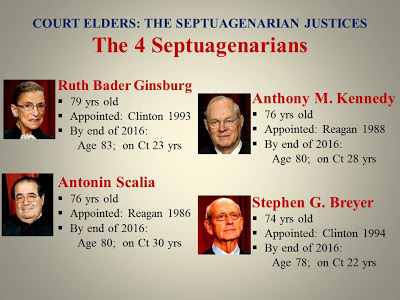 As for the remaining 5 Justices, they are all at least 10 years younger than the youngest septuagenarian. Just how young are these relative young-ens (or "yoots," per Joe Pesci's Vinny Gambini in My Cousin Vinny)?
And how old will they be at the end of Obama's presidency? As well as how many years on the Court by then?

Here it is in one nice [suitable for framing!] visual: 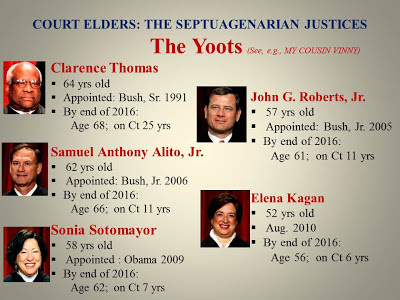 Justice Thomas is the oldest of the non-septuagenarians; Justice Kagan, the youngest. The range from 64 years of age to 52. That contrasts considerably with the septuagenarians, from 79 to 74. That's an average 18 year age difference.

As for time on the Court, again Thomas is at one end of the spectrum and Kagan at the other. By the end of Obama's presidency, Justice Thomas will have been on the Court for 25 years; Kagan for 6.

Now...age and time on the Court, typically related matters, have unsurprisingly been factors in Justices' decisions about retiring. For that reason--as well as the oftentimes also-related matters of a Justice's health and the health of a spouse or other family member--advanced age and lengthy time on the Court make it much more likely that a Justice would consider retiring than one who is much younger and was appointed much more recently.

And for that reason, we have focused on the septuagenarians as possible retirees while Obama is still President. But we ought to look at the actual data. That is, data about retirements.