(The new school year is now in full swing. [Happy to be back.] But the Saratoga meet came to an end last week. [Mild depression.]
Reviewing the meet for the Saratoga Highlights will be therapeutic [Coming later this year.] And, of course, there's always lots to study and write about courts and judges and public law that will keep me occupied and out of trouble--filling the time I'd otherwise be at the track.)

The first focus of the new academic year for New York Court Watcher will be the previous year at the Supreme Court and at New York's highest court, the Court of Appeals. And we'll start off with who's producing what. More specifically, for the first few posts, who's producing how much.

Let's begin at the center seat of the 2 high courts: Chief Justice John Roberts and Chief Judge Jonathan Lippman. Again, we're looking at last year--i.e., the year that began with last year's summer break and ended with this year's (August 2012 thru July 2013).

How many judicial opinions did Roberts and Lippman each write during that time? Take a look.
CHART 1
(click to enlarge) 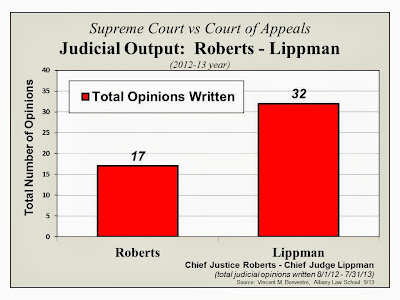 Yes, New York's Chief Judge Lippman authored nearly twice as many total judicial opinions as did Chief Justice Roberts during the same period of time. (We'll get to graphic breakdowns of majority, dissenting, & concurring opinions below.)

And yes, I know there's the but, but, but, and the yet, yet, yet, and the what ifs, and the did you considers, etc. If anything, however, it seems that most considerations make the contrast even more--not less--significant.

Take just one for now: their administrative responsibilities. Both Roberts and Lippman are the not only the chief judges of the courts on which they sit, but they are also the chief executives, respectively, of the federal and New York judicial branches. And--dealing with what's significant--the New York judicial branch overseen by Lippman is far larger, has far more courts and judges and staff, and handles far more cases than the federal judiciary overseen by Roberts.
(We'll deal more fully with that and other specifics later in this series.)

Let's now confine ourselves to majority opinions--actually, opinions written for the court, majority or unanimous.
CHART 2 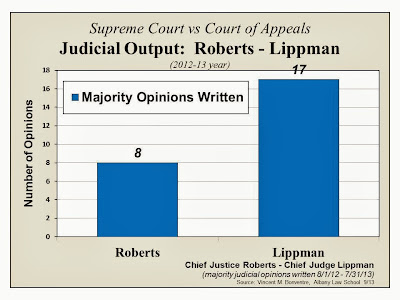 Here, the contrast is even greater. Lippman wrote more than twice as many ruling opinions for his court than Roberts did for his.

So, what about the separate opinions? The separate concurring opinions and dissents?
Here goes.
CHART 3 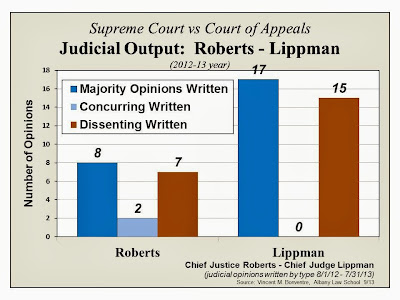 As shown, Lippman wrote twice as many dissents--as well as majorities--as did Roberts. He authored no concurring opinions last year, while Roberts wrote 2.

For one last look, let's put the number of total opinions, majorities, and separate opinions (concurring + dissenting) in one chart.
CHART 4 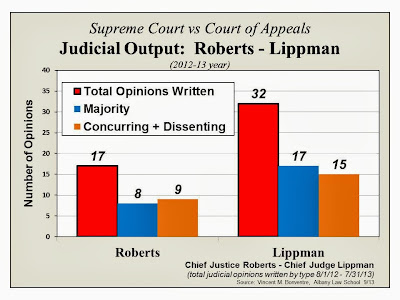 Well there it is. Could not be more plain.

For whatever reason--and partisans of each court will certainly have theirs--the Chief Judge of New York's highest court has been much more prolific in producing judicial opinions than has been Chief Justice Roberts. These are just the facts. Unembellished, unelaborated, unexplained--but still the facts.

[Disclosure: I have considerable admiration for both Lippman and Roberts. I think they are both enormously capable. I am, however, much more on Lippman's judicial and ideological wavelength than Roberts'.]

Next post: we'll continue with part 2 of this series and look at the judicial output of a couple of senior judges of each court.

[N.B. A numerical correction was made to the charts subsequent to the original publication of this post. The number of Chief Judge Lippman's majority opinions was changed from 18 to 17, and that was reflected in the number of his total opinions from 33 to 32. (One "opinion by" Lippman in a search engine was actually a decision without opinion.) The correction changes nothing of significance in the discussion. vmb 9/24/2013]