Let's now take a look at the judicial output of the next two most senior members of each court. On the U.S. Supreme Court, that would be Justices Antonin Scala and Anthony Kennedy. On the New York Court of Appeals, that would be Judges Victoria Graffeo and Susan Read.

Let's first look at the total opinions written by each of them last year. 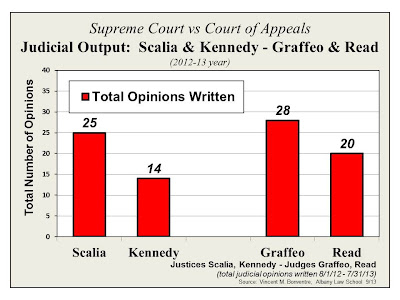 The picture is a bit less straightforward than it was when we juxtaposed Roberts' and Lippman's records. The total number of judicial opinions by New York Judges Graffeo and Read, combined, is significantly higher than that of the Justices Scalia and Kennedy combined--48 as compared to 39.

But while New York's Judge Graffeo authored the most opinions of the four, Justice Scalia came next. He wrote more total opinions than did Judge Read, as well as more than his colleague Justice Kennedy. The latter wrote the fewest of all. He authored significantly fewer opinions than did either Scalia or Read, and only half as many as Graffeo. 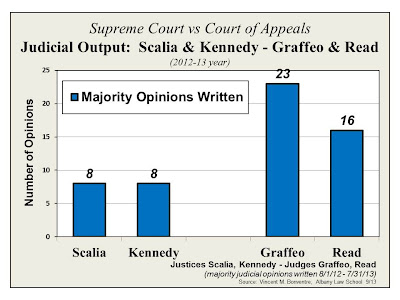 As the chart shows, when considering only those opinions that garnered the support of the majority of the Court--from a bare majority to unanimous--the picture is clearer. The two New York Court of Appeals Judges each authored many more majority opinions than either of the two Justices. Judge Graffeo wrote nearly three times as many majorities as did Scalia or Kennedy. Judge Read wrote twice as many as they did.


What about separate opinions--i.e., separate concurrences or dissents? 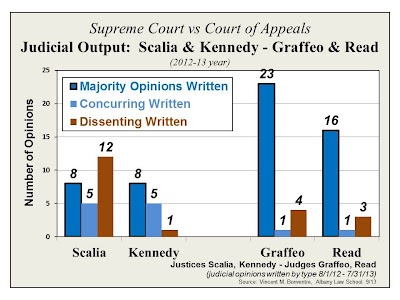 That is the reason for Justice Scalia's high number of total opinions. [As depicted above in Chart 1.] High number, that is, as compared to Justice Kennedy, and to New York's Judge Read as well. As shown in Chart 3, Scalia authored several times as many dissenting opinions as did Kennedy, Read, or Graffeo--none of whom authored more than a few.

As also shown in Chart 3, both Justices Scalia and Kennedy wrote several concurring opinions, whereas Judges Graffeo and Read wrote only one apiece. Nevertheless, regarding majority opinions--opinions written on behalf of the Court--both Graffeo's and Read's outputs dwarf those of Scalia and Kennedy.

Now let's put it together in a single chart. 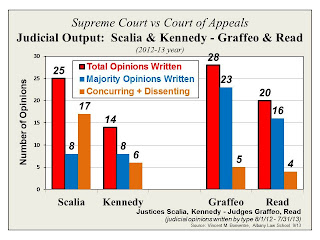 Only in the category of separate opinions was there an exception. The number of Scalia's separate opinions--i.e., his written concurrences plus dissents--was far greater than that of either Judge Graffeo or Read (or Justice Kennedy).

As noted at the conclusion of the preceding post dealing with Chief Justice Roberts and Chief Judge Lippman, these are just the facts, the numbers. The unvarnished, unembellished, unexplained data. Again, partisans and others will have their ifs, ands, buts, what ifs, and yets, etc.

Not that those considerations are irrelevant or unimportant. But for now, these are the raw figures. Significant in themselves.


In the next post, we'll combine the data from the first 2 posts. We'll quickly look at the numbers for Chief Justice Roberts together with those for Justices Scalia and Kennedy, and place them side by side with the numbers for Chief Judge Lippman together with those for Judges Graffeo and Read.
In the post after that, we'll look at the judicial output of Justices and Judges we have not yet covered.