In the last 2 posts, we compared the judicial opinion outputs of Chief Justice Roberts and New York's Chief Judge Lippman, and then of Justices Scalia & Kennedy and Judges Graffeo & Read. Now let's combine those in a few charts just to make it easy to see where we are thus far in this series.
[In the next post we'll get to some additional Justices and Judges.]

First, let's look at total opinions--i.e., the sum of majority + concurring + dissenting opinions authored by each Justice and Judge. And specifically, for this series, we're looking at the immediately preceding year at the Supreme Court and the New York Court of Appeals, from summer break 2012 to summer break 2013. 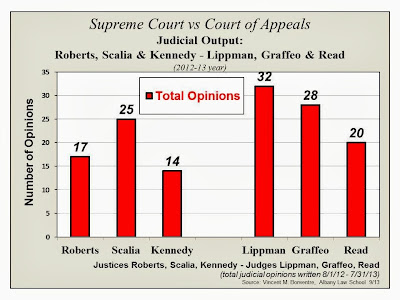 Let's look inside these figures. Let's start with the number of majority opinions within these totals.
CHART 2 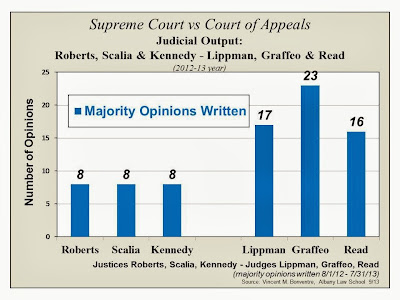 Again, the output of the Court of Appeals Judges is much greater than that of the Justices. Indeed, each of the three New York Judges considered thus far authored at least twice as many majority opinions--i.e., controlling opinions for the Court as a whole--than did any of the three Justices. Judge Graffeo, for the starkest example, wrote nearly 3 times as many majority opinions as did Chief Justice Roberts or Justices Scalia or Kennedy.

Note also, that when majority--i.e., again, controlling--opinions are considered alone, Justice Scalia's authorship drops dramatically. The number of majority opinions he authored--like the number for his two colleagues--is far less than the number for any of the three New York Judges.

Let's take a look at that graphically, simply joining the first 2 charts.
CHART 3 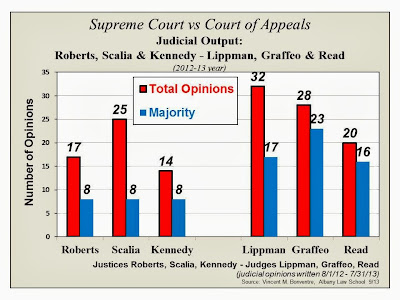 What immediately jumps from Chart 3 is that Scalia's majority opinions are just 1/3rd of the total opinions he authored. He is prolific--but mostly writing separately from his colleagues. That is not a criticism, not at all. Just a fact. And it helps to explain why his number of total opinions is an exception to the general pattern among the Justices.

Note also that Chief Judge Lippman's number of total opinions is likewise considerably greater than the number of his majorities. He did author more than twice as many controlling opinions as did any of the 3 Supreme Court Justices. But there are a significant number of non-majorities that make up his total.

Let's compare the number of majorities to non-majorities for each of these Justices and Judges.
CHART 4 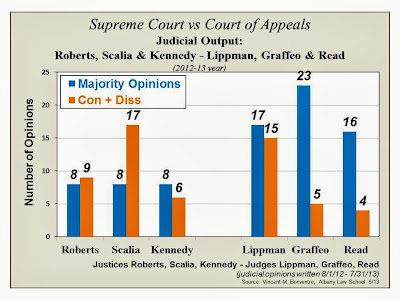 Again, Scalia's numbers jump out. He wrote more than twice as many separate opinions--i.e., concurring and dissenting--as majorities. By contrast, Roberts and Kennedy wrote nearly the same number of non-majorities as they did majorities--Roberts, 1 more non-majority than majority; Kennedy 2 less.

Finally, just for those who like everything in one tidy--if crowded--package, here's a chart combining all that's gone before.
CHART 5 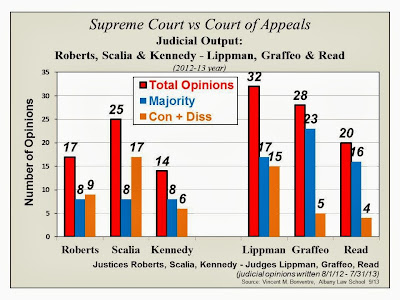 There it is. Cluttered, but all in one.

In the next post, we'll look at the judicial outputs of additional members of the Supreme Court and the Court of Appeals. Will we see the same patterns? Or will we find that what we've seen thus far is out of the ordinary?

[N.B. A numerical correction was made to the charts subsequent to the original publication of this post. The number of Chief Judge Lippman's majority opinions was changed from 18 to 17, and that was reflected in the number of his total opinions from 33 to 32. (One "opinion by" Lippman in a search engine was actually a decision without opinion.) The correction changes nothing of significance in the discussion. vmb 9/24/2013]