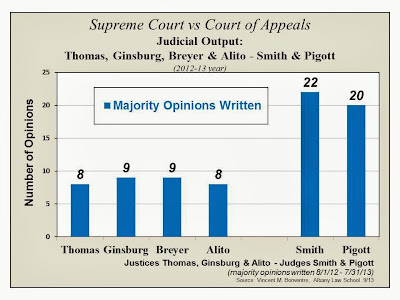 As is clear from Chart 1, each of the 2 New York Court of Appeals Judges authored far more majority opinions--i.e., opinions written for their Court that decided the case--than did any of the Supreme Court Justices. This is the same kind of sharp contrast that we saw with the other Judges and Justices whose judicial outputs we compared in the previous posts in this series.

In those first 3 posts, we looked at last year's opinion output of the 3 most senior members of each court. That is, Chief Justice Roberts and Justices Scalia and Kennedy of the nation's high court; Chief Judge Lippman and Judges Graffeo and Read of New York's. (See Part 3.)

Thus far, the pattern emerging is that the New York Judges collectively wrote significantly more judicial opinions than did the Justices. This is most dramatically true regarding majority opinions. It is also generally true regarding total opinions--i.e., the sum of majorities, separate concurrences, and dissents.

The only exception seen thus far is the total number of opinions authored by Scalia. He wrote more in toto than did New York's Judge Read. Scalia actually wrote only 1/2 as many majority opinions as Read--and even less than that compared to Lippman and Graffeo. But he wrote considerably more concurrences and dissents than did Read. That raised his total somewhat above hers. Other than that, the pattern was uniform.

In this post, we're looking at the judicial output of Clarence Thomas, Ruth Bader Ginsburg, Stephen Breyer, and Samuel Alito--the next 4 most senior Justices. And from the New York court, Robert Smith and Eugene Pigott--the next 2 most senior Judges.

What about their total opinions? 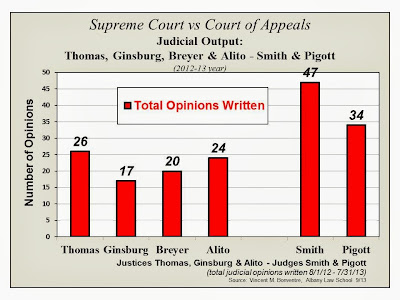 Again, the number of total opinions represents the sum of majority + concurring + dissenting opinions. (And as we've specified previously in this series, we're looking at the immediately preceding year at the Supreme Court and the New York Court of Appeals, from summer break 2012 to summer break 2013.)

The contrast is even greater for majority opinions than it is for the total number. Each of the 2 New York Judges authored more than twice as many opinions for their Court as did any of the Justices for theirs. Judges Smith and Pigott each wrote more than twice the number of opinions that decided appeals before the Court of Appeals than any of the 4 Justices--Thomas, Ginsburg, Breyer, and Alito--did for appeals before the Supreme Court.

What about the number of separate concurring opinions and dissents?
CHART 3 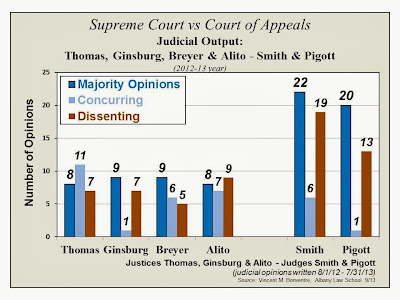 As reflected in Chart 3, Justice Thomas wrote more concurring opinions than did any of the other Justices or either of the 2 New York Judges. His 11 opinions--in which he voted with his Court's majority, but wrote separately to express some views of his own--are considerably more than the number written by Smith or Pigott. Indeed, far more than the number written by Judge Pigott who, like Justice Ginsburg, authored only 1.

Finally, combining all of this in one of those cluttered--if visually demonstrative--charts:
CHART 4 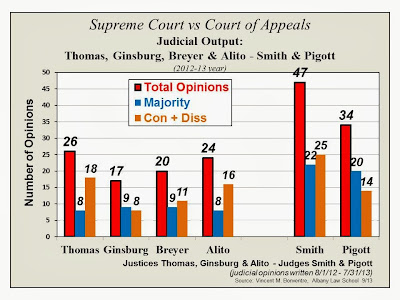 What the chart helps underscore is the comparative outputs of the Justices and the New York Judges across the board. Not only did each of the 2 New York Court of Appeals Judges write considerably more total opinions that any of the 4 Justices, but combined, the 2 of them authored nearly the same number as did the 4 Justices combined.

So there it is. The same patterns we've seen in previous posts with other Justices and Judges. The judicial output--specifically, the number of written opinions--of the members of the New York court surpassed that of the Supreme Court Justices and, with a few exceptions, significantly so.

In the next post, we'll combine all the data thus far considered in this series in a few charts. This will give us visual comparisons of the judicial outputs of all the 7 Justices and 5 Judges we've looked at in these first several posts.