Graphic Recap: Roberts to Alito - Lippman to Pigott (Part 5 of Supremes vs NY Court of Appeals: Judicial Output [with Charts!])

Before going further, let's recap what we've seen so far. Some of this will be striking.

We'll do it in a few relatively uncluttered graphs that will help to make the comparative numbers stand out.

Let's start the recapping with the figures for total judicial opinions. That is, the sum of majority + concurring + dissenting opinions authored by each of the Justices and Judges we've considered in the preceding posts. And we'll now include the average number for each court. 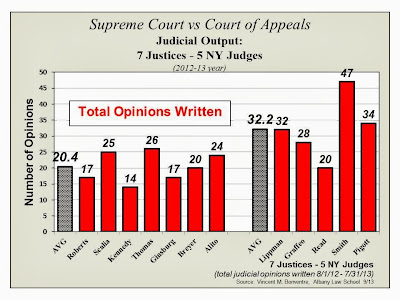 Chart 1 reflects what we've been seeing in this series. In general, the judicial output of the New York Judges exceeds that of the Supreme Court Justices. Significantly so. (And as we'll see, the contrast in the next few charts is even sharper.)

Of the 5 New York Judges, 4 of them (Lippman, Graffeo, Smith, and Pigott) authored more judicial opinions than any of the 7 Justices. Even the remaining New York Judge (Read) wrote more than 3 of those Justices and the same number as 1 of them.

Stated otherwise, none of the 7 Justices authored as many judicial opinions as 4 of the 5 New York Judges. Only 3 of them wrote more than the other Judge.

But as sharp as that contrast is, it is sharper still when we look behind these numbers.

Specifically, when we consider majority opinions. That is, when we look at the the number of judicial opinions that actually decided the cases before the respective courts. The opinions that garnered at least a majority of the votes and represented the opinion for the court itself.

So again, how many did each Justice and Judge author, and what are the averages for the 2 courts? Let's look. 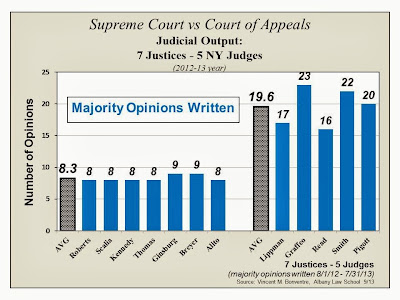 Could it be more clear? Indeed, as mentioned previously, it is striking. Every one of the 5 New York Judges authored many more majority opinions--i.e., again, deciding opinions-- than did any of the 7 Justices. Not even close.

(And yes, to repeat what was said in the first post in this series:


I know there's the but, but, but, and the yet, yet, yet, and the what ifs, and the did you considers, etc....
For whatever reason--and partisans of each court will certainly have theirs--the [Judges] of New York's highest court ha[ve] been much more prolific in producing judicial opinions than ha[ve] been [the Justices]. These are just the facts. Unembellished, unelaborated, unexplained--but still the facts.)

Now let's take a quick look at the other judicial opinions. Those opinions other than majority that make up the total for each Justice and Judge. That is, the separate concurring and dissenting opinions. 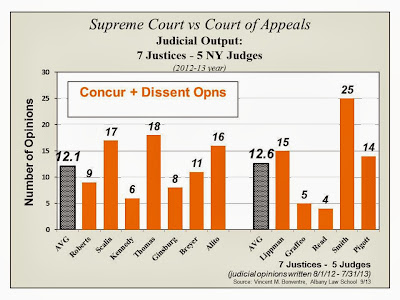 Ah! This chart makes clear why the numbers for total judicial opinions written by the Justices compared to the New York Judges are even close. On average, the Justices wrote approximately the same number of non-majority opinions as did the Judges.

New York Judge Robert Smith is the most prolific in this category by a considerable margin. After him, however, are 3 of the Supreme Court Justices. At the other end of the spectrum, the numbers for 2 of the New York Judges are the lowest among all the Justices and Judges represented here.

Finally, let's give this majority versus non-majority contrast some perspective. Let's juxtapose the averages for majority opinions and separate concurrences + dissents. Here it is. 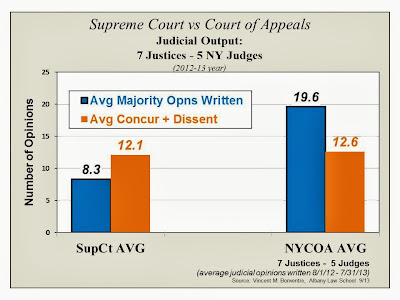 There it is. Two things jump out from the chart. (Well, at least 2, but they're the most salient for our purposes.)

The average number of majority opinions (i.e., yes, deciding opinions) authored by the New York Judges dwarfs the number for the Supreme Court Justices. We saw that above in Chart 2.

But here's the second point. On average, the Supreme Court Justices wrote more separate concurrences and dissents (i.e., opinions that did not decide the case) than majority opinions (i.e., opinions which did). The reverse is true for the New York Judges.

Make of it what you will. Those are just the facts.

In the next post, we'll look at the remaining Justices and Judges--the 2 most junior of each court. There is a wrinkle however. The 2 junior New York Judges were only recently appointed and, in fact, neither has served on the Court of Appeals for even a half year. We'll figure some way to handle that.